The first recorded evidence of a Jewish presence in England were the Jews of Normandy, who came with William the Conquerer, in 1066 AD.   The Jews in England flourished  and dispersed themselves into the towns of medieval England. The English communities which had  a  large Jewish population, large enough to sustain a synagogue were:  Bristol, Cambridge, Canterbury, Colchister, Exeter, Gloucester, Hereford, Lincoln, London, Northhampton,Norwich, Nottingham, Oxford, Stamford, Winchester, Worcester and York.

Unfortunately peace for the English Jews was short-lived; beginning in 1189, massacres and anti-Jewish riots began.  In 1290, the Jews were expelled from England. Elizabeth Hirschman in When Scotland was Jewish proposes many of the Jews emigrated to Scotland where they joined Scottish Jews who had already established a presence a few centuries earlier. Thus the Jews in Scotland and few remaining Jews in England learned a valuable lesson which was to assimilate as a protective measure against losing their fortunes and their very lives.

Holland  had a large number  of practicing Sephardic Jews. Jewish historian Rabbi Gil Marks gives this opinion, “Before reaching Plymouth Rock, the Pilgrims spent several years in Holland, where they came into contact with Sephardim who had immigrated to that country following the expulsion from Spain.”

Amsterdam had a large community of Sephardic Jews and Leiden, where the Pilgrims settled,  had a small community of Sephardic Jews.  It would be likely The Separatists engaged in dialogue with and subsequently were influenced by their Jewish neighbors. Perhaps as residents of Nottingham, it is possible some of  The Separatists represented a remnant of the English Jews who once populated Nottingham?  Also it is possible refugee  Converso/Crypto Sephardic Jews, keeping their Jewishness a secret, settled in Nottingham after fleeing Spain/Portugal, and joined The Seperatists. No matter what their background, openly Jewish culture and doctrines surely  would have attracted their attention. The people and the government in Holland encouraged tolerance and diversity. This openness was a breeding ground  for religious and philosophical debate.

After a few years in Holland,  the Pilgrims discovered it had a  downside; Holland’s liberal society tempted  their children into seeking a frivolous Dutch lifestyle; and choosing to speak Dutch rather than English.  The Separatists were also harassed by King James’ spies.  Desiring to go to a new place in the pristine wilderness of the Americas where worldliness and persecution  would not affect them; The Separatists sold themselves into servitude for seven years to  the Merchant  Adventurers, who financed their journey.

While in England, the Puritan extremists sought to replace English Common law with Biblical laws of the Old Testament,  Unsuccessful in their bid to change English law, in America,  they were free to enact their own laws. Later, Plymouth Colony and the Massachusetts Assembly passed the “Capital Laws of New England” based almost entirely on the Mosaic law. The Separatists saw themselves as “God’s New Chosen/Covenant people”.  The Separatists viewed their journey from England as a replica of the Jewish exodus from Egypt. England became Egypt, the King Pharaoh, the Atlantic Ocean the Red Sea,  and America the land of Israel. The Separatist Pilgrims became the new Israelites entering into a new covenant with God in a new Promised Land.

The Pilgrims  called themselves “Saints”, and others who were not Separatists, but  joined their group were called “Strangers”. The Saints and Strangers all became known as the Pilgrims. Aboard the Mayflower they set  out for the Americas on the Mayflower in 1620. We all know the tale about the first hard winter and the help from the local Indians. After a successful harvest the Pilgrims had a Thanksgiving Feast dedicated to God and invited their new Indian friends.

Many American Jewish historians believe when the Pilgrims  celebrated the legendary first Thanksgiving in the New World, their conscious frame of reference was Sukkoth: a Jewish holiday of  Thanksgiving to God. “Thepilgrims based their customs on the Bible,” says  author Gloria Kaufer Greene, “They knew that Sukkoth was an autumn harvest festival, and there is evidence that they fashioned the first Thanksgiving after the Jewish custom of celebrating the success of the year’s crops.”

Linda Burghardt, author of Jewish Holiday Traditions, says, “Sukkoth is considered a model for Thanksgiving. Both holidays revolve around showing gratitude for a bountiful harvest.”

I have noticed the traditional symbol of the horn of plenty resembles the shofar. The shofar is a ram’s horn blown on Rosh Hashanah, also celebrated in Autumn. 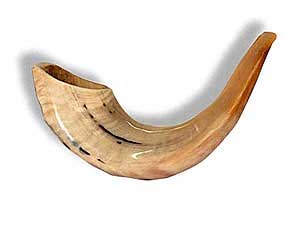 The Horn of Plenty or Cornucopia has ancient roots in representing a goat, or sheep or rams horn and abundance of harvest.  I see a similarity between the two symbols. 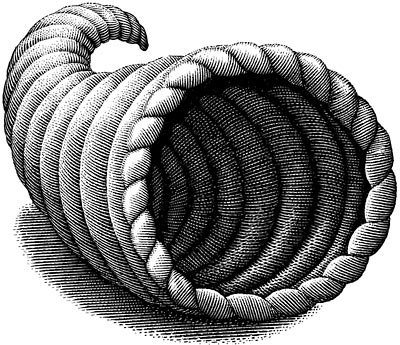 Our family celebrated Sukkoth this year with a local Messianic synagogue. Thanksgiving feels a lot like the harvest festival of Sukkoth and this is no coincidence. The pilgrims invited local Indians to the first Thanksgiving during the fall of 1621. Historians speculate that this celebration occurred somewhere between Sept. 21 and Nov. 9, but most likely in early October, around the time of Sukkoth.  Jews also have a Kabbalist tradition of inviting honored guests to Sukkoth. Sephardic Jews were Kabbalists.

“When you sit in the sukkah, ‘the shade of faithfulness,’ the Shekhina spreads Her wings over you and… Abraham, five other righteous ones, and King David, make their dwelling with you…Thus you should rejoice with a shining countenance and every day of the festival together with these guests who lodge with you… (Zohar Emor, 103b) Kabbalah commentary

Inviting  their honored guests, the Native Americans, fits nicely into the theory  the Pilgrims were celebrating their Protestant version of Sukkoth.

The influence of  Jewishness was  felt in New England over several generations. The earliest legislation of the colonies in New England were all determined by scripture. In 1639, John Davenport clearly stated the Bible was the legal  and moral foundation of New England.  The Code of 1655 contained 79 statues, half which contained Biblical references,  and virtually  all from the Hebrew Bible.

Hebrew also played a primary role in the founding of various colleges included Harvard, Yale, William and Mary, Rutgers, Princeton, Brown, Kings College/Columbia, John Hopkins and Dartmouth.  Some of these colleges adopted Hebrew words or phrase as part of their seal.

The Yale seal shows an open book with the Hebrew words “UrimV’ Timum” (Urim and Thummim). This symbol was on the breast plate of the High priest in the Temple. 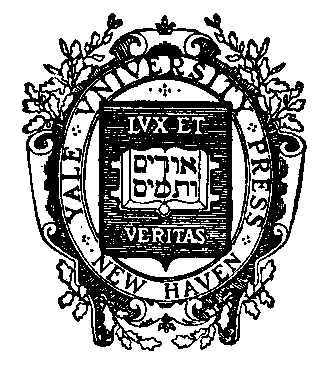 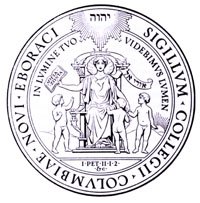 Dartmouth uses the Hebrew words meaning “God Almighty” in a triangle (Kabbalist symbol) in the upper center of its seal.

So popular was the Hebrew language in the late 16th and early 17th centuries,  Hebrew was the course requirement in virtually all of the colleges.  Several commencement orations were given in Hebrew.  Amazing, because no college in England, at the time, offered Hebrew.

At the time of the American revolution, knowledge of the Hebrew language was still so common, certain members of congress proposed Hebrew be formally established in the United States. Interesting to note, the love of Hebrew ended with the language and did not automatically  include the Jewish people. However the Sephardim, because of their ability to assimilate, were more readily accepted than the socially awkward Ashkenazi who came later.

So begs the question, when did the first “real Jews'” appear on the American scene? For those of you who are interested, Stephen Birmingham wrote a lively and fascinating non-fiction book ( it reads like fiction) titled The Grandees: America’s Sephardic Elite. It chronicles the history of the first families of openly practicing Sephardic Jews in the American Colonies who arrived in 1655.  It is interesting to note the colorful and quirky ancestors who bravely defied Catholicism; their just as colorful and quirky  descendants  were disassembled by Protestantism in just a few generations.

12 thoughts on “Part VII Sephardic Jews and the LDS Connection: The First Thanksgiving or Sukkoth in America”