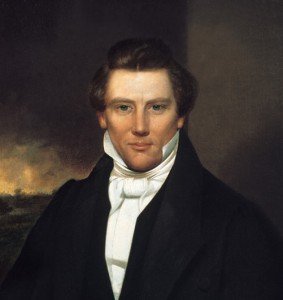 Presuming Sam’s book was therefore “safe,” I began reading. I was a child who was shocked to hear detractors had called Joseph Smith “Joe.” I was completely unequipped to deal with the salacious accusations made by John Bennett and Thomas Sharp, repeated in Sam’s book. My teenaged testimony was crushed. Though God seemed to opine that I should remain an active Mormon, I white-knuckled for two decades harboring serious doubts about Joseph and the Church.

I went on to graduate from Seminary, earn the Young Womanhood in Recognition Award, be a Relief Society President, serve a mission, and marry in the temple. In 1999 I realized that the God at the center of Joseph Smith’s theology is the God I have experienced in my life, but I still had no comfortable explanation for Joseph and polygamy.

In 2001 a friend asked me to present a 5-minute spotlight in Relief Society on a notable Mormon woman. As she rattled off a list, I heard her mention the treasurer Emma selected for the first Relief Society, Elvira Annie Cowles. Annie was my ancestor, so I picked her.

By 4 am that Sunday I had pieced together the fact that Annie (one of Joseph Smith’s plural wives) was mother of the three women who married Job Welling and grandmother of two women who married Apostle John Whitaker Taylor in 1901. In an example of the conversations Mormons sometimes have with God, I heard Him say:

“You must write about these women.”

God, however, is persistent. I argued with Him for several years, certain that the story of Joseph’s plural marriages necessarily involved sexual relations. When Elizabeth Smart was kidnapped and other sordid polygamy stories emerged, I continued to think He was nuts.

In 2006 I decided to approach the story in novel form. I was then certain Joseph and Elvira had been intimate, but decided I couldn’t portray that in my novel. Revisions conducted with dozens of advanced readers forced the story to take on a life of its own. One reader criticized my villain, Dr. Bennett, as one-dimensional. Another said I should tell the story from a male standpoint to retain male readers. Another man (a non-Mormon) said the sexual tension between my heroine and Joseph Smith was uncomfortably intense. As I warped the story in response to these comments, I had to dig deeper into extant facts, delving beneath the facile understanding I’d had of events and motivations. Causalities emerged that I’d previously been blind to.

Some of my friends live without any form of birth control. I saw in their lives the typical pattern for most married couples in the 1800s. A child is born within the first year, and other children arrive every two years thereafter. Watching these friends, I realized something was wrong with Annie’s reproductive history.

Annie’s first child was born in October 1845, nearly three years after her public marriage to Jonathan Harriman Holmes and over a year after Joseph’s death. Annie continued to bear children regularly whenever Jonathan was around, her second daughter showing up nine and a half months after Jonathan’s return with his Mormon Battalion unit.

Clearly Annie and Jonathan were fertile. Joseph had children with Emma regularly. And yet Annie didn’t produce a child for years after the ceremonies I presumed would legitimize intimacies.

The other problem with my original (and faith-challenging) view of Joseph Smith’s sexual activities arose as Ugo Perego used DNA to investigate possible offspring of Joseph Smith by plural wives. Not a single suspected child can be proven to have been fathered by Joseph on a plural wife, not even Josephine Lyon. [The inconclusive results obtained in Josephine’s case result from known common ancestry between Joseph Smith and Josephine’s descendants.]

Presuming Joseph had wanted to avoid children, the few methods of birth control available to Joseph were largely ineffective. The rhythm method wouldn’t even be invented until 1910. While lack of children does not prove lack of sex, it leaves lack of sex as a potential cause for the extant data.

Modern belief in Joseph’s sexual activities with women other than Emma is based solely on written reports, only two of which were produced under oath. Both ladies who so testified were given to Joseph when Emma was part of the equation, at a time when they were single and of marriageable age. And they testified to save the Temple Lot from falling into the hands of Emma’s sons. In other words, they had a motive to lie.

Emma told her sons she was Joseph’s only wife shortly before she died. I invite you to explore how Emma might have legitimately been telling the truth, given the extant facts. I find it a compelling and tragic tale full of honor and sacrifice.

[To see the next post in this series, go to Why would a Loving God Demand Polygamy.]

Below is a list of the posts in this series.:

Why would a Loving God Demand Polygamy (9:45)

The Decade of Delay
Six Funerals and a Blessing
Winter of the Reluctant Virgins
Fall of the Doctor (14:58)

Hunt in the City Beautiful
Arraigning the Band of Brothers
Wives of Sorrow (19:33)

Revealing the Revelation
Those Virtuous and Pure
Daughter of Hope
The Prodigal Returns
Conferring the Mantle
Carthage
Collecting the Sorrowful
For Eternity and Time
Fifty Years in the Wilderness
Days of Defiance
God’s Strange Act: A Legacy

65 thoughts on “A Faithful Joseph”