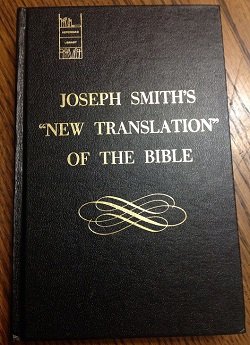 Smith’s Translation of the Bible

[This is the fourth post in a series. To read the series from the beginning, go to A Faithful Joseph.]

You might be scratching your head, wondering what 1831 revelation I am referring to. After all, Joseph did not write down any revelation on plural marriage in 1831. It is not part of the correlated discussion regarding Joseph’s teachings on marriage. The histories of the church published in 1858, 1922, and 1930 don’t talk about it. 1 And many contributing to New Mormon History take the view that Joseph was contorting doctrine to justify his libido-driven actions, without trying to find a revelation that might have caused those actions.

It appears Joseph received the first revelation regarding plural marriage while translating the Old Testament prior to 7 March 1831. 2 When we consider this revelation occurred at that time, the historical and revelatory record comes to life.

The Context for the 1831 Revelation

Most of you are familiar with key historical events leading up to the late winter of 1831:

It is with this background that I take the liberty of spinning a bit of midrash. Imagine Joseph holding the largely-pregnant Emma and discussing baby names after several days of translating Genesis. I can almost hear Joseph suggesting the name Abigail, thinking only of colonial women like John Adam’s wife.

My imagined Emma, however, was warned about all the weird things other religious innovators have done, like the spiritual wifery of Jacob Cochran. She knows her Bible, and she knows Abigail was one of the polygamous wives of King David. We women who have been pregnant know that emotions run high, especially when a prior child has died and we have been severed from any association with the family of our birth. And Joseph has been translating the part of the Bible dealing with the plural marriages of the patriarchs.

Joseph is stunned, he tries to reassure Emma. Perhaps Jacob 2 even enters into the discussion, since it’s mostly an anti-polygamy discourse. Finally, he promises to ask God, to put Emma’s mind at ease.

This background, a heated argument between Joseph and Emma about polygamy, seems sufficient background for the question God answers:

Verily, thus saith the Lord unto you my servant Joseph, that inasmuch as you have inquired of my hand to know and understand wherein I, the Lord, justified my servants Abraham, Isaac, and Jacob, as also Moses, David and Solomon, my servants, as touching the principle and doctrine of their having many wives and concubines—

Behold, and lo, I am the Lord thy God, and will answer thee as touching this matter.

Therefore, prepare thy heart to receive and obey the instructions which I am about to give unto you; for all those who have this law revealed unto them must obey the same.

For behold, I reveal unto you a new and an everlasting covenant; and if ye abide not that covenant, then are ye damned; for no one can reject this covenant and be permitted to enter into my glory. 4

If this revelation came as a result of an argument between Emma and Joseph, it seems natural that Joseph would have shared something about the answer with Emma. There is no indication Emma agreed to the requirements of this revelation and covenant at this time, however.

Even though Joseph refused to write down the revelation at that time, we do see the continued argument Joseph and God engage in after this point. D&C 45 is the first revelation that hints of the turmoil Joseph would have been experiencing at receiving word of the New and Everlasting Covenant:

…I have sent mine everlasting covenant into the world, to be a light to the world, and to be a standard for my people…to prepare the way before me [Jesus Christ]…in the day when I shall come in my glory in the clouds of heaven, to fulfil the promises that I have made unto your fathers… 5

After several pages describing the terrible events that will precede the time when Christ will come in glory, the Lord tells Joseph:

“[It] shall not be given you any further concerning this chapter, until the New Testament be translated, and in it [the New Testament] all these things shall be made known… I give unto you that you may now translate it, that ye may be prepared for the things to come. [Verily], great things await you. 6

At this point Joseph immediately stopped translating Genesis and began working on the New Testament. As per direction in the revelation, Joseph moved his family from the Whitney home in the center of the village to a cabin on the Morley Farm. Here Emma’s pregnancy continued. On April 30, 1831, Emma gave birth to twins, Thaddeus and Louisa, who died hours later.

While I don’t believe God takes children from parents as punishment, Thaddeus and Louisa were the second and third children taken from Joseph and Emma when they could be interpreted as flouting commandment. Joseph and Emma may have therefore seen these deaths as a rebuke from God.

Take Unto You Wives

It is only after the likely revelation in early 1831 that we see mention of men having more than one wife. The first instance is a revelation remembered by William W. Phelps in July of 1831, where seven missionaries being sent to preach to the American Indians are told to “take unto you wives of the Lamanites and Nephites.” 7

Apparently Saints then were as willing to selectively obey as at any time–Phelps didn’t even bother asking Joseph what he’d meant in July 1831 until three years later. There is no indication that any of the men present in July 1831 even considered courting or marrying an Indian woman, or any other plural wife for that matter.

In the New Testament These Things Shall be made Known

Speaking of the resurrection of the dead, concerning those who shall hear the voice of the Son of Man:

Joseph and Sidney proceeded to record one of the most important visions in the formation of Mormon eschatology, or beliefs regarding the ultimate destiny of mankind. The vision describes a heaven of many degrees based on earthly faith and works. The highest, or celestial, level of heaven would be reserved for those who were baptized and sealed 9 by the Holy Spirit of promise.

The 1832 revelation recorded as D&C 76 answered some of Joseph’s questions about the New and Everlasting Covenant he’d been asked to restore the year earlier. Clearly this, more than any other revelation associated with the translation of the New Testament, was the answer Joseph had been promised in D&C 45, about the fate of mankind when the end would come, an initial answer to Joseph’s turmoil about the revelation regarding plural marriage.

Thus by 1831 and 1832 plural marriage had become convolved with Joseph Smith’s beliefs regarding the salvation of mankind and the terrible happenings predicted for the end of times.

It would take Joseph years to act on those beliefs.

Mormon eschatology would evolve further after 1832, to include proxy ordinance work on behalf of the dead, 10 multiple degrees of glory within the Celestial Kingdom, 11 and the sealing of all mankind together via biological and adoptive family lines. 12

13 thoughts on “The 1831 Revelation Regarding Plural Marriage”