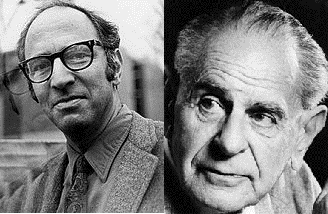 To summarize how epistemology works, the basic idea is that scientific progress is made through a process of conjecture, criticism, and then refutation. Essentially we see something in the world that we wish to have explained or (even more likely) a problem that we can solve if we can explain it.

Now there is no magic way to come up with an explanation. Coming up with an explanation is really just imagination mixed with faith. It is literally an art in the truest sense of the term. When humankind was young, our conjectures to explain the world were what today we call myths. We saw about us a world that was a strange mix of order and chaos. We imagined that the elements moving around us – the wind, the sea, the earth – were really living things that could make conscious decisions about how to behave. These elements were “gods” to some. We explained the elements’ intemperate nature the same way we explain the intemperate nature of any human being – as an act of agency. The Greek Myths explain why the world based on this presumed explanation.

These myths were our early explanations and were the true beginning of our modern scientific knowledge. There is no hard fast boundary between our myths and our science for the same reason there is no hard fast boundary between higher and lower organisms. We have since replaced such explanations with ones that are far more computationally precise, further reaching, and with greater ability to both explain and predict the world around us.

But how can we be sure that our explanations are truly “better” than the previous ones? That is to say, how can we be sure we’re really making progress? Kuhn argued that we could not and he thereby denied the existence of any sort of (what I am calling) Scientific Realism. To him, we simply pursued the explanations that we preferred and that served us best.  To him, not only were our conjectures an art, all of science was.

This principle of being able to get increasingly good at describing reality is called verisimilitude.

At times it’s not possible to run such an experiment because our technology isn’t yet up to snuff. But it is rare that two explanations make absolutely no different predictions.

Stephen Hawking advocates for the idea that it’s possible to have two models that make all the same predictions, and thus both descriptions of reality are equally “true” in some sense. If two models really did make absolutely no different predictions at all, then between those two models, it would not matter which you used. However, don’t be too fast to accept Hawkins at his word here. As I documented in this post one of Hawking’s own examples of two equivalent models actually did make different predictions and thus it was possible to choose one over the other.

But it is not true that they make no different predictions at all. In fact they make some fairly drastically different predictions about things — like the existence of a multiverse. And with the right level of technology, there are ways to test for the existence of a multiverse. (David Deutsch has written about how you might do it by creating a self-aware computer using a quantum computer. This is science fiction right now to be sure.)

Also, there are non-experimental ways to make comparisons between theories. Go back to the Hawking’s example in the link above. (Found here.)  There are non-experimental reasons for one of the models to be preferred over the other. Namely that one of them preserves other physical laws we believe to be true and the other results in a contradiction to our current theories. Experiment and empirical evidence is not necessary to already make an initial judgement about the superiority of one explanation over another.

Likewise, David Deutsch has consistently pointed out that there are non-experimental reasons to prefer the many-worlds interpretation of quantum physics over the other interpretations. (This is for reasons too complicated to explain in this post, but I may attempt to explain why in a separate post later.)

The secret to good epistemology has always been our ability to compare one explanation to another. While Kuhn is right that, we being human, this comparison is done through a very imperfect social process, the fact is that reality always prefers one of our explanations over another once we finally come up with the right way to ask her. So the two theories are never truly incommensurable.

It’s a great boon that we do have the ability to determine which of two explanations is better because this means that scientific progress is possible. That is to say, scientific progress is directly tied to the existence of Scientific Realism (which I use to mean there actually being something specifically going on in reality that we can actually explain with increasing levels of verisimilitude”) being true.

This process of comparing explanations and picking the better one is the process of “refutation.” At any given moment we have our current best theories but we never know when someone might at last conjecture something superior to it and “refute” the current theory.

Karl Popper liked to speak of this process as “falsification” and even went so far as to claim that what separated empirical science from non-empirical science (today people mistakenly call this ‘non-science’) was that empirical science could be ‘falsified.’ Vacuously, Popper was right about this if by “falsification” we mean “falsifying one theory through the existence of a better one.” But in reality, we might as well just call this process “verification” instead. (A point Kuhn makes.) It’s odd, really, that the very thing Karl Popper is most famous for was one of the few things he really didn’t get right.

Further, the existence of theories like String Theory (which wasn’t around at the time of Karl Popper) has forced us to accept that finding evidence predicted by a theory but not denied by its competing theory can be acceptable evidence for preferring one theory over another. So while string theory probably can’t be falsified in the sense of finding empirical evidence against it, it can literally obtain a sort of verification that is nothing like what Popper originally had in mind when he spoke of falsification.

So we do not falsify our theories, per se, but rather we compare theory to theory or explanation to explanation and we pick the better of the two.

Because this process of coming up with conjectures and rejecting the worst of the two theories is how we make scientific process, it’s not hard to see that there is a deep tie between scientific process and “natural selection.” Through our processes of group criticism and refutation (science is always a community activity) only the best theories survive or are selected for continued use. The last explanation standing is the current paradigm only because it’s the best one currently known.

This means that our explanations are forever just conjectures. Yes, they are the best conjectures to survive this process of natural selection. And thus we can rest assured that they have the greatest verisimilitude (closeness to reality) of all currently conceived conjectures. But we can never do more than tentatively accept them. Therefore, there is a sense in which science is not about finding Truth, per se, but merely about finding the best approximations of the truth.

Science as Approximations of Truth

And in fact we often keep ‘refuted’ explanations around precisely because there are circumstances were they work as sufficient approximations of reality.

Newtonian Physics was once believed to be impregnable. Then one day it was refuted in favor of Einstein’s General Theory of Relativity. I have often seen it said that Newtonian physics was not refuted, but rather Einstein just added to it. But Kuhn leaves no doubt that this isn’t the case. For every Newtonian equation there is an even better Einsteinian one. Because they often make predictions so close together – particularly when moving at slow terrestrial speeds – it’s often easier to use the Newtonian equations which are often simpler to calculate. But Einstein’s physics did not add to Newtonian physics, it replaced it lock-stock-and-barrel.

Embracing Our Approximations of Truth

So proper epistemology is to take the current best theory and to whole heartedly but tentatively accept it. Until something better is discovered, the best theory is the best theory. We do ourselves intellectual harm to not assume it to be fully true and to follow it through to its logical conclusions. If it’s logical conclusions become unacceptable at some point – say because they result in a mismatch from observation – then we have found a problem with the current theory.

You Can’t Falsify Science Through Observation, So We Need Apologetics

Does finding a mismatch from the current theory thereby ‘refute’ it? No, never! (Well, never in the case of any mature theory anyhow.) The only way we can ‘refute’ a theory is by coming up with a better one. We simply live with observational mismatches or we come up with apologetic explanations for them. This makes sense for two reasons. The first is that there is no point abandoning a good theory in favor of no theory. The second is that it’s not really possible to ever be sure a mismatch to a theory is in fact a mismatch.So scientists do not falsify a theory through empirical evidence. In fact, Khun points out that typically scientists find some apologetic way to defend the prevailing paradigm.

These apologetic explanations to shoe horn observations to the explanation are not exceptional circumstances. Kuhn points out that this is really the norm for science. There are so many observation problems that our apologetics for the existing theory more often than not turn out to be right – no matter how far-fetched they initially sound. The existing theory deserves to be rigorously defended in this apologetic sort of way. If everyone just “followed the evidence” (a phrase that should cause everyone to burst out laughing) and assumed that the theory must be wrong because we found a missed observation, scientific progress would probably be impossible for us.

We are, after all, only human so a missed observation could just be a mistake. Or it might require a tweak to the current theory or the introduction of some new error factor. We can never be sure.

Paradigm Shifts Are One Eternal Round

But on rare occasions such an observational mismatch will not yield to apologetics and will eventually become the very problem that forces us to abandon the current theory in favor of an even better conjecture. This is what Kuhn calls a paradigm shift. And the whole process starts over again.

So this is my (relatively) brief summary of what we currently know about how we gain knowledge.

31 thoughts on “How We Gain Knowledge”