These are just some thoughts that I’ve had swirling in my head for a while now, but with the release of the new Church Handbook today, I’ve seen a lot of wailing and gnashing of teeth on the socials from people who style themselves as LGBT “allies” in anticipation of what they think the new Handbook will say.

One tweet said, “We need to mourn with our LGBT friends that mourn today and not remind them of the commandments” (???????)

There was another tweet about the supposed harm the Church does when it makes clear policy and doctrinal statements regarding the Law of Chastity, moral behavior, marriage and family relationships. I’ve seen it called “spiritual violence”.

Needless to say, it’s a full sack cloth and ashes day for some.

END_OF_DOCUMENT_TOKEN_TO_BE_REPLACED

When it comes to “the loving thing to do,” we continue to reach very different conclusions in the American conversation on sexuality.  Why? Our convictions about love, I argue below, arise directly from other convictions about happiness and identity itself...all of which explains contrasting evaluations of whose teachings are “loving” and whose are “destructive.”

With another Pride month upon us, rainbow flags everywhere remind us about who has decided to love gay people in their neighborhoods. But what does that really mean? And is it a question about which thoughtful, good-hearted people could legitimately, honestly disagree?

Maybe not. It’s become so common to equate support for the formalized gay rights movement with loving people more, that when a question or concern is raised about this same movement, it’s become almost automatic for (many) people to label the person raising the question as obviously “unloving.”

And when someone suggests (as I have) that it’s possible to love gay people in a different (perhaps even better) way than is being called for in the gay rights movement, perhaps we shouldn’t be surprised with the responses.

END_OF_DOCUMENT_TOKEN_TO_BE_REPLACED

After the passing of his dear older brother, Jacob stood before the people of Nephi with an earnest interest in “consoling and healing” them through the “pleasing word of God; yea, the word which healeth the wounded soul” (Jacob 2).

Even while doing just that, Jacob also admitted feeling “weighed down with much desire and anxiety” for his people’s welfare – to the point that he felt constrained to share other things he acknowledged would likely “enlarge the wounds of those who are already wounded.”

In particular, Jacob knew that his cautionary words about sexual boundaries being crossed among his people would be painful for some listening, which made his deeply-felt obligation to speak personally painful as well:

Wherefore, it burdeneth my soul that I should be constrained, because of the strict commandment which I have received from God, to admonish you according to your crimes, to enlarge the wounds of those who are already wounded, instead of consoling and healing their wounds; and those who have not been wounded, instead of feasting upon the pleasing word of God have daggers placed to pierce their souls and wound their delicate minds. (Jacob 2)

I believe the prophets in our day feel a similar pain, especially when teaching about issues they know are sensitive, and deeply personal. But like Jacob of old, they feel “constrained” to speak what God puts on their hearts – recognizing that whatever pain some might feel in their words, they are necessary to address a deeper woundedness that exists independent of their words.

Wounded America.  There are enough wounds to go around in America today – of all kinds, and in all directions.  Even more pervasive and life-threatening than physical wounds are those tearing at hearts, and minds – spirits and souls. In particular, lots of people feeling wounded when it comes to questions of sexuality today. The pain is real, often overwhelming, and sometimes even lethal.

END_OF_DOCUMENT_TOKEN_TO_BE_REPLACED

If you’re on social media (have you liked the Millennial Star Facebook page yet?), you might have noticed a lot of activity surrounding the dedication of the Rome, Italy temple in the last few days. All the members of the First Presidency and Quorum of the 12 were in attendance at the dedication. There was also a new picture of all 15 men taken in the Visitor Center in front of the Christus and 12 apostles statues. 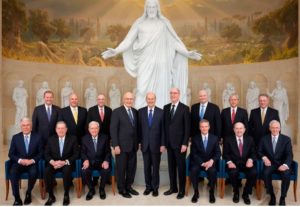 Today, the Church released this video of our apostles and prophet reading passages from “The Living Christ.” The Living Christ was released by the Church in 2000, declaration to the world of our belief in Jesus Christ. Here is the video, I hope you will share it with your friends of all faiths.

Elder Christofferson conducted the meeting and took a few minutes to explain the process of how the new president is chosen and how things are organized, he also bore his testimony of the meeting, “As a participant, it was sweet, sacred experience in which the Lord’s will was clearly manifest and all were in full accord. This experience confirmed once again that Jesus Christ directs His church.”

He also explained that by choosing the senior most apostle to be the president of the church, posturing or campaigning for position is eliminated, that this process provides continuity and that the one who becomes the new president has been prepared for this calling. He also quoted Elder John A. Widtsoe, “This is a wise procedure. It places at the head of the church the apostle who has been the longest in service. He is known well to the people and trusted by them. He himself knows the procedure of church affairs. He is no novice to be trained for the position.”