END_OF_DOCUMENT_TOKEN_TO_BE_REPLACED

So my wife says, “oh, I saw a funny shirt today.” My wife loves to share funny things she heard or saw. The shirt said “I’m right 93% of the time and who cares about the other 4%”

My kindergartener starts to laugh and then says, “Hey, I know a funny shirt too.” So she tells us about a shirt that we already bought for our son months ago that has a picture of a rock and a ruler. The Ruler is saying “You Rock!” and the Rock is saying “You Rule!”

We all bust up laughing and she is happy. But the thing is that it’s not funny because of the “funny once” rule. You can’t actually repeat a funny joke multiple times and expect to get the same laugh each time. So why are we laughing? It’s real laughter too.

Well, of course, it’s because our daughter is hilarious precisely because she doesn’t “get it” that she isn’t funny. Thereby making her funny. So she’s funny because she’s not funny. It makes no sense, so of course it makes perfect sense.

A lot of children have selective hearing; have you noticed?  Some of this selective hearing is planned and some isn’t.  They really don’t hear us correctly sometimes.  We can do something to make sure this doesn’t happen as often.

It is never a good idea to start an instruction with the word don’t, because whatever you say after don’t might be the part of the instruction that they think they have to follow.  Here is a classic example. END_OF_DOCUMENT_TOKEN_TO_BE_REPLACED 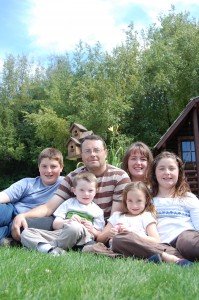 As I was thinking about what question would beneficial to answer today on M*, I realized I had just answered questions this morning on television which might be of interest to M* readers.  Today my husband and I had a great day with Debbie and Ron on The KJZZ morning show hosted by KUTV2 news station.  I hope these video clips will be interesting and useful to you and your family.  Today’s topic was consequences and how to choose them.  Remember, “Home should be the safest place to make mistakes.”  (Parenting A House United)

Below are the links to the two segments we appeared in.

Last month we also appeared on the show and will on the second Friday of each month.  Below are the links to last month’s segments. END_OF_DOCUMENT_TOKEN_TO_BE_REPLACED

There are certain skills I teach my children for successful communication in my home.  Two of the main skills are Following Instructions and Accepting No Answers.  These are two of the basic skills for showing respect to parents and for learning how to respect any authority, even God.  People who can’t do these basic skills are very noticeable in society.

However, learning these skills takes lots of practice and really goes against our selfish tendency to disconnect and END_OF_DOCUMENT_TOKEN_TO_BE_REPLACED