Sitting there in Sacrament meeting, her finger would move under the words of the hymns we sang so I could follow along. I never could figure out why it jumped down the page at the end of each line. Why didn’t it go to the next line like normal books? I never thought to ask outside of the meeting, and if I spoke to her during the meeting she would usually just give a slight shake of her head that I knew meant she wasn’t going to answer right then. Not during Sacrament Meeting. That was sort of a special, unspoken rule of Sacrament Meeting. But I didn’t feel ignored. Her eyes and hands and arms and smiles were right there with me, even though her voice was silent most of the time.

Except during the hymns. I loved hearing that sweet, quiet vibrato sing along. She was not confident about her voice; someone had told her in her youth that she “couldn’t carry a tune in a bucket.” It made no sense to me. I had a good enough ear to know that my Mama never sang off key. I vowed then that all my life I would encourage others like her to sing out with joy. Nobody sings better than my Mama; and to her credit: although she didn’t care to sing for others, she always sang to the Lord—and to me.

I vaguely remember her prompting me: “The Church of Je – sus Christ …. of Lat – ter; Day; Saints.” I would repeat it back to her as best I could. When finally I had it right, for many weeks during Sacrament Meeting I would pull her left ear down to me (I never tried to speak to her right, which couldn’t hear; she had trained me on that) and whisper, “The Church of Jesus Christ of Latter-day Saints!” No matter how many times I did it, she beamed as if it were the first time as she barely nodded at me—a cue to be still. 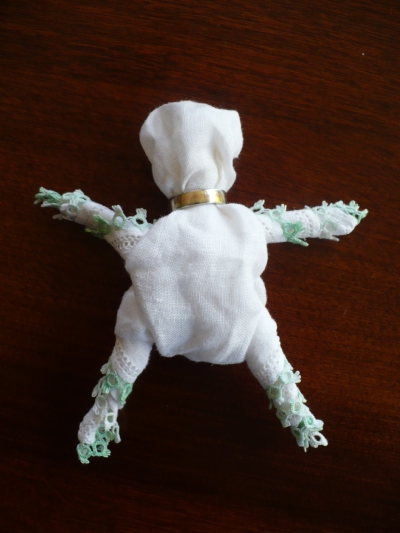 One activity I resorted to almost every week was to study Mama’s hands. They were so beautiful. She would laugh when I told her that, and I didn’t understand why. Her nails were pearly white and oval-shaped, from the steel file she kept in her purse. I wished my nails were pretty like hers. I loved to trace the veins on the back of her hands. She said they were work hands. I really, truly thought they were beautiful.

Sometimes when I had a hard time waiting for the meeting to get over she would silently pull out her little white lace hanky and roll the two sides from the ends. Then she would fold it over and pull out the four corner tips to make arms and legs. To finish it off, she did something unbelievably magical: She put her diamond wedding ring around the little pinched-cotton neck and my Sacrament Meeting Dolly had on jewels fit for a queen. That was the only time she ever took that ring off, that I knew of. Sacrament Meeting had special rules for everything, I think.

Sometimes she would play the organ for the meeting. Sometimes I was allowed to sit up there by her in a choir seat behind the organ; but mostly I just sat with the rest of the folks down in the congregation. I loved it while she was playing, and I wanted to be with her when she wasn’t.

Once in a while she would stand at the pulpit and say words that came to her right there in the moment. She seemed so reserved most of the time; but when she stood up there she wasn’t shy at all. I didn’t know the word for it then, but in retrospect I would call it: conviction. Mama was transformed when she stood to say what she knew. Sacrament Meeting did wonderful things to people.

Lots of lessons happened in Sacrament Meeting; like, you put your knees and your ankles together when you sit. And, keep your skirt pulled over your knees. Don’t turn around in your seat. Don’t put your hands up where you’ll catch others’ attention. Don’t lay down. Listen to the speaker. Don’t whisper and giggle. Do get out your scriptures and follow along. 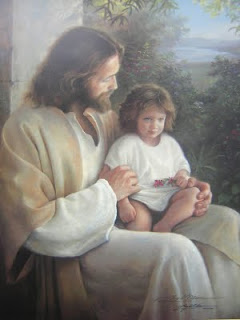 Greg Olsen, "Forever and Ever"

Now when I sit in Sacrament Meeting and my 5 year old asks me in my right ear why my lips move when the priests talk, I explain that it is to help me think about the words. She traces the veins on the back of my hands while I sit with head bowed. I shake my head wordlessly when she speaks to me while the bread and water are passed. I help her sit front-ways, with her skirt pulled over her knees. And sometimes, I stand and use my voice to testify, like my Mama did; and when I return to sit by her, my daughter is all smiles and hugs and I know she feels warm and happy and loved. Sacrament Meeting does that to a person.

14 thoughts on “Sacrament Meeting Does That.”