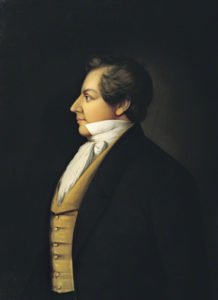 Facebook reminded me today of a post I wrote a few years ago about how I gained my testimony of the Prophet Joseph Smith. From the original post:

“Growing up in the Church I think I look the life and Marytrdom of Joseph Smith for granted. I never really thought about my own testimony of Joseph Smith I just always thought I knew he was a prophet, because everyone around me said he was. Thankfully, that changed. Twenty years ago, on the 150th anniversary of the Martyrdom, there was a fireside broadcast in commemoration of the event from Carthage Jail in Illinois. President Howard W. Hunter and his councilors were going to be there as well. I was a young single adult at the time, attending a student ward. We had the last block of meetings in our building that day, and everyone had planned on staying for this broadcast. I really didn’t think much about it; in fact I didn’t even know that June 27th was the exact day Joseph Smith had been killed. But my friends were going to be there, so I stayed.

The service started with and opening song and a prayer and there were speakers. I don’t remember what they said at all. But near the end of the program there was a congregational hymn. I can’t even remember what song it was we were to sing, “Praise to the Man,” or “A Poor Wayfaring Man of Grief?” It didn’t matter. The camera panned to President Hunter, who was in a wheelchair and who looked uncomfortable in the heat of a late June afternoon in Illinois, but he was singing and enduring it well I thought. It was at this time that the Spirit spoke to my heart and my mind. “Joyce, Joseph Smith was the Prophet of the Restoration. And all the power and keys which were given to Joseph, reside with that man there, President Hunter. He is the living prophet – follow the prophet!” From then on, and for the last 20 years, I have had an abiding testimony of Joseph Smith. I know he was a prophet of God.”

You can read the whole post by clicking HERE. 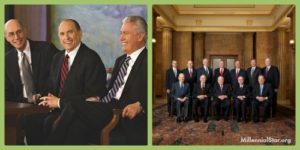 I still testify that Joseph Smith was the prophet of the restoration. That has been made manifest even more this year, as I’ve had the opportunity to teach Church History and the Doctrine & Covenants in our ward’s Gospel Doctrine class. We have living prophets on the earth today, and we will always do well to follow their council and teachings in all things. Helping others follow the prophet is also one of the most important things we can do. If you are struggling with something, look to what the living prophets have said and taught us. They love us, and want us to return to our Heavenly Father and Jesus Christ. Their words are the words the Lord and the Savior would speak if they were sitting next to us. Listen and follow!

What I hope to do in this post is list a few resources that a seminary/institute (or even a really dedicated Sunday School teacher) could read to help them get the knowledge to either give good answers to these questions or to know where to look and find the answers. END_OF_DOCUMENT_TOKEN_TO_BE_REPLACED

I see too many, usually of the progressive stripe, constantly trying to determine what Joseph Smith intended to do, where he would have gone – ordain women, have a different church structure, whatever.

This is pointless, really (and I’ll use C.S. Lewis to show how). END_OF_DOCUMENT_TOKEN_TO_BE_REPLACED