This Friday, June 27th, marks the 170th anniversary of the martyrdom of the Prophet Joseph Smith and his brother Hyrum. As this anniversary has approached my thoughts understandably have turned to those events on that tragic summer day so many years ago. In Doctrine & Covenants 135: 4 we read, “When Joseph went to Carthage to deliver himself up to the pretended requirements of the law, two or three days previous to his assassination, he said: “I am going like a lamb to the slaughter; but I am calm as a summer’s morning; I have a conscience void of offense towards God, and towards all men. I shall die innocent, and it shall yet be said of me—HE WAS MURDERED IN COLD BLOOD.” More than anything, this has settled into my heart this week. Joseph knew what his fate was when he left Nauvoo. He knew. And yet, he went, he didn’t fight it, he went. And because he went, he sealed his testimony with his blood. He gave everything for the Lord and the cause of the Restored Gospel. 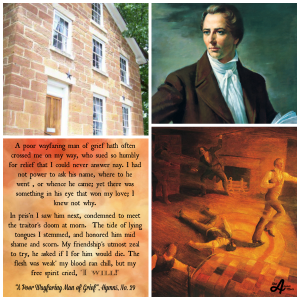 Growing up in the Church I think I look the life and Marytrdom of Joseph Smith for granted. I never really thought about my own testimony of Joseph Smith I just always thought I knew he was a prophet, because everyone around me said he was. Thankfully, that changed. Twenty years ago, on the 150th anniversary of the Martyrdom, there was a fireside broadcast in commemoration of the event from Carthage Jail in Illinois. President Howard W. Hunter and his councilors were going to be there as well. I was a young single adult at the time, attending a student ward. We had the last block of meetings in our building that day, and everyone had planned on staying for this broadcast. I really didn’t think much about it; in fact I didn’t even know that June 27th was the exact day Joseph Smith had been killed. But my friends were going to be there, so I stayed.

The service started with and opening song and a prayer and there were speakers. I don’t remember what they said at all. But near the end of the program there was a congregational hymn. I can’t even remember what song it was we were to sing, “Praise to the Man,” or “A Poor Wayfaring Man of Grief?” It didn’t matter. The camera panned to President Hunter, who was in a wheelchair and who looked uncomfortable in the heat of a late June afternoon in Illinois, but he was singing and enduring it well I thought. It was at this time that the Spirit spoke to my heart and my mind. “Joyce, Joseph Smith was the Prophet of the Restoration. And all the power and keys which were given to Joseph, reside with that man there, President Hunter. He is the living prophet – follow the prophet!” From then on, and for the last 20 years, I have had an abiding testimony of Joseph Smith. I know he was a prophet of God. 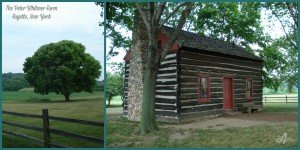 Fast forward to 2008, my husband and I had the opportunity to go back east and visit the Church History sites, specifically The Hill Cumorah and Western New York. The Sunday we were there, we attended church in the Fayette Ward, which meets on the grounds of the Peter Whitmer Farm, where The Church of Jesus Christ of Latter-day Saints was organized in 1830.

We arrived at the building about 45 minutes early. We took the time to walk around the grounds and sit and reflect on the Restoration of the Gospel and the organization of the Church so many years ago. The spirit was peaceful and strong. It was a lovely quiet morning, and the surroundings were beautiful. A light misty fog slowly burned off the land, as the sun rose. I imagine this is how things looked so many years ago, when Joseph Smith was a visitor to the farm.

As we entered the building, the members of the ward greeted us kindly and enthusiastically. We were treated as brothers and sisters, not merely visitors for the day. For the opening song in Sacrament Meeting, that Sunday we sang Hymn No, 27, “Praise to the Man”. I had what I thought was a good testimony of the Prophet Joseph Smith, and had many witnesses of this fact, but on that day, singing about the Prophet, Brother Joseph, in the place where he’d walked and lived, the Holy Spirit bore another powerful witness to me that, indeed, Joseph Smith was the prophet of The Restoration, and of the modern days.

I am thankful to my Heavenly Father for this knowledge, and for the Restoration of the Gospel and for all that, this entails. I know Joseph Smith was a prophet of the Lord. I know that he translated The Book of Mormon by the Power of God, and that it contains the true Gospel of Jesus Christ. I know that the keys and authority that were given to Joseph Smith so many years ago, are still on the earth today, in our modern, living prophet, Thomas S. Monson. I know these things are true. I also know that if we follow the prophet, even if we don’t fully understand why, we will have spiritual peace and lasting happiness.

I recommend re-reading Doctrine & Covenants 135 in its entirety this week, and reflecting on the life and work of the Prophet Joseph Smith.

12 thoughts on “My Testimony of Joseph Smith”