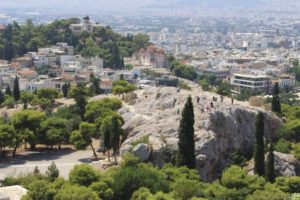 This week in Come Follow Me we get to read Acts 17.  This chapter starts out with Paul and Silas making their way through Macedonia and Thrace, spreading the gospel and teaching the Saints.  After Paul escapes the angry mob in Thessaloniki, he ends up in Athens, a city, “wholly given over to idolatry”.  He goes to the Aeropagus, or Mars Hill, which is a place where people congregate to gossip and debate. While there he preaches the gospel.

Here are some of the highlights from my notes:

In verse 19-20 The Epicureans and Stoics ask Paul, “May we know what this new doctrine, whereof thou speakest, is? For thou bringest certain strange things to our ears: we would know therefore what these things mean.”  Paul teaches them.  Here are the things I was most impressed by from Paul’s sermon:

What was the reaction of the Athenians?  Some mocked, and some believed.  Paul experienced a similar condition on Mars Hill that we do today when we try to share the gospel. We are in a world that is so religiously checked out, and/or focused on the wrong things.  I have really come to appreciate that the ancient saints faced many of the same trials as the modern saints, and I am trying to glean as much from them as I can.  The worldly winds of change blow hard, hot, and quick. People of faith are pressured to accept the world and mocked or persecuted if we don’t fall in line.  Who has been called a racist, a bigot, unloving, unkind for accepting the Lord’s standards?  We will be swallowed up by the world if we are not careful  So when we encounter people and endeavor to teach them, share with them, or defend our beliefs,  we must teach them who God is first.  Remembering we are children of God solves most of the problems we face. Forgetting this also leads us down bad paths.  We also must be bold and unafraid like Paul as well, and unafraid to stand up, and speak out for what we know is right and true.

3 thoughts on “Standing with Paul on Mars Hill”