This is part three of our experiences being evacuated from our home due to the Las Conchas fire. Read part one HERE and part two HERE 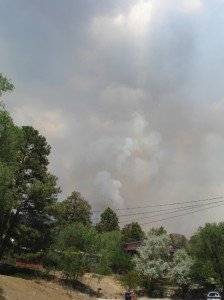 The things we did well:

As I mentioned in my first post, because of the Cerro Grande Fire in 2000, our ward is very focused on preparedness. We have listened to our friends who were in that situation and took their advice to heart. One thing that my friend Connie, whose home was lost in 2000, has repeated time and time again is, “If you are spiritually prepared, you will be able to get thru the temporal trials.” I felt that we were spiritually prepared and put our faith in the Lord. Our faith and the faith and prayers of others carried us thru the week we were on the run.

We’d also talked about evacuating many times as a family. We knew where our important documents were. In fact, we call that our “Grab-and-Go-Kit”. We had our photo albums and other unrecoverables in a few specific places in the house, so they were easy to collect and pack. Our computer was easy to dismantle and take with us as well. Our suit cases and personal items were also in easy to find places. I was also able to grab all of our medicines, including my son’s epi-pens because they were organized.

We had taken pictures of our home and possessions and had met with our insurance agent a few years ago to talk about our homeowner’s policy. We knew how much would be covered if we’d lost our home and what the insurance would pay to recover. Thankfully we had ample warning that we were going to evacuated, so we had time to take an updated set of photos. However, this might not always be the case. We’re making it a point to take new photos once a year and putting copies of those photos in our safe deposit box and grab-and-go box. We’re also going to meet with our insurance agent again soon to review our policy and make changes. And by way of advice, if you do not own your home, you can and should purchase renters insurance. I met a lady along the way who did not have this, she was shocked when she found out she would have to replace all of her own belongings if their home had burned. Many insurance companies bundle home/renters with auto insurance. It’s worth investigating.

During the hours that we were collecting and packing, my husband thought to hand me an LED flash light. He also had a head band flash light that he strapped on his head and used. This head band allowed him to move quickly and with ease. It also served as a great night light for our son who was afraid of the dark and unfamiliar surroundings. LED flashlights are really good as well, they last forever and are much better than the old standard flashlight you had as a kid. They’re fairly inexpensive; it might be a good idea for each family member to have their own in an emergency.

We’d also talked as family about actually leaving in an evacuation and where we’d meet up if we were ever separated. We did just that, at the gas station at the bottom of the hill. Once we were out of town, safely, we were able to stop and talk about our next move. We knew where we could go and find a hotel. One regret is that I did not call ahead to make a reservation. If you have time, do that. My other regret was that the hotel we stayed in for two days did not really fit our needs. If I had to do it again, I’d like a room with a refrigerator and/or a microwave. That would have saved us going out to eat and would have given us a place to keep milk cold for our son. As part of your emergency plan, find out what hotels in your area offer, and keep a list in your grab-and-go-kit.

I also mentioned that my husband had been prompted to fill our gas tanks up the day before the fire even started. This saved us time. We would have been ok, had we not filled up the day before, but again, you never know the situation that will be present if you are forced to evacuate. Don’t get caught unprepared! If you live in an area that is prone to disaster or frequent evacuations (Florida and hurricanes come to mind), be ready to go, have your gas tank full, so that if you are caught in traffic you won’t be stranded.

We called our home and visiting teaching families before we left and found out where they were going. We also told them where we were going. Our ward is very tech savy and connected thru social media and email. Thankfully we had internet access all the places we ended up staying. That might not always be the case though, and cell phone lines could be down – know how to get in contact with people the old fashioned way. I’ll repeat again, if you do not know your home and/or visiting teaching families, change that today. They should feel comfortable calling you in any sort of crisis. Get rid of your excuses, and just do it.

A few months ago, I also created a profile on our ward website thru LDS.org. Not everyone in the ward had done that however. Like I mentioned, the ward list was useless, and had everyone had an updated profile on LDS.org it would have been even better. Another bonus to having an updated profile is that your ward and stake leaders can email ward members thru LDS.org. It was nice to get updates from the Stake President and our Bishop.

The things we could have done better:

Oh that darned 72-hour kit! I always had good intentions of getting those made, I always have. But my excuses have always gotten in the way. I have to admit, it’s a bit daunting as well, and that is perhaps my biggest excuse. However, I need to just do it. We evacuated to Santa Fe, where there were stores and places to shop. But what if we had evacuated to a shelter? It would have been nice to have some food on hand. We were able to grab some food items on the way out, but as I shopped the first day of the evacuation, I bought things I knew I had already in my cupboards at home. I felt a bit stupid having to repurchase things.

Money. We had no cash on hand when we left our home on Sunday night. We also had a pretty low balance in our household bank account as well. Thankfully we evacuated near by a branch of our bank. But I kept wishing I’d had some cash in hand till we got to our bank the next morning though. Keep cash in small bills (think 1’s and 5’s) in your grab-and-go or 72 hour kits. If power goes out, or you are in strange place your ATM card might not work.

One of the most daunting tasks, at least for me, was deciding what to take with us. I felt overwhelmed with any choice beyond, “take the photo albums”. We ended up taking all of our DVDs with us. I know, random, and perhaps not the best thought out decision. If I had to do this again, I’d take more pictures from the walls, or perhaps some books with sentimental value. Decide ahead of time, what you really want with you. Once a mandatory evacuation has been issued, you cannot go back for the things you forgot.

I mentioned that I have a 2 year old son. This evacuation was pretty traumatic for him. He knew something was going on and that things were not “right”. He stood wailing the in the middle of the family room as we packed to leave. I wish I could have comforted him more or made things more “normal” for him. He was too young to understand that everything was going to be alright. I know when he is older he will understand more. If you have kids that are old enough to understand serious situations make sure you include them in your emergency plans. Make sure they know how to act and are able to participate in an emergency. I think it’s also important to create as much consistency as possible. Try and stick with your schedules, take toys or objects that are familiar to your kids, don’t be surprised if their behavior and habits are “off”, but try and maintain normalcy as much as possible.

I said at the beginning of this post that if you’re prepared you can get thru most situations. Obviously you cannot plan for everything. You never know what the emergency will be or where you will end up. But if you’re prepared things will be less stressful and you will be better able to come out of things. I encourage all of you that read this, to take some time in the next few months to review your emergency plans as a family. Practice packing up to evacuate, take pictures of your home, review your insurance, have copies of your irreplaceable documents, make those 72 hour kits and be ready for any crazy situation that may present itself.

2 thoughts on “Lessons from the Fire”