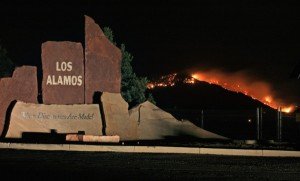 We were now 24 hours on the run, hold up in a hotel in Santa Fe, with all of our belongings. It’s humbling and frightening to see all that you might own stuffed into 4 rubbermaid bins, a few suit cases and every duffel bag you own.

I got dressed and forced myself to go down to the breakfast service the hotel offered. I had no makeup on and my hair was not combed. I looked and felt disheveled. Then there was a ray of hope. A family in our ward had also ended up at this hotel. We sat and ate breakfast with them. As we talked, other people in the room joined in. We all were from Los Alamos. One of the ladies at the next table lived one street up from us even! A neighbor! We were surrounded by people in our same situation, who knew what we were feeling and going thru. There is strength in numbers and comfort in our trials.

But we still were homeless and sacred. I had yanked the ward list off the wall on my way out the night before. I thought just in case we need to get in touch with someone. But those numbers didn’t matter anymore. No one was home. Would any of us ever be home again? I felt so ripped from the security of our ward, of the people we knew, of the familiar saints. As hard as I tired though, I could not stop feeling sorry for myself.

Then I checked my email. Sixty-four messages were waiting. Sixty-four?

There were emails from ward members telling everyone where they were and what their cell phone numbers were. Slowly my ward list was becoming useful again. And then there was an email from our Relief Society President with an update from our Bishop. Everyone in the ward, with few exceptions (less than 10 families), was accounted for. The reason for this was because home and visiting teachers had done their jobs. They’d called their families and checked on them, picked up the members with out cars, and stopped by ward members homes, who were not home to gather their valuables. It’s great to know that in a pinch the programs worked. I wished, however, it hadn’t been a crisis of this magnitude to really bring us all together in this way.

I could care less for fancy pintables, or cutesy doo-dads, from my visiting teachers. I just want to know that they are there for me in a crisis. And they were. Throughout the week, they called us every other day. It was extremely comforting. My challenge to you, the reader, is to evaluate where you are in the relationships you have with your home and/or visiting teaching families? Do you know them? Do they know you? Do they trust you? Would they call on you if they needed help? If not, make the changes necessary so that they can call on you, and will call on you.

As we went throughout the week, I noticed the goodness in people as well. As Latter-day saints we have it drummed into our heads at a young age to go and serve others. I think we fail to teach ourselves how to be the recipients of service, however. We were in need of service, and it was hard to accept the hands and hearts outstretched to us. It’s very humbling to receive the service of others. I prayed that the Lord would bless everyone that helped us, offered us their prayers and kind words and concern; and we were richly blessed.

Before we’d even left our house on Sunday, a mission companion, who lived in Albuquerque, called us and offered their empty home and everything in their fridge if we needed. Some cousins, who we did not even know were in New Mexico, who lived in a town just on the other side of Albuquerque, also called and also offered us a place to stay as long as we needed it. We took both of them up on their offers. Although it was stressful to be in someone else’s home as a stranger-guest, it was a relief not to have to worry about cooking meals, or even where the meals were coming from. It was nice not to have to worry about doing dishes or shopping for the things we needed. It was nice to know that my son had friends and animals to play with and to find comfort in. It was also nice to not have to worry about television for a few days. Other friends in town also invited us to dinner and to play with their kids. We had people taking care of us. People all around us were helping us carry our burden and were coming to our aid.

As the week trouped on, I felt my fear drip away. I felt like I could have faith that we’d be able to go home. The fire was still holding at the edge of town. The Fire Chief assured us all that they were going to save the town. I felt trust flow from him as he spoke. He had been the Fire Chief during the Cerro Grande Fire of 2000, so he knew how bad things could have been.

Sunday, July 3. It was 5:30am and I was wide awake. As hard as I could I could not fall back asleep, so I got up to try and catch some news. The news was the same, fire holding at the edge of town, a black line had been bulldozed around town, 1000 people on the lines fighting, National Guard and Police protecting neighborhoods from looters. After 45 minutes I turned it off. Another 45 minutes later we received a call saying that town was open. They were letting us come back home! I felt the weight of my trials lift off of my chest. We could go home! We had a home to go to! No structures were lost! All was well!

We decided to go to sacrament meeting before my husband would head home and check out the lay of the land and the air quality. We both needed to take the sacrament and to just feel the spirit. The brother who said the opening prayer prayed for our stake and our town and for the members of our ward specifically. It was hard holding in my tears. I also wanted to bear my testimony. As I got up to speak I noticed a family from our ward on the second row of the chapel. It was good to see familiar faces, in strange places!

After celebrating 4th of July with strangers, we did make it home. Our house was intact, if not smelling like a bad campfire, we were home. My son knew it right away and gravitated to his toy corner happy to see his things. The rest of the house looked like burglars had been there, and the kitchen floor was covered in a mysterious sticky substance, but none of it mattered. Our home was safe, as were the homes of our friends and neighbors. The fire had burned to the edge of town and split in half,going around Los Alamos. It was the miracle we’d, and I’m sure many other people, had asked for. In the following days, we stayed shut in our homes trying to escape the smoke and ash, which was a trial I was not ready for, but have managed to slog thru anyway.

There are many other lessons we learned thru this experience, and I’ll share some of those things in my next post.

5 thoughts on “Running from the Fire: Serving and Being Served”