A preface: In 2000 the Cerro Grande fire burned over 48,00 acres and over 400 homes in the town of Los Alamos, New Mexico. Many families in the Los Alamos Ward were among those whose homes were lost or damaged. As a result of this fire, the Los Alamos Ward has been in a “preparedness” mindset for the last 11 years. 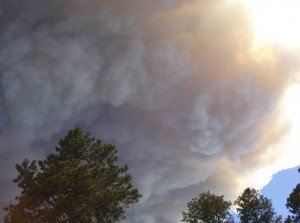 June 26, 2011. My husband stepped out on to the back patio to check something in the yard. He looked up and noticed a wall of smoke billowing in the sky over hour home. It wasn’t a rain cloud, it was a pyro-cloud. The sun was also blood-red, a sure sign that something was not right. We turned on our computer and did some checking. A forest fire had started about an hour and a half earlier on a ranch about 15 miles south and west of our home. Because we have been in the most severe drought in New Mexico’s recorded history we decided to get a few things ready just in case we had to evacuate. We’d sat in enough fifth-Sunday lessons on preparedness and had listened to the stories our fellow ward members told about the Cerro Grande fire to know that forest fires were nothing to joke about.

Within 3 hours a voluntary evacuation had been issued for our town, and the fire had been given a name, Las Conchas. The fire had burned over 3500 acres in just a few hours, it was coming fast! We gathered with our neighbors in the street and discussed what each family was going to do. We were supposed to be planning our 4th of July block party, that would have to wait for another day though. With phone numbers exchanged and best wishes given, we all retreated into our homes to continue our preparations to leave.

The news played in the back ground as I rushed around my house gathering photo albums, snacks, our clothes, my wedding dress, a box of mission things and anything else I could think to take. My husband kept coming back in telling me there was more room, and to find stuff to bring with us. What though? What do you take? How do you decide what stays and what goes? We’d gone over this before in our minds and had talked about it before. We knew where everything was, but that did not lessen this burden. I thought to myself, “When this is over, you need to make a list.”

My poor son, who is only 2 years old, knew something was happening as well. I could not stop to comfort him however, we had to keep packing. Finally at 10pm, we knelt down and said a prayer as a family. Would this be the last prayer we had in our home? We asked the Lord to protect our town, our home, the homes of our neighbors and friends. We asked that we’d have safe travels and that we would be able to find a place to stay that night. We asked for a miracle. I felt the spirit very strongly as we said that prayer. That comfort was very needed and wanted.

There were long lines at all of the gas stations in town. We passed them. Thankfully, my husband had followed the prompting he’d had the day before to fill our cars up. It was one less thing to worry about in our escape. We drove down our hill, THE HILL, as Los Alamos is called by its residents, and met at a gas station at the bottom of the hill. We looked back up and saw the flames creeping toward our town. We made a plan as to where to try and stop for the night and started driving again. As I looked back over my shoulder, I saw those flames again, burning very brightly in the night sky. These were mean, angry flames, feeding on dry brush and tall ponderosa pines. I thought to myself, “Heavenly Father, I am very scared, and I don’t know what to do.” The answer to my frightened half-prayer came very quickly. “Trust in your covenants and all will be well.”

We pulled into Santa Fe and were able to get one of the last hotel rooms in the area. At least we had a place to lay our heads. At least I could stop and comfort my son. We called our parents and told them where we were, and asked them to call our siblings and extended families and ask for their prayers in our behalf. Prayers work. I’ve never really understood what it meant when people would say, “I feel the prayers of others”. I do now. It’s not something I could ever describe, but I know it’s a real feeling and thing. We had hundreds of people praying for us, and that was comforting. I was counting on those prayers to save us, all of us.

Monday morning came. We’d left with no cash on hand, so a trip to the bank was in order. I’d like to interject here, have some cash on hand, in your home, it’s one less thing to worry about if you ever have to leave in a hurry, and you never know if you will end up in a place that has a bank or a cash machine. By the time lunch rolled around, we’d found out that Los Alamos was still under a voluntary evacuation order. We decided to go back for a few more things. My wedding ring specifically. The smoke was stifling. There was no escaping its choking effects. Even if we had not been asked to evacuate, we could not have stayed there. We were only home for about 20 minutes when our neighbor came and knocked. “The evacuation is now mandatory. Our neighborhood has been given an hour to leave.” We finished gathering the last few things we could think of, and relived the last night. As we left, we noticed that the roads were now one way…OUT. There were National Guard and police stationed along the route. Really, would we see our home again?

It had been 24 hours since we’d been asked to evacuate. The fire had burned over 45,000 acres, and would burn much more. That night as we tucked ourselves into a hotel room bed we saw photos on the news of the fires above the town. The flames were literally licking our backdoors. It was hard to watch, but at the same time, hard not to watch. I just wanted every bit of information I could get. The fire fighters were making a stand at the edge of Los Alamos Canyon. If they could hold the fire to that canyon, they could save the town, if not, the town would be lost…again.

11 thoughts on “Running from the Fire: Our Escape”