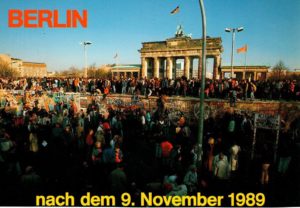 As I wrote ten years ago, I served a full time mission behind the Iron Curtain in Bulgaria.  When I was there, the dreary grey of communism still stuck on all of the buildings.  People struggled to meet their most basic needs of feeding and clothing their family.  Sometimes basic food items like bread and meat were scarce. Inflation was rampant, sometimes the exchange rate even changed several times a day.  You didn’t change your American Dollars until the minute you needed to buy something it was so out of control.  With the rise of socialism’s popularity in this country, I find myself saying to anyone who promotes socialism to talk to me after they’ve waited in a bread line or 14 — believe me, it’s not as fun as you might think.

Today is an important day for me and for many around the world. November 9, 2019, marks 30 years since the Berlin Wall came down. I keep a piece of the Berlin Wall in my office to remind me of this great miracle. I never thought it would happen in my lifetime!

It took about 11 months after the wall came down for East Germany and West Germany to agree on unity. So every year on October 3, Germany officially celebrates “Unity Day.” After many years of separation and suffering, Germany was finally united.

In the month that has passed since Unity Day, I have pondered about unity. I remember back to 1989 when people from each side of the wall began to meet each other. We had similar dreams, aspirations, and hopes for our lives. Of course we had our differences too, but our intrinsic values and goals were similar. We found ways to focus on the similarities we had rather than the differences. Over time, the miracle of unity happened for Germany.

There is a great need for unity in our human relationships too. Perhaps we have figurative “walls” in our families, our friendships, our lives. When our walls come down we might think, “How is it possible to feel unity when we are so different?”

Well, I would suggest that we reapply the gospel principles and the teachings of the Savior. The Savior is the one who can help us bring our walls down. We try to be more forgiving, more kind, more understanding, more supportive of each other. If we make mistakes (and we will), we have the gift of repentance to fix our personal relationships and our relationship with God. Remember, because of the Savior’s sacrifice we can experience the miracle of unity in all the relationships we have in our lives.

Unity is something we lack in the United States today.  I find myself even in a state of shock and mourning when I go to church many weeks as, even there we’re not unified in our belief and commitment to the gospel.  (Sidebar: follow the prophet, read the scriptures.  Love, support, and sustain the doctrines of the church, and the leadership of the church.  Doing that will cure what ails your spirit). We need to come together as saints and people.

This week as I have been trying to catch up on my Come Follow Me readings, I was in Thessalonians.  In his letters, Paul thanked the saints of Thessaloniki for their dedication to the gospel and for their understanding and practice of ministering.  He thanked them for their “abounding love for each other” and for the other branches of the church.  I got the feeling that they really were clinging to each other as a congregation to support each other in their righteous endeavors. They got ministering!  They were unified.  They had to be though. The ancient world was a crazy wicked place, with idolatry, fertility cults, child sacrifice, rampant immorality, people trying to deceive the saints and lead them away, and people practicing priestcraft and other deviations.  The 21st Century is not much different from the 1st.  We have all of the same temptations, sins, troubles, and people to deal with, we just have electricity and google to help or hinder us a bit more.   I’ve been pondering ways in which I might follow the example of the Thessalonian better.  Elder Uchtdorf’s message today, echos Paul’s message of millennia ago. 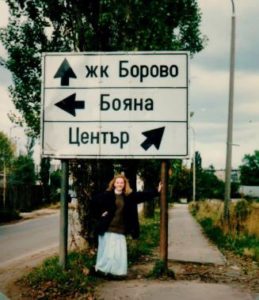 It’s been a busy ten years in the world and in the church since I wrote that first post.  Twenty-five years ago when I was a Bulgarian missionary, the Saints made their first group excursion to the Frieberg Germany temple.  They had to travel 3 days on a bus and had to cross through Serbia, which at the time was still Yugoslavia, Hungary, Slovakia, Czechia, and finally Germany.  This was in the days before the EU had expanded into Eastern Europe, so crossing each country’s border meant stopping for considerable time.  Now most of the Bulgarians can fly to whatever temple in Europe they feel like going to.  There is now a temple in Kiev, Ukraine, and temples announced in Hungary, and Russia.  The Frieberg temple was expanded a few years ago as well, to accommodate more patrons, and the Frankfurt temple has just been rededicated by Elder Ucthdorf this last month.  The gospel is going forth, the church is growing, the work of the Lord is not stopping.

Last year the Bulgaria Sofia Mission was realigned to become the Bulgaria-Central-Eurasian mission.  The mission headquarters are in Sofia, and now the mission includes Turkey,  Azerbaijan, Kazakhstan, and Uzbekistan.  Missionaries are not on the ground outside of Bulgaria, but this is the jumping off point for work in the future.  It’s exciting to think where the world and the church will be in ten more years when we celebrate the 40th anniversary of the fall of the Berlin Wall.  I invite you to keep praying for your families, for each other, that our love may abound like the love the Thessalonians had for each other, and that some day soon we can see freedom and the gospel spread to even more nations, kindreds, tongues, and people.

3 thoughts on “Fall of the Berlin Wall 30 Years Later”