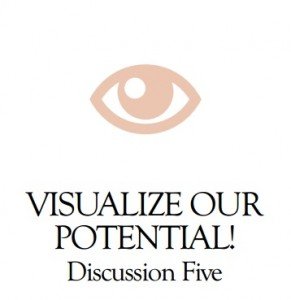 Given all the furor over the pending disciplinary council being held to discuss Kate Kelly’s future standing with respect to the LDS Church, I was intrigued to again see the promised discussion regarding “Visualize Our Potential!” be delayed.

An Emotional Appeal: The Soft Challenge

The cover of this discussion is an adorable picture of a light-haired, white/hispanic girl gazing up into heaven, her chin poised pensively on clasped hands. The first blurb tells the story of a three-year-old girl playing at preparing and passing the “sac-a-ment” after seeing a woman in another denomination officiating.

An activity follows, showing staged images where women appear to be blessing others. One is a baby blessing where only one man appears to be standing in the circle. The other is a woman with female hands on her head. How, we are asked, would the optics of the Church be different if women were ordained?

No mention is made here of the scholarly consensus that female ordination is correlated with declining membership. As one female PhD concluded, “none of the groups that have dramatically increased in influence between 1960-2005, including the Roman Catholic Church, the Southern Baptist Convention, and the Church of Jesus Christ of Latter-Day Saints, have opted to ordain women… both groups who have opted to ordain women during this time frame have shown a noticeable drop in membership.” 1 For an older but more official-looking publication, see Leon Podles’ The Church Impotent: The Feminization of Christianity. 2

We are then treated to a page of soundbites from LDS Church leaders, where we are encouraged to imagine our eternal potential, hope that the Lord will fulfill His promise to us, prepare [to]…become more like our God. One presumes these soundbites have been selected to provide reassurance that male leaders do approve of female ordination.

This is followed by another activity, were we are supposed to draw a river on which images of the moments when female ordination seemed desirable and even compelling would be drawn. The prior activities were appealing, but this is the activity where a woman who has felt unsatisfied commits herself. It is personal now.

Another activity is conducted, where participants are asked to envision hearing Official Declaration 3 (hypothetically granting women the priesthood) read from the pulpit. Alternately, we are asked to imagine a Conference Address where Thomas S. Monson declares that women have been granted the priesthood. These fictional constructs are well-crafted, they feel authentic. Surely, the participants might think, this is the only appropriate outcome. Insignificant bishops may call councils, but these women have experienced the revelation as though it has already happened. Female ordination is obviously inevitable, they now feel. The painful experiences they drew in the river activity will be subsumed in a bright future where women are positioned throughout the Church, a future where the optics are fully aligned with the staged photos at the beginning of the discussion.

After all these activities, intended to build to a crescendo of desire for female ordination and even complete confidence that this is the only reasonable outcome, we are given three articles to read talking about women who are ordained ministers: the Rev. Elizabeth Eaton assuming the office of presiding bishop of the Evangelical Lutheran church in America (ELCA) in November 2013, the Right Reverend Mary Glasspool of the Episcopal Church talking about her role as assistant bishop of the Diocese of Los Angeles since 2010, and the 50th anniversary of the 1956 general conference of the Methodist church approving full clergy rights for women.

Again, none of these articles speak to the precipitous decline in membership in these denominations.

A column of scripture passages concludes this discussion, with eschatological promises of a joyous end despite sorrow and hardship in the now.

Those participating in the discussion rejoice in the certainty that they are doing God’s will. Any sacrifice is warranted, to bring to pass the female empowerment visualized in this discussion.

This past Sunday it is likely any Mormon who attended Sacrament Meeting heard the final stanzas of Eliza Snow’s most famous song, Oh My Father:

I had learned to call thee Father,
Thru thy Spirit from on high,
But, until the key of knowledge
Was restored, I knew not why.
In the heav’ns are parents single?
No, the thought makes reason stare!
Truth is reason; truth eternal
Tells me I’ve a mother there.

When I leave this frail existence,
When I lay this mortal by,
Father, Mother, may I meet you
In your royal courts on high?
Then, at length, when I’ve completed
All you sent me forth to do,
With your mutual approbation
Let me come and dwell with you.

Besides teaching us of a Mother in Heaven, Eliza was the one who wrote up the first proposed constitution for the female organization that eventually became Relief Society. She founded the youth ministry, including a young women’s ministry. She organized the children’s ministry. She was presiding over the Relief Society when Utah woman were granted the vote in 1870.

Eliza presided with power, performing blessings on all as requested and required.

And yet I somehow doubt Eliza would appreciate the way these discussions create a fictive environment that eliminates the possibility of a divine “No.”

I am a woman of God, able to minister with power to those I have been called to serve. I am a mother of children, able to nurture them to become great in their own way. I am a wife, able to cherish the soul of my husband. I am a sister, able to gather my age-peers in my heart. I am a friend and a mentor and a teacher. I preside when my duties so require. I lead when so assigned. And I follow those with stewardship over me.

I’ve laid blessing hands on my son’s head when he was ill. I’ve keened when my only hope to hold him was relegated to the resurrection. I’ve played thumb war with my autistic daughter. I’ve listened with aching sadness as she declared her aspiration to be a wife and mother. I’ve sung to my eldest of hickies after finding her neck festooned with evidence of an enjoyable date.

I am able to comfort those whose heads are bowed. I am able to greet all I encounter with an honest love derived from a faith in a shared eternity in which I loved them as myself.

If at some point I am asked to bear priesthood keys by those in authority to grant such to me, I will do so. But I will not allow the lust for such keys to canker my soul against the God I love and the Church He has given me.