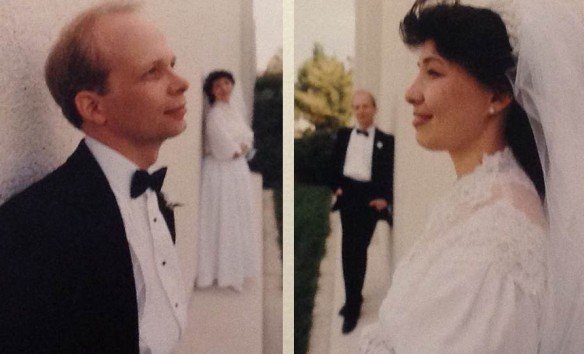 My husband, Bryan, shared with me a comment he posted on Kyleigh Ruth’s post titled Ordain Women: thanks for nothing. Which prompted a spirited discussion. Below is my attempt to capture the discussion in less than 2000 words. The 40 minute podcast in the link above represents us talking to one another live, informed by the text below and our original conversation.

Meg: Bryan, would you like to start off responding to some of the issues the Ordain Women movement has brought to the surface?

Bryan: Sure, honey. First, women and the priesthood: What I want is more knowledge on this issue from the Lord. I can see 3 main answers to “Should we ordain women to the priesthood?”: a) No, the way it is now is the way it’s supposed to be ; b) Yes, ordain them to the priesthood as now constituted; c) Yes, but ordain them in a parallel and somewhat different structure. Hopefully there would be more explanation with any answer.

Meg: I think Elder Oak’s talk this past conference made it clear that ordaining women to the priesthood, per se, is not in the cards. However he definitely clarified that women are called and set apart under the authority of the priesthood as they minister. We now use the term set apart, but Joseph originally used the term “ordain” when he blessed Emma Smith in 1830, in D&C 25. So I think it is absolutely possible that we can see women “ordained” or set apart to serve in ways currently performed only by men.

Bryan: That leads into the next concern I see implied by the desire to ordain women to the priesthood, which is making it possible for women to have a greater presence in decision-making councils. I agree with them here. I like how one of my former bishops would include the Relief Society president in weekly Priesthood Executive Committee meetings, not just the monthly Ward Council meetings.

Meg: Elder Ballard has tried to encourage those leading congregations to listen to the women in councils rather than simply tell them what to do. But structurally the emphasis has been on allowing women time to tend to the family concerns so many of them have, rather than demanding they sit in lots of meetings.

Bryan: However I do see the benefit of having women present in ministry to those struggling with personal issues. I see a lot of merit in this.

Meg: I agree. The concern I have here regards the logistics of allowing women to be present. Would you always have a woman present whenever another woman met with the bishop? Would this perhaps be something where a woman would simply confess that she has serious concerns and ask to be assigned a woman to work with her on full confession of these issues? I think there is a way through this, but it isn’t a trivial matter. For example, if a bishop is interviewing a woman, and then opens the door to invite the designated trusted female into the interview, that’s tantamount to screaming “sexual indiscretion about to be discussed!” Besides, it would suck to be the “trusted female” who would have to be on call for the eventuality of a sensitive matter. But it seems some mechanism could be established that serves the needs of all.

Bryan: Yes, the details of how we minister to one another are open to modification. But the Ordain Women movement has made clear their desire that women be allowed organizational autonomy: This can never be fully achieved in any hierarchical organization. There will always be a need for supervision and occasional overruling by the higher-ups. And with it comes the potential for various types of managerial stupidity. This is not a gender issue per se, but one of teaching better leadership and management.

Meg: While this isn’t a gender issue, per se, I’ve seen in my career working in support of the submarine force what happens when women are never allowed to participate in certain activities. The Navy is opening submarine service to women now, but when I was young, I had to prove myself over and over again, because it was clear that, as a woman, I could not have served on a submarine. When I briefly worked at a job where both men and women served together on the military platforms, I was still subject to the rule of my superiors, but I no longer had to prove myself every time I opened by mouth. While I agree the stated desire for autonomy is inappropriate in a hierarchical organization, there also has to be a way to explicitly respect one another as equals.

Bryan: This brings us to the matter of definitions. I think much of this discussion goes astray because people are using different meanings of “equal.” It’s like the way people debating “Are Mormons Christian?” often talk past each other because they are arguing about different meanings of “Christian”. There is no single true meaning of the term, but several valid ones, and it would help to acknowledge which meaning is being used so at least we can agree where we disagree.

Meg: We are equally children of God whether male or female. We who are baptized equally take upon ourselves the name of Christ and the mission to serve Him. But it is patently obvious that men and women aren’t equal in the sense of biological sameness.

Bryan: Yes. There are real differences between the sexes, and it is wrong both to exaggerate them and to minimize them. Despite the fact that I’m the parent that stays home, I will never be the one who gives birth to our children, for example. Aside from reproduction, there are other attributes where men and women differ. What complicates things is that for many human attributes, men and women are not completely distinct but clustered into overlapping bell curves.

Bryan: Some contend that equality requires uniformity. There are gender-based roles in the church that really don’t need distinction, but I think it would be wrong to try to make the church gender-blind in all its operations. For example, one thing I like about the meeting block format is that it has both a time where men and women meet and discuss together (Sunday School), and a time when they meet and discuss separately (Relief Society / Priesthood quorums), allowing them to relate in their own different ways.

Meg: I find it interesting that men and women now study the same lesson during their respective Relief Society and Priesthood meetings. I’m always interested to hear how those lessons were handled in your classes, for example.

Bryan: I do like it when we can discuss the lessons. But of course recently you’ve often been elsewhere, ministering to our daughter.

Meg: I always have an opinion, though, even if I wasn’t in the corresponding lesson.

Bryan: I treasure those discussions. One thing that distresses me about the Ordain Women conversations is the level of discourse. It pains me to see people condemning those they disagree with, whatever side they’re on. It gratifies me to see those who disagree reaching out, apologizing, empathizing, and trying to understand.
The democratic ideal of debate, discussion and reaching agreement is a very high standard that is hard to achieve. The human tendency is to force one’s opinions on others. Earlier in US history public discourse often relied on slanderous mischaracterizations and yellow journalism (worse than what we see today). Nowadays people often skip persuasive discussion and go straight to lobbying, boycotting and intimidation.

Meg: I had an “Aha!” moment when I realized Kate Kelly is an attorney. Her fundamental worldview from her professional experience leads her to see the value of antagonistic confrontation. So while I don’t agree with the methods she has used, at least I understand why she felt those methods were appropriate.

Bryan: As a means to an end, public politicking is poor way to bring about change in the LDS church. On the ecclesiastical level it ignores the doctrines of revelation, avoidance of disputation, and reaching accord through persuasion. On the practical level it leads to resistance in the leadership and resentment in the members, which is counter-productive to the desired goals. A major problem is that there is no institutional means in the church for members to bring concerns to the leadership. In my opinion, even more than the question of ordaining women, I would like the Church President and apostles to plead with the Lord to know how to set up a system for members to share grievances and concerns with their leaders, so they don’t feel the need to follow the model of the world.

Meg: Do you have a suggestion of how members might be able to share grievances and concerns?

Meg: I know the Church hasn’t been receptive in the past when external organizations attempted to steady the ark. For example, Lavina Fielding Anderson and others formed the non-profit “Mormon Alliance” in 1992, with the intent of investigating ecclesiastical abuse. It appears those involved in the Mormon Alliance intended their work to address grievances and concerns. But fundamentally the Mormon Alliance, as an external entity, put themselves in the role of independent prosecutor. I remember when you asked me to read the issue of Dialogue containing many of those writings. I was disturbed. I thought maybe I was going to have to stop dating you.

Bryan: And then I told you I wanted to have you read it to see if it bothered you as much as it bothered me.

Meg: I was so mad! Here I’d been so upset, and all you’d had to do was indicate the articles had bothered you when you handed me the issue to read.

Meg: Love you. Anyway, another model for identifying problems and responding was developed by Stephen Covey, towards the end of his life. His book, The Eighth Habit, and the idea of an execution Quotient (xQ), were focused on businesses. But as Stephen Covey was coming from a Mormon worldview, I think it is interesting to consider how his Eighth Habit and xQ concept could be adapted to improving the Church’s ability to minister to the world, minister to the members, and provide a mechanism for greater involvement of women in guiding the Church’s work.
I’d really like to continue this conversation. Would that be good with you?

Bryan: Sure! I’m sure something will come up we’ll want to discuss.

14 thoughts on “Ordain Women: A Husband and Wife Respond”