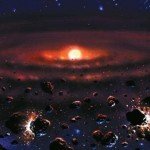 I want to first warn that none of what I am about to explain is official doctrine of The Church of Jesus Christ of Latter-day Saints or any other member. These are my own ideas and speculations only, no matter if shared by others. Long and ponderous thinking and praying has produced a personal belief that can always be amended with more revealed truth and knowledge. With that said, lets move forward by going back.

Years ago I had my doubts about how it all started. My mind was already made up that Evolution was true and the Fall could be reconciled. What I had difficulty understanding was what is known as “The Big Bang” that seemed very close to orthodox Christian ex nihilo and First Cause teachings, although it doesn’t really support them. First Cause has not been about the creation where the theory postulates a singular event, but about the Creator. Just as problematic is that ex nihilo is “out of nothing” where the theory can only work if there exists something. In fact, a lot of something has to exist that is packed into an extremely heavy glob of energy and mass. My problem was the Mormon teachings of the eternal nature of matter and the cyclic nature of creation. There seemed to be a starting point without any explanation where it all originated.

With some help from others I decided there wasn’t such a big problem after all. Some theories state that there is a slow rubber band effect where the Universe contracts just as it had expanded. Perhaps I was not looking far enough back. It might be too much for my feeble mind to comprehend, but there could have been several big bangs and contractions that continues the cycle of existence. Eternity is a very long time and God has lots of it.

Then there was light, or at least a cosmic explosion of energy and material. After billions of years we read in Abraham 3:24, “And there stood one among them that was like unto God, and he said unto those who were with him: We will go down, for there is space there, and we will take of these materials, and we will make an earth whereon these may dwell.” Since there were already earths that came and went, this statement might not be specific to our own lonely planet. It has been personalized for our edification.

The books of Genesis, Moses, and Abraham follow much the same pattern of events. For brevity sake, I will use Genesis with the others supplemental. As explained above, the big bang was the separation of the light (energy) from the dark (matter) with the formation for the human’s sake the stars and planets (Genesis 1: 3-5), including the Sun. Skipping ahead a bit, the Moon complimented these (Genesis 1:16, 18) for time keeping and light source. According to Doctrine and Covenants 88:45-47 the expanse of the Universe is much more than a clock:

45 The earth rolls upon her wings, and the sun giveth his light by day, and the moon giveth her light by night, and the stars also give their light, as they roll upon their wings in their glory, in the midst of the power of God.

46 Unto what shall I liken these kingdoms, that ye may understand?

47 Behold, all these are kingdoms, and any man who hath seen any or the least of these hath seen God moving in his majesty and power.

Going back to the quote of Joseph Smith, “This earth was organized or formed out of other planets which were broke up and remodeled and made into the one on which we live,” there is a hint of how science theorizes the Earth’s construction. An estimated 4.5 billion years ago gaseous material coalesced after the collapse of a giant molecular cloud. Most of the mass developed the Sun, while a flattened portion circled and eventually formed planets, moons, asteroids, and other objects. Protoplanets collided, broke up, reformed, and generally caused mayhem until forces generally stabilized the Solar System. The earth was hit by a very large body that formed the moon and tilted the planet.

Water plays a very prominent role in how the Earth and its inhabitants were formed. There was a dividing of the waters from the waters (Genesis 1:6-7) both above and below to form an expanse. Modern theories about the formation of our atmosphere talks about what happened with water in much the same way. The Earth was either covered by thick clouds or water vapor spewed out of open crevices and volcanoes. Heavy rain spilled to the ground until there was mostly the liquid form left behind, although an atmosphere kept the water vapor cycle continuing.

Eventually there was a great land mass that water didn’t cover, much like Genesis 1:10 explains when the waters and land gathered. Pangaea is the name for what we call continents as one big whole. Out of the waters came life (Genesis 1:20) both according to Scriptures and Science. At this point a great argument will be made over Evolution and Creation as the way life was produced. The point that the Scriptures are trying to make is that everything we know today first came from the waters, although the dust is mentioned in relation to humans. This will be explained in a later post. Going out on a limb with the speculations, I think that birds are mentioned (Genesis 1:20,22) so early because they are direct descendents of dinosaurs. Although still questioned, most paleontologists have concluded that we live with dinosaurs when looking at birds. Dinosaurs in the Scriptures? I would like to think so, although again we are looking at the end product and not the process. The later mention of cattle, creeping thing, and beast (Genesis 1:24-25) is symbolic of the animals we currently live among.

One difficulty with this reading is the prominent mention of plants (Genesis 1:11-12) coming before the other animals in the narrative. The fossil record has land plants coming much later and after other complex life has developed. Remembering that there isn’t a true linear path to follow, having plants as the first land inhabitants isn’t an anachronism. The focus is on the solid Earth as the destination for humans. Plants act as a starting point for what will eventually inhabit the dry land. How plants actually became land based still remains a scientific mystery, although there is the theory that fungi helped with the transition.

A note on “after their kind” must be mentioned. This is my sticking point with Evolution as explained in the random thoughts post. There isn’t a lot of physical evidence that one species can become another. What experimentation has shown is an animal will replicate a similar copy even when producing mutations. Even so, the theory is that time and geography makes the difference. The building block of DNA is also blueprints to the next generation. Changes will be slow and deliberate over time with little variance. The argument by Creationists that a Cat will not produce a Dog is in agreement with what Evolutionists understand. It is the DNA that produces the animal and causes any changes in the physical structure. Abraham 4 brings into the discussion the curious phrase, “And the Gods saw that they would be obeyed.” The implication is that they might not obey, but did. The process of Evolution could be, with the help of DNA, a form of pre-programmed biological algorithms. Some become random equations that end up dead ends or unique lifeforms that branch out fulfilling the measure of their creation.

I will quote Doctrine and Covenants 59:18-21 as part of a final thought:

18 Yea, all things which come of the earth, in the season thereof, are made for the benefit and the use of man, both to please the eye and to gladden the heart;

19 Yea, for food and for raiment, for taste and for smell, to strengthen the body and to enliven the soul.

20 And it pleaseth God that he hath given all these things unto man; for unto this end were they made to be used, with judgment, not to excess, neither by extortion.

21 And in nothing doth man offend God, or against none is his wrath kindled, save those who confess not his hand in all things, and obey not his commandments.

Rejecting what science tells us about nature is a form of denying God’s handiwork. Using the complex process of Evolution to deny God is arrogance about our own knowledge. Next stop will be the Garden of Eden.