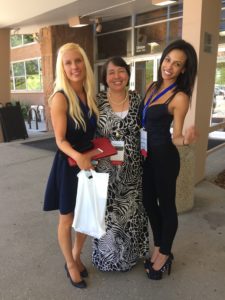 This past few days I’ve been at Sunstone, where I made a presentation about the Illicit Intercourse heresy of 1841 and 1842.

My point to all I talked with, whatever their persuasion, is that this history makes a huge difference in how we interpret our past. It has huge power to help us own our now and plan our future. I’ll be putting the audio together with the slide deck in the next day or so.

In the meantime let me mention a couple of the things I saw at Sunstone.

I learned that Exmormon Reddit is approaching 50,000 members, with about 1 million unique views per month. Apparently I had been a member of that Reddit group before under my own name but my account has now been deleted. I was assured that it probably had to do with the fact that I simply haven’t gone to that site in years now.

I saw Kate Kelly and chatted with her. She’s moved on from the faith and marriage that she was in when she was excommunicated. But the folks seeking female ordination in the LDS church are still active in attempting to make their point. I shared the experience I had of blessing my son before his death, at a time before I had come to realize that such things are not necessarily kosher under current policy. There is a documentary in the works about Kate Kelly’s journey, and the trailer includes footage of the moment when Kate learned she had been excommunicated. While I wished she had handled her disciplinary trial differently, it was a raw and painful moment.

I popped in on one presenter who happens to be from my stake. It was good to hear him talk about how we become one, but I’m afraid I brought a bit of the “no prophet is honored in his own country” to that session.

On Saturday I caught a session about the minutes of the Council of Fifty. It is good to have those records. But I would argue people shouldn’t be held to their most wild and fevered statements immediately after a murder.

The final session I was able to catch focused on female body image. The two main speakers are both involved in professions that focus on the human body. The first lady is not Mormon. She was a Playboy Playmate of the Month in 2011 and currently helps couples learn to more fully receive physical fulfillment from one another. The second, Sasha, is an active member of the church and her profession is dancing in strip clubs. Her tale is one of terrible abuse, homelessness, drug abuse, and rape. In short, a life from which becoming a very good stripper is a step up. And the entire time, as she struggled with the different stages of her life, she continually and faithfully came to church and held on to her faith in Christ.

As I left Sunstone to rejoin family and make sure I could actually catch my flight home, I ran into these two outstanding women, one who knows nothing of Mormonism and another who has held to the pure faith of Mormonism despite a rather atypical journey. I had shared some of my past experience during the Q&A session, so the three of us were pleased to have a picture taken, which for me was the only picture of this conference.

How do we love all the children of God, whom He loves, even when their lives differ so much from our own? Particularly in cases where their work could be seen as being in conflict with our own dearest hopes?