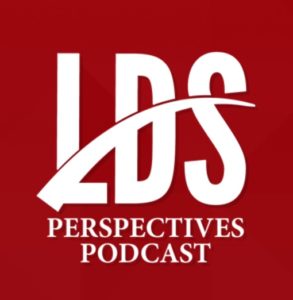 If you’re like us, you really enjoyed listening to the LDS Perspectives podcasts Laura Hales was cross posting here at Millennial Star. With summer upon us, Laura’s been focused on other things. And she probably expects most of us will have subscribed directly to LDS Perspectives by now.

In case you hadn’t yet subscribed, here are links to the episodes that have come out since mid-June. The thumbnails here are adapted from the LDS Perspectives summaries.

Historical context helps to shed light on the extent to which the Temperance Movement may have been an influence on Joseph Smith and the Saints at the time the Word of Wisdom was written. Nick Galieti and Jed Woodworth delve into what is often  referred to as the “Lord’s Law of Health.”

Join Laura Harris Hales as she and Stephen Smoot discuss the divine council’s role in the religions of the ancient Near East and what references to the divine council in the LDS canon could mean for Latter-day Saint theology.

Episode 43: Discussing the Priesthood Ban with Members of the Genesis Group Jul 5, 2017

The Genesis Group was started in 1971 to address needs of the growing number of Black members at a time when the priesthood was witheld from some. The blessings of the priesthood were made available to all in 1978 under Church President Spencer W. Kimball. Yet the need for a specific ministry assisting Black members has persisted.

Nick Galieti talks with the current Genesis Group presidency and their wives about their lived experience with race and the LDS Church.

It was common knowledge in the 19th century that the lectures were written by Sidney Rigdon, but by the mid-twentieth century many came to believe the Prophet Joseph Smith had penned them. Noel Reynold discusses new historical evidence that proves Sidney Rigdon was the author of the Lectures on Faith.

Historical accuracy is actually a modern concept. Biblical writers often fashioned history to teach a higher purpose. If some of the historical details were fudged, then that was regarded as acceptable if done to make a point.

Laura Harris Hales talks with scholar Ben Spackman about the different genres of literature found in the Bible.

Handley suggests criticism, compassion, and charity must work together to create a quality intellectual and spiritual life.

Critical judgment allows us to analyze a situation deliberately and calmly. But it is compassion and charity for those within the church that helps people who struggle make the decision to stay within the LDS faith.