This is a guest post by Hanna Seariac, who recently graduated from Brigham Young University with a BA in Classical Studies. She is a MA student at BYU in Comparative Studies and seeks to become a religious author and an apologist for the Church.

Ex-Mormons often get much wrong about the Church of Jesus Christ of Latter-day Saints, but something they get right is that the progressive movement in the Church does not reflect the teachings and doctrines of the Church. Progressive Mormonism, not to be confused with members of the Church who happen to identify as liberal or progressive politically, represents a small section of the Church who often do not uphold the doctrinal sexual ethics that exist.

These Progressive Mormons often attack and denounce The Family: A Proclamation to the World, but ignore that it qualifies as doctrine. Proclamations exist to reaffirm doctrine and act as documents to regulate the Church. Not upholding these documents is in direct conflict with the temple recommend interview questions, which ask us if we sustain the leaders of the Church as well as the doctrine that the Church teaches.

Clearly, a document signed by the free will and choice of every member of the Quorum of the Twelve Apostles and First Presidency (including Elder Holland and Elder Uchtdorf) represents doctrine not just because the Church simply states that it does on their website, but it is the unanimous voice of the Lord’s Church.

While the Church can potentially err on policy, asserting that the Church errs on doctrine (i.e. eternal truths) is antithetical to its nature and structure.

END_OF_DOCUMENT_TOKEN_TO_BE_REPLACED

If the LGBT movement has done one thing right, it has alerted much of America to the difficulty minority groups experience. One good example of this is Mayor Pete Buttigieg’s recent explanation of his own journey to being out as a gay man. As one of the leaders of the Church of Jesus Christ of Latter-day Saints, President M. Russell Ballard, said:

END_OF_DOCUMENT_TOKEN_TO_BE_REPLACED

I recently exchanged some correspondence with a good man regarding the law of chastity, and felt like some of what I said may be of interest more generally.  The context of the discussion was related to whether or not same gender dating was harmless exploration and discovery or a violation of the law of chastity.  We disagreed on this. I argued that we need to be concerned with the letter and the spirit of the law, and that the spirit of the law was much stricter that who put whose hands where.

First, it is not only what we do physically that can constitute sin.  The law of chastity can be violated without ever touching another person. We are taught that “whosoever looketh on a woman to lust after her hath committed adultery with her already in his heart”[1]and “our thoughts will also condemn us.”[2]  The guidelines released recently regarding missionary worthiness included teachings that “to be chaste, you must be morally clean in your thoughts, words, and actions,” importantly not just your actions.  Homosexual activity is also called out as a serious sin, because, at least in part, “it distorts loving relationships and prevents people from receiving the blessings that can be found in family life and the saving ordinances of the gospel.”[3]

Second, “dating” is not a term that is equivalent to “going out socially.” Dating, as it is understood colloquially, is always a precursor to more.  This is why we teach the youth to put it off until they are older.  This is why we teach the youth to go on group dates, and to not date the same person exclusively before they are ready and prepared to make eternal commitments.[4]  The purpose for dating, in the structure of the gospel, is to prepare for the highest ordinances of the temple, and commitments made between God, one man, and one woman, and to create family units in which a man and a woman can keep the very first commandment given to Adam and Eve to multiply and replenish the earth.[5]  This commandment that is still in force,[6]and represents something that is impossible in a homosexual union.

The For the Strength of Youth pamphlet takes it as a given that a date is between a young man and a young woman, and states that explicitly.[7]  Dating someone of the same sex is a counterfeit that we have been warned about by the prophets and apostles, and most directly by Elder Perry a few years back.[8]

Third, this is where we need to start considering the spirit of the law of chastity.  The law of chastity, like all gospel commandments is aspirational while also being prohibitive.  The aspirational part is the most important.  It teaches us to be pure in preparation for marriage as it is defined by God.  There are things we are told will defile us in action and thought, but avoiding those things is only meant to add strength and glory to fulfilling the goal of an eternal family.  One cannot take his or her sights off of that goal and remain on the covenant path.  Merely keeping one’s hands to oneself until a proper marriage, along with fidelity therein, fulfills the letter of the law. Worthily and chastely entering into a marriage sealed under proper authority, where covenants are kept and cherished, fulfills the spirit of the law.  Anything short of that violates it.

Yes, there is no sin in being attracted to somebody, but there is sin in mentally flirting with sin. There is sin in imagining and pining over sin.  There is sin in pursuing a relationship, even if no touching is involved, that “prevents people from receiving the blessings that can be found in family life and the saving ordinances of the gospel.”  It is a mistake to wink at homosexual dating as being harmless so long as they keep their hands to themselves.  To come to that conclusion one must look only to (a part) of the letter of the law while ignoring the spirit of the law.  Pursing a homosexual relationship is inconsistent with the aspiration of the law of chastity, it is inconsistent with the spirit of the law. To say homosexual dating is innocent, even when keeping their hands to themselves, is to deny God’s word and His purpose for us.  It is a mockery.

My good friend has not replied to this, but I hope it has given him, and now you, some food for thought.

[4]  For the Strength of Youth

[6]  The Family: A Proclamation to the World

[7]  For the Strength of Youth

[8]  Why Marriage and Family Matter – Everywhere in the World, by L. Tom Perry, April 2015 General Conference

Michael Davidson is a repentant attorney, father and husband. This post is cross posted to his personal blog “Exploring Redemption.”

It seems that the excitement of General Conference started a bit early this year.  The Deseret News and the Church Newsroomhad articles this morning talking about changes to policies related to discipline of people engaged in same sex marriages and the legal children of such individuals.  Despite a lack of specifics regarding what the new guidance in the Handbook entail, the usual suspects are declaring victory. Some are claiming that this vindicates the role of activism in the Church towards changing Church teachings; others are claiming that this is being forced by a drop in tithing revenue; while others are claiming that this is an effective repudiation of revelation as a guiding force in the Church.  All of this is nonsense.

Let’s put some of the discussion in context.  In the summer of 2015, there was a young lesbian couple who were attending a ward in the Seattle Washington North Stake.  They got engaged and announced their intention to be married publicly.  According to their blog entries about this matter, this resulted in a series of conversations with their bishop and their stake president in which they were told in no uncertain terms that they would face church discipline if they went ahead with their plans to marry.  These blog posts created a great stir in some quarters, and I suspect that the bishop and stake president involved received communications of varying degrees of politeness in response.

END_OF_DOCUMENT_TOKEN_TO_BE_REPLACED

This is a guest post by Jacob Hess, PhD, author of A Third Space: Proposing Another Way Forward in the LGBT/Religious Conservative Impasse. Jacob is also on the board of the National Coalition of Dialogue & Deliberation.  He blogs at Unthinkable.cc 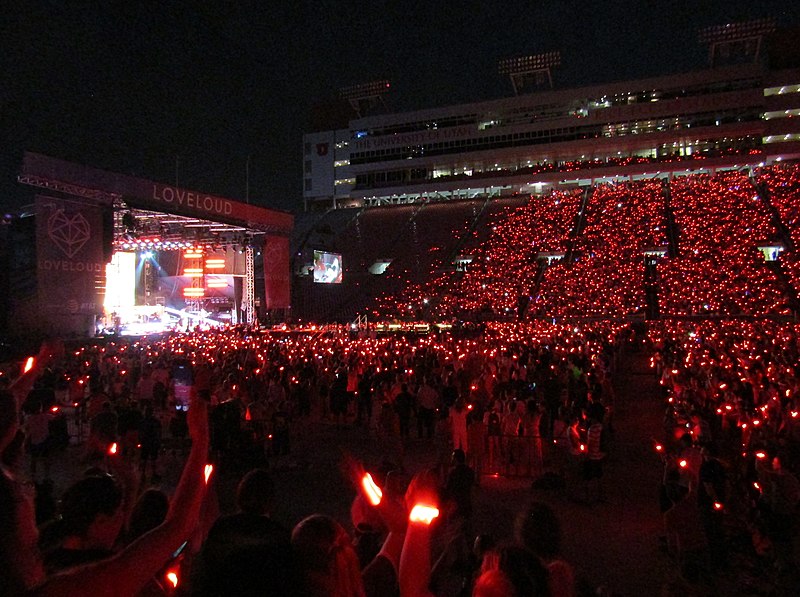 Standing in the middle of 30,000 people, it’s hard – even impossible – to imagine that something could be wrong with what’s happening.  It’s even more difficult to imagine that such passionate work may, in lasting ways, make things worse for the very teens we’re all worried about.

But, for reasons outlined below, that’s exactly what I believe is happening with Dan Reynolds’s Love Loud festival  – an initiative so the rage that Utah businesses and political leaders, Mormon celebrities, and increasing numbers of millennials have come to rally behind it, with messages like this:

How could anyone possibly be concerned with such a cause?  What kind of a heart of darkness is required to question a call to love more loudly?

Our non-conversation.  The terms of our prevailing “conversation” about love, sexuality, faith, suicide and identity these days don’t leave much space for disagreement:

I’ve begun calling this conversational frame what it most fundamentally is:  dishonest. END_OF_DOCUMENT_TOKEN_TO_BE_REPLACED