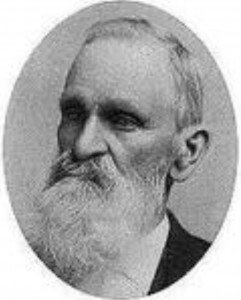 There are at least two men who became public husbands of women who were sealed to Joseph Smith in the 1840s.

The first and most well-known of these was Joseph C. Kingsbury, who documented that “on the 29th of April 1843 I according to President Joseph Smith council & others agread to Stand by Sarah Ann Whitney as supposed to be her husband and had a pretended marriage…” 1

The second and almost entirely unknown of these was Jonathan Harriman Holmes, who in the 1860s told his children and friends that his wife, Elvira Annie Cowles, had first been the wife of Joseph Smith, that he, Jonathan, had agreed to be her husband after Joseph’s death if she wished it. When taken together with the fact that Joseph Smith performed the December 1842 ceremony wedding Jonathan Holmes to Elvira Annie Cowles, the December 1842 marriage can be seen as a pretended marriage, like that of Joseph C. Kingsbury to Sarah Ann Whitney. 2

Both Kingsbury and Holmes were widowers. In each case, the man was subsequently sealed to the bride of his youth in the Nauvoo temple. It is clear in the case of Kingsbury that the promise of being sealed to his wife and someday reunited with his dead children was convolved in his willingness to be a pretended husband to Sarah Ann Whitney.

When Were These Things Documented?

I had read the excerpt from Joseph C. Kingsbury’s journal in various books. But it was not until last night that I read the manuscript of Kingsbury’s journal while browsing the Book of Abraham Project (boap.org). The information that no book had forced me to understand was that the account in Joseph Kingsbury’s journal is part of a recollection spanning roughly two decades. The tale itself wasn’t written until 1848, after Joseph Kingsbury had arrived in Utah. While this makes it more timely than the second hand descriptions of Jonathan Holmes’ account, it is still over five years after the actual events. 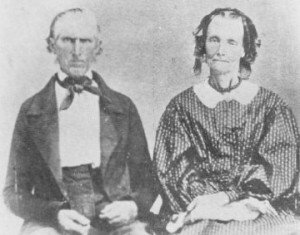 As for the descriptions of Jonathan Holmes’ account, the arrival of the Wright family in Cache Valley, Utah, and the marriage of Jonathan’s oldest daughter, where she first learned she had a covenant relationship to Joseph Smith indicate that Jonathan’s explanation of becoming Elvira’s husband only after the death of Joseph Smith could not have occurred prior to the late 1860s.

As I mentioned in the Manuscript of Eliza Snow’s Journal, Eliza Snow wrote a poem that in its current form appears to be dedicated to Jonathan Holmes and Elvira Annie Cowles, pictured here near the end of Elvira’s life, circa 1869. 3 But the poem was modified before December 1842, based on a change in ink after that point. Aside from splotches that could be traces of tears, there is a word entirely scraped from the page, which was replaced by the word “rays”. The original word appears to have been “angels”. 4

Eliza Snow was not at that time in the habit of editing her journal by scraping words from the page. In those early days of her journal, edits are made using interlineal additions or lining out the word that is no longer desired.

The poem Conjugal as currently written is a uniquely beautiful expression of the eternal union of a couple. 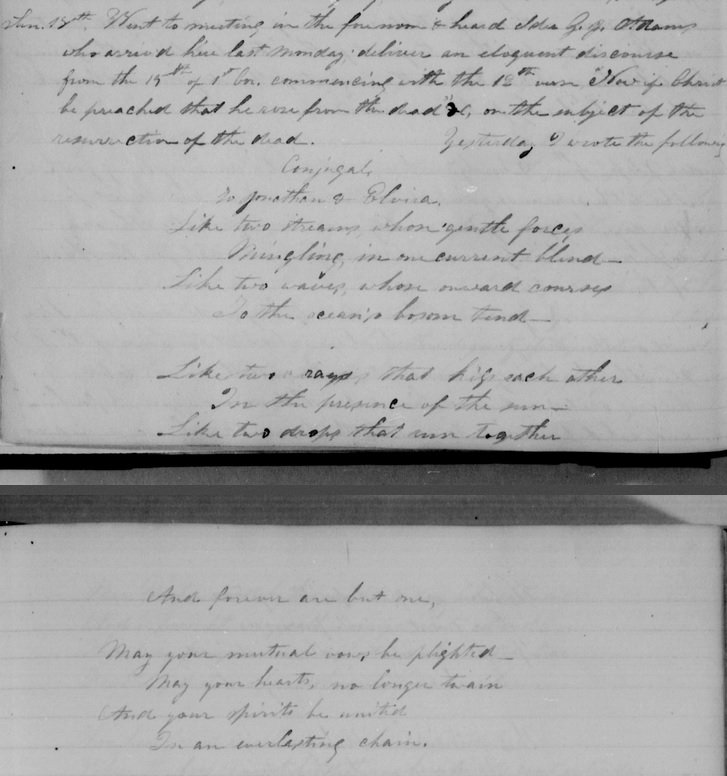 Like two streams whose gentle forces
Mingling in one current blend —
Like two waves, whose outward courses
To the ocean’s bosom tend —

Like two rays that kiss each other
In the presence of the sun —
Like two drops that come together
And forever are but one,

May your mutual vows be plighted —
May your hearts, no longer twain
And your spirits be united
In an everlasting chain.

But the original poem, as I believe it to have been written, is more explicitly about a couple who have been parted by death, who will be reunited in eternity. This is explicitly the promise Joseph Kingsbury describes with respect to his departed Caroline. This was the covenant that Jonathan Holmes was able to enter into with his departed Marietta.

The image below has been digitally altered to show how the poem might have originally looked, with angels in the place of rays and without the addition of writing that crowds the original title, including the dedication to Jonathan and Elvira: 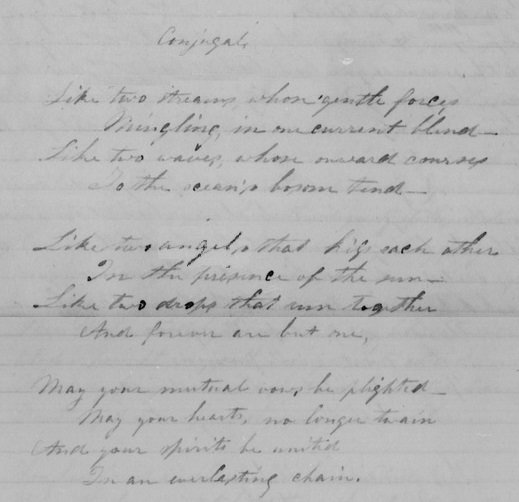 Like two streams whose gentle forces
Mingling in one current blend —
Like two waves, whose outward courses
To the ocean’s bosom tend —

Like two angels that kiss each other
In the presence of the sun —
Like two drops that come together
And forever are but one,

May your mutual vows be plighted —
May your hearts, no longer twain
And your spirits be united
In an everlasting chain.

I have put before you all I can to show why this poem warrants additional investigation. As this poem relates to my direct ancestors, I have a family interest in the answer. I welcome any interpretations of this poem, a contemporary record to the marriage of Jonathan and Elvira in what appears to have been a “pretend” marriage, similar to that of Joseph C. Kingsbury and Sarah Ann Whitney.

I suggest that when Eliza originally wrote the poem in her journal (September 1842), she expected that she would be the woman protected in a pretend marriage with Jonathan Holmes. But that at some point prior to December 1842 an event occurred that eliminated her need to be protected in a pretend marriage. Thus the tears and the modification of the poem.

Alternate readings are welcome. I will be less than thrilled if the explanation is “there’s nothing here,” as the poem was obviously modified and the “a” and “s” are clearly evident even in this image of the digitized version.

6 thoughts on “The Pretend Husbands”