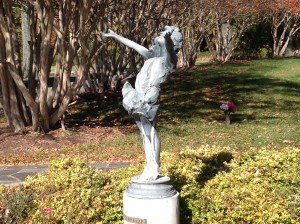 As today is fast sunday, I wasn’t in a hurry to rush home when services let out this afternoon. So on a whim, I drove my car to the nearby cemetery where family members rest in peace.

It was a gorgeous fall day, bright and brisk. For me this cemetery is a place of happiness, a location we used to visit frequently as children, chasing the geese around the green lawns or feeding the black swan that lived near the central pond. My baby sister had been interred there in the late sixties, and so visiting the cemetery was something my mother did rather frequently.

In the nineties I had a child diagnosed in utero with a severe heart defect. Given the high probability of death, it was natural to contact this same cemetery to be the resting place for my son’s remains, were he to pass. After the brief, hopeful week following his birth, his heart gave out. So we laid him to rest in the same area where my sister was buried decades earlier, a heart-shaped corner of the cemetery known as BabyLand. 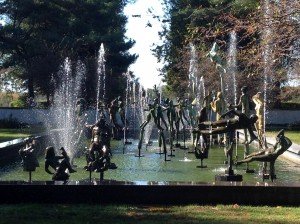 Today as we arrived at the cemetery, I glanced as always at the impressive fountain sculpted by Swedish artist Carl Milles. Most of the time the fountain is off, and the dry figures look lost, solitary, and forlorn with a dry patina of green. But today the Fountain of Faith was on, and I could see Carl Milles’ vision of loved ones reunited in God’s heaven.

I read that Carl Milles eventually got used to American sensibilities enough to have a fig leaf maker on hand. I don’t recall off hand if the Fountain of Faith has received the fig leaf treatment, but I did always think the figures in the fountain looked so cold in the winter, being without clothing.

After visiting the fountain, we continued to BabyLand.

The visit was brief. We told Katie about her sweet little nephew, who is one month old today. I had a chance to explain again to my autistic daughter how Katie passed away, the poor cough reflex that had initially given my mother peaceful nights. But the lack of coughing had proven fatal at the three month point when the voice box shifts within a human infant to permit speech, a shift that also makes humans the only animals that can choke to death.

Next we stopped by Arthur’s grave. We told him to be a good boy, as he works in God’s service on the other side. We apologized for not bringing a pumpkin or flowers, but then talked about the pros and cons of the different offerings people bring to grave sites. 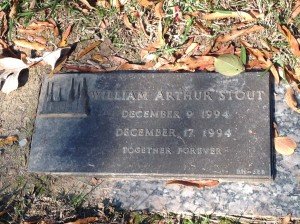 Today was also a day to be glad for the continued life of those who had flirted with death this past year – the brother-in-law who spent five months in the hospital after a heart attack, my mother who recently went under the knife to remove cancer.

Death holds no fear for me. I find myself possessed of a firm faith in the eternity of the soul. I trust that God will exalt all but those who actively reject this blessing by either decision or action. When my own time comes to leave this realm, I will be pleased to rejoin those I love who have gone on before.

But for now I will rejoice in life and the sweet association of those who remain in this life.

6 thoughts on “The Day of the Dead”