The Temple Institute ( Hebrew translation: Machon HaMikdash) located in the Jewish quarter of Jerusalem’s Old City, was founded on the principle of action. Rabbi Yisreal Ariel, a distinguished Rabbi and founder and head of the institute since 1987 is paraphrased in the following from the website:

Every generation is obligated to do all within its power towards rebuilding the Holy Temple this, as opposed to those who believe that we must wait for the Messiah to arrive before it can be rebuilt. 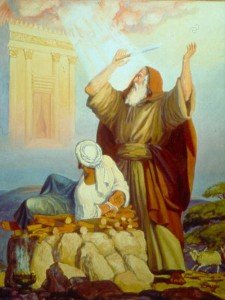 Currently the major focus of the Temple Institute is to restore and reconstruct  the consecrated vessels for actual service in the Temple. The sacred implements are not models, but devices made to exact descriptions, found in the the Torah, crafted from gold, silver, copper and wood by Israeli artists and craftsman. Completed items include the gold crown of the High Priest, a pure gold menorah, gold and silver vessels used in sacrificial service, musical instruments, breast plate and garments  have been made to exactness sparing no expanse. In addition to holy devices, Artists have created paintings to dress and adorn the future temple. 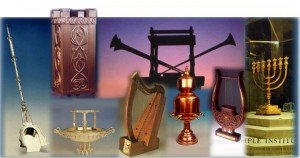 How has such a marvelous work come to pass?  The hearts of the Jews have changed in regards to the importance of Temple worship. Temple Institute founder Rabbi Ariel. served as one of the paratroopers who liberated the Temple Mount during the Six Day War of 1967.  One of the first soldiers to reach the sacred mount; Rabbi Ariel has related the following account:

It is so very difficult to describe the feeling that filled us during that extraordinary time in the life of the nation. The words “ringing the bells of the Messiah” expressed in a limited way what was being felt in the heart.

This lead to a certain sense of letdown that so many of us experienced. After all, we had arrived at the threshold of the Holy Temple: we are standing at the western wall – where is the Messiah?

In the passing of time as I pursued my studies, I discovered our expectations were simply misplaced.

Through the years, the more I studied the more I began to understand that we had only ourselves and our own inaction to hold accountable: G-d does not intend for us to wait for a day of miracles. We are expected to act. We must accomplish that with which we have been charged: to do all in our power to prepare for the building of the Holy Temple, and the renewal of the divine service. (page 526, Siddur HaMikdash, translated from Hebrew

Another interesting aspect of the Temple Institute is re-establishing the Sanhedrin fulfilling the Jewish prophesy of the re-establishment of the Sanhedrin before the coming of the Messiah. The modern Sanhedrian, is a diverse  assembly of Rabbis, from the various Jewish sects  (Orthodox, Conservative, Ashkenazi, Sephardic etc..) with the addition of scholars. Among the issues discussed by the body of the Sanhedrian include; assisting Anousim from Spain and Portugal and others whose ancestors were forced to convert lost Jewish tribes from other parts of the world.

In closing, I leave you with a prophesy from Joseph Smith:

Thus we behold the keys of this Priesthood consisted in obtaining the voice of Jehovah that He talked with him–Noah–in a familiar and friendly manner, that He continued to him the keys, the covenants, the power and the glory, with which he blessed Adam at the beginning; and the offering of sacrifice, which also shall be continued at the last time; for all the ordinances and duties that ever have been required by the Priesthood, under the directions and commandments of the Almighty in any of the dispensations, shall all be had in the last dispensation, therefore all things had under the authority of the Priesthood at any former period, shall be had again, bringing to pass the restoration spoken of by the mouth of all the Holy Prophets; then shall the sons of Levi offer an acceptable offering to the Lord.” And he shall sit as a refiner and purifier of silver: and he shall purify the sons of Levi, and purge them as gold and silver, that they may offer unto the Lord. (See Malachi 3: 3). Joseph Smith’s teachings in History of the Church 4:210-11: