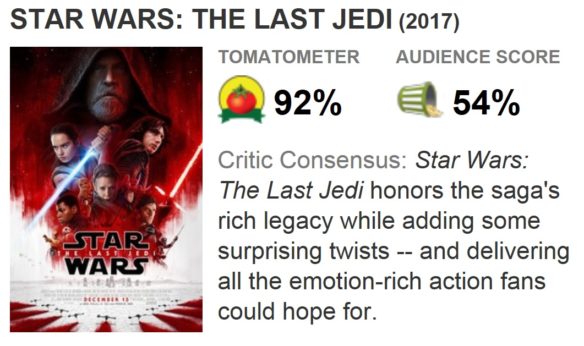 Someone got busy and used bots to drag down the audience rating for the most recent Star Wars film. Alt right folks are claiming credit, suggesting that men should rule rather than women.

It’s not clear that the Alt right folks actually did the deed.

If you like sci-fi and are looking for something to do this weekend the Last Jedi is worthy of consideration.

But if you leave the theatre wondering why you don’t quite feel satisfied, click through to read my analysis. Warning, my analysis contains spoilers.

The cast is great. And it’s a true treat to see Carrie Fisher in what will be her last film. The actors did well, given the story and inherent motivations the writers gave them to work with.

For the most part, the CGI effects are sufficiently smooth that one can suspend disbelief.

The glaring exception is Supreme Leader Snoke, whose appearance and movements screamed motion capture. Despite the admirable performance Andy Serkis put in, Snoke didn’t appear to have all his internal joints connected, and his face was unnecessarily lopsided, with impossible things going on.

Millennials, move over. Hail the Centennials, young folks comfortable with the internet and action who apparently aren’t supposed to feel that lineage or religion matters. In that vein, it appears the writers have decided the target audience will appreciate characters who are willing to kill the past and abandon tradition.

Parentage: In the original series, it was extremely important that Luke Skywalker had a right to his extraordinary powers. This portion of the epic presents us with Rey, who doesn’t know who her parents are. Yet her powers are so extreme, that it suggests the mystery of her parentage must be profound.

Perhaps a subsequent film will explain that she is, indeed, the beloved child of extraordinary individuals unusually gifted in channeling the Force. But this film has Kylo Ren explain to Rey that her parents were lowlifes of no importance. If this is supposed to be a great big lie, there was no foreshadowing to hint Kylo Ren was lying.

Religion (Jedi): Somehow we have arrived in this universe at a situation where there is only one actual practitioner of the old Jedi religion, and he has become a recluse. He has abandoned the Jedi religion and he’s crotchety about it, too.

When we finally learn the reason he gave up, it is entirely insufficient to explain what has followed. Luke decides to destroy the tree apparently worshipped by the Jedi along with all the ancient texts. When he can’t, a ghostly Yoda shows up and does the deed. [The viewer will possibly notice in a later scene that Rey has the ancient texts with her in the Millennium Falcon, which makes Yoda cryptic comment, about Rey having everything the books contained, a little too literal.]

Yet we have Rey and Kylo Ren as characters who are adept at wielding the Force. From this I suppose one was to take away the idea that formal religion is hard to understand and stultified, given that the power associated with that religion is being practiced without reference to the old established structure.

Instead of the Jedi as protectors, we have the Rebel symbol surging to the fore as the mythic organization that will unite future hopefuls.

Action, Lots of It: Centennials have been weaned on Sriracha and Marvel movies: everything must be spicy and action-packed. But that leads to a more significant comment…

Last Jedi gives us lots of action and tension, interspersed with humor. The writers wanted a final scene where Rey is levitating the rocks of a landslide to rescue the few remaining Rebel soldiers. To have that scene, the Rebels had to be threatened and trapped.

In order to trap the Rebels, the bad guys had to have discovered their hiding place. They are able to do this because of a quisling who had ostensibly been helping a trio of Rebels in a desperate and unauthorized bid to save the Rebel fleet.

The trio of Rebels embark on their mission because they believe Admiral Holdo (Laura Dern, elegantly slender in lavender) is pursuing a hopeless path.

Ultimately, however, the rogue trio learns that Holdo had planned to get close enough to an unmapped Rebel base to transfer the surviving Rebels.

Holdo is a great character, and because of her we have some great cinematic moments. But WHY DIDN’T SHE TELL EVERYONE WHAT WAS GOING ON?

There was no need in the story as it stood for an Admiral to keep the ultimate plan secret from the Rebels attempting to escape. Therefore there was no need for the trio to embark on their rescue mission. And they would never have brought back DJ, the quisling, who is the reason the bad guys detect the escaping transports and blast most of the Rebels to oblivion.

It’s so sad that Carrie Fisher is dead, since the movie ends with Leia alive and Luke departed.

In other news, this film gives us lots of people dying in service of fulfilling the orders of their leaders. One of these deaths is particularly poignant, which ends up powering scenes involving Rose Tico, an Asian maintenance engineer. However it appears the writers presumed that we would actually care about Rebels dying because they are supposed to be the good guys. But we were never given sufficient time with most the doomed Rebels to actually care that they died.

Proposed Fixes in the Third Film

Holdo had no reason to withhold information in the story as it was, but she would have been justified had there been some treasured thing or population on that unmapped base. The jeopardy to this asset would have justified her secretive actions. If the third film can explain to us why it was OK for her to be so secretive, future Star Wars marathons won’t have to leave us mocking Holdo/Dern for stupidity.

Rey is unusually gifted in wielding the force. Despite Kylo Ren’s assertion that she comes from nothing, it would be good for the third film to explain that her origins are something higher than dung heap. It would be particularly interesting if she were somehow Kylo Ren’s sibling (making us even more glad she doesn’t join him in this movie).

Make DJ, the quisling, somehow a critical part of how “BAD” gets overthrown. That would justify all the action in this film that seemingly was only good for getting most of the fleeing Rebels killed.

Last Jedi is good. Depending on how the final movie (out Dec 2019) revisits the past, Last Jedi might turn out to have been very good as part of the whole. But unless certain parts of the story serve the grander arc, it appears this movie was willing to create needless lethal drama just to fill the minutes with cliffhangers and spectacle.

I understand the 92% the critics give this film, but I’m not sure malicious bots alone explain the 54% currently attributed to the audience.