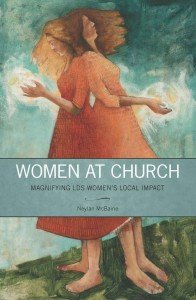 Neylan McBaine’s book about how much we can do to maximize women’s roles in the service of God came out in August 2014, but it only recently came to my attention.

It is interesting to read Neylan’s book in light of having so recently lived through this past year, with the launch of the Ordain Women discussions/conversations and the excommunication of Kate Kelly. Neylan makes it clear that she is not agitating for changes that aren’t already possible within the current structure of the Church. From something she wrote recently, it seems some have criticized her for going beyond the mark.

Due to my own study of this matter, I was a bit disappointed to see a book so uniquely focused on the issue of women. This comes because I have studied the effect ordaining women has had on other denominations. So while Neylan isn’t agitating for female ordination, I was a bit cautious reading of some innovations that take away from the opportunity for men to have space to feel safe at Church. Also, frankly, it appears to me that the great challenge for the Church is retaining men, particularly retaining men from outside America. However we don’t want to lose anyone, male or female.

Neylan brings much that is wonderful to the fore. She does point out painful circumstances some women and those who love women have experienced. However she also shares how at times individuals, both men and women, have adjusted their stewardships to more richly bless all in the congregation.

I have lived a life where I have enjoyed the leadership of many single Relief Society Presidents over the decades, have often had the chance to participate in ward councils (even when not even in a presidency of Relief Society, Primary, or Young Women), had the responsibility to provide bread for the sacrament, and have had chances to participate alongside “the men,” as when members of our stake spent the extended Thanksgiving weekend mucking out the still-sodden homes flooded by Hurricane Sandy.

Even so, I have had my moments of banging my head against stupid (as I perceived it at the time). I enjoyed many of the innovations and insights Neylan discussed throughout the book.

The one that inspired me the most was the story of a woman who made a sacrament of preparing a loaf of sacramental bread. In addition to flour, she used yeast, salt, olive oil, honey, and water, all ingredients with scriptural significance. She then kneaded the bread by hand and carefully kept it covered with a white cloth, rather than the red cloth she usually uses. I was deeply touched. Yet when I tried to tell members of my family about it, they were non-plussed or actively negative. Not that they had a problem with a woman preparing the sacramental loaf. Rather they perceived that this could turn into an odd sort of competition, a way women (who don’t have the confidence in baking bread that women in my family possess) could feel further marginalized.

As I read Women at Church, I was frustrated by the lack of footnotes. When I finished, I found that there had been references after all. However lacking any kind of signal in the text that these were present, it was impossible in the kindle version to flip between the references and the text. Thus I would suggest that future books of this nature at least include some kind of annotation to allow a curious reader to locate the source when something catches their interest.

If you participate in a book group with other Mormons, I think this would make an interesting text to suggest.

I liked a quote from Elder M. Russell Ballard’s book Counseling with Our Councils, though I would have worded it a bit more strongly:

To be perfectly candid, I sometimes have a difficult time understanding why so many of our leaders fail to see the vision of how working through councils can enhance their ability to accomplish all that the Lord expects of them in their respective stewardships. . . . It is a shortsighted priesthood leader who excludes or ignores sisters, failing to take full advantage of their understanding and inspiration . . . . It is easy to understand why many sisters are frustrated when they sit in council with priesthood leaders and are not invited to make substantive contributions to the council.

I would also repeat something I wrote months ago in an April 2014 post titled A View of Keys:

If your pocket of Mormondom has been failing to take full advantage of the power of women (or anyone else, for that matter) due to tradition rather than policy/revelation, it’s time to shake things up and do better. If you need any ideas about what the challenges and potential solutions might be, I’d recommend you give Neylan’s book a read.