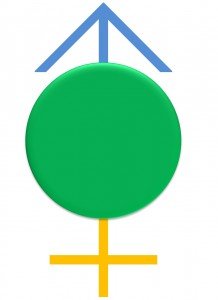 A Graphic of Elder Oaks’ address on Keys

I thought it might be useful to put up a graphic representing my understanding of Elder Oaks’ address at Priesthood Meeting. My apologies that this graphic isn’t beautiful.

Clearly I’ve adapted the traditional astrological symbols for Mars and Venus here. The little plus sign at the bottom of the circle derives from the distaff, the tool women traditionally used to support flax before it is woven – a symbol of the creation of products that has been a traditional role of women. Obviously women also perform the primary labor of producing children (gestation, birth, lactation). Plussing up the population of mankind, if you will. I made this symbol gold because it is wonderful.

The arrow in the traditional symbol points off to the side and represents a spear (vary male and phallic). In this graphic, however, the arrow is a sort of umbrella pointed towards God, representing both the umbrella under which all Church service is performed as well as the salvific ordinances that can reunite mankind with God. I made this blue. No reason.

What I heard Elder Oaks describe as well was the vast middle ground that is neither uniquely salvific nor uniquely related to creation. This is represented by the large green sphere and is shared by both men and women. The activities in this sphere are conducted under the umbrella of priesthood, but are only possible because there are individuals (necessarily added to the race and nurtured by women) who can perform the activities.

As we examine ourselves, do we find that this separation between salvific keys and creative keys frees us to challenge our traditional notions regarding the vast array of common responsibility that can appropriately be taken on by any member of the body of Christ?