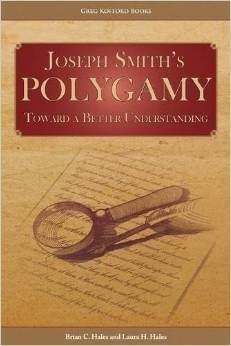 And now for the review that matters this month, the delightfully concise book about Joseph Smith’s Polygamy written by Brian C. Hales with the support of his bride, Laura Harris [Hales].

The main text of this book captures the heart of the point Brian C. Hales made in his three volume, 1500+ page master work titled Joseph Smith’s Polygamy. Some of these points are:

To my mind, Laura is the star of this effort. The essentials of the argument Brian C. Hales has been trying to make are here, in roughly 100 pages of text in the body of the book. Laura brings to the project a fine sense of when to stop talking. For example, this book doesn’t contain three chapters and a large appendix discussing Fanny Alger. Laura gets it down to one chapter that is only six pages long.

In writing there is a skill called “cutting.” It is amazing when performed by those who are experts, who have the ability to cut pages and paragraphs and words from an original document and yield a text that is more understandable and even more powerful than the extensive original from which it arose.

I am in awe that Laura was able to wrangle Brian’s original thoughts down from 1500+ pages to roughly 100. I was able to consume the book in just two hours after finding it in my mailbox today. 1

For those who have followed my Faithful Joseph series, you will be aware that I don’t agree with everything that Brian C. Hales has written. In this, he returns the favor. But when I step away and view the two of us from afar, we are like twins arguing over which side of our heads to part our hair.

My approach involved attempting to come up with a single coherent story that accounted for all the facts. And if that single story involved gut-wrenching possibilities (and even sex and terrible misunderstandings), I was good. I felt completely free to take advantage of all the freedoms the extant documents and surrounding culture allow me, and I have constantly adjusted my core narrative as I became aware of additional information. But I did not feel constrained to conform my narrative to the unfounded hypotheses of the evasive, underinformed, ignorant, or malicious raconteurs of the past. In my opinion, a possible history where Joseph consummated few, if any, of his plural marriages is intellectually satisfying and completely defensible. Ultimately, the history of Joseph’s last years could only have been one history, not a series of multiple choice options. Recognizing that truth, I think, is as important to unraveling Joseph Smith’s history as discovering an oft-repeated phrase was important to unraveling the German Enigma codes during World War II.

Brian (and Laura) have carefully built on the foundation of all that was written before. Though they admit that the record is imperfect, they lay before us what they believe to be “a reliable reconstruction of what likely took place.”

I hate to criticize where I feel they have uncritically accepted hypotheses. Because this work is much more important than the times I couldn’t help myself from scrawling comments in the margins. After all, it’s been 173 years since I think Joseph and Emma worked together to discover the identity of the particular individual who preached a “gospel” of secret illicit intercourse to a staggeringly large congregation. In all those 173 years, no one else writing about those events has documented what is so clear to me. But I will note a few areas of inattentional blindness and even learned wrong thinking that I perceive perpetuated in this concise (and therefore liable to be highly influential) text:

Quirks of this Book

When I reviewed Alex Beam’s American Crucifixion, I commented on his footnotes. In that vein, let me make a couple of comments about a few minor issues in Toward a Better Understanding:

Endnotes – Comment 1 – I use footnotes/endnotes extensively when I am seeking to understand why an author is asserting a conclusion. I even do this when studying conference talks and lessons in Church. Footnotes are extremely important to establish context and credibility. I give the Hales great credit that they rarely assert a conclusion without providing a footnote. However, their footnotes are unusually likely to point to some secondary source that tells the reader nothing about the circumstances or timing of the original statement. Perhaps this is a ploy on the part of publishers to promote book sales. ‘If you want to know that information, my dearie, you will have to buy that other book…’ Would it not be possible to say something like “Miller, George, letter of 3 March 1841, republished in Times and Seasons July 1842, summarized on page 159 of Random Book about Polygamy, 1986.” A footnote that tells me “Random Book about Polygamy, 1986, p. 159,” is obviously far less informative.

Endnotes – Comment 2 – I appreciate having all the endnotes collected at the back of the book. This makes it easy to just find the notes section one time and keep a book mark back there. However, it would have been useful if the main text contained an indication of what numerical chapter I was reading on each set of pages or if the end notes had contained an indication of the titles of the chapters (or at least a range of pages). I spent far too much of my two hours reading the book trying to figure out which set of end notes belonged to the particular chapter I was reading.

Biographies – Comment 1 – It took me the longest time to figure out how the section containing biographies of different wives was arranged. I finally determined that it was an alphabetical arrangement based on the first name of each wife. I found that particular organizational principle to be perhaps the least helpful of the alternatives, though I suppose last names would have begged the question of whether one used the woman’s maiden name or her last name at the time Joseph married her (which would have again begged the question of why some of these women weren’t still “maidens” when Joseph married them). Given the lack of precision regarding when some of the women became Joseph’s plural wives, my preferred method (arranging the women by order of marriage, as done by Todd Compton in his 1997 Sacred Loneliness) would have been similarly controversial.

Biographies – Comment 2 – Since I’ve studied the reproductive history of these women, I was frustrated that the biographies do not include information about the reproductive history of the women following Joseph’s death, particularly in the case of the women who were otherwise single during their covenant relationship with a living Joseph. Most of them were quite fertile once Joseph was dead. This while the wolf hunts were going on, the people were fleeing across Iowa, starving at Winter Quarters, and fending off rats and crickets around the Old Fort in the Salt Lake Valley.

Stepping away from the details I don’t agree with, this is a fine book on a topic that many find troubling. I appreciate the manner in which Brian and Laura attempt to get us to see Joseph’s introduction of polygamy in a new light. In the Introduction (p. xvi), the Hales provide an illustration of how description can be technically correct and yet entirely misleading. The vignette describes a masked man who enters a room at midnight where a woman is sleeping. He plunges a blade into the woman’s chest. Minutes later, she dies due to loss of blood.

As Brian is an anesthesiologist, I wonder if this event occurred in his presence. For the man was a surgeon in an operating room. The mask was a surgical mask. The woman had been sedated in preparation for surgery. The blade was associated with a scalpel. The blood loss was due to internal injury, which was the pre-existing condition that had prompted the need for surgery. The haste with which the surgeon had inserted the blade was an attempt to save the woman’s life. And this emergency surgery occurred when it was midnight somewhere in the world (maybe even locally).

Thus, I believe, it is with Joseph and Nauvoo. The facts of that time have been inferred to support the idea of an abusive man who betrayed his wife, treating himself to sexual intimacy with dozens of women. But when one drills down to the bare facts, shorn of inference, the possibility of a vastly different story emerges.

This book that Laura and Brian produced goes a good part of the way in that direction. I just wish they had further challenged the “facts” from which they construct their “reliable reconstruction of what likely took place.” Inasmuch as they failed in some cases to fundamentally question their assumptions, I think their book will similarly fall somewhat short in the intended purpose of bringing comfort and understanding to their audience, as seen from the reaction to the Hales’ Q&A with Ralph Hancock published in Meridian’s series on polygamy this past year.

6 thoughts on “Review: Joseph Smith’s Polygamy – Toward a Better Understanding”