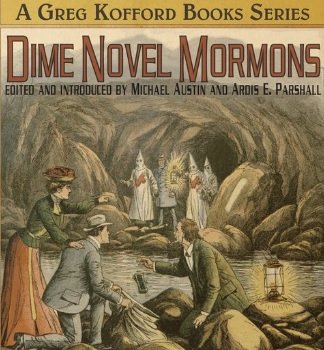 Ardis Parshall and Michael (Mike) Austin give us Dime Novel Mormons, a new delight in The Mormon Image in Literature series, published by Greg Kofford Books.

I’ve been head down in other things, but when I’ve come up for air, it’s been refreshing to contemplate the forgotten art of “books” that could be purchased for mere pennies. “Dime novels,” as they were called even when even less expensive, were sweeping adventures. They were something like comic books without pictures, making reading accessible to everyone. They were the Instagram of their day.

Not all dime novels featured Mormons. In fact, Ardis and Mike indicate the number of dime novels that included Mormons as characters probably made up less than 0.1% of all dime novels published. However these dime novels presented Mormonism to those who had no other concept of Mormons and their beliefs and practices.

The tropes we see in the dime novels included in this volume were repeated in other, more prestigious, forms of entertainment.

The four dime novels in this collection are overtly anti-Mormon, but are valuable precisely because they either informed later depictions or represent the evolution of how Mormons were depicted in response to significant events.

Eagle Plume, the White Avenger. A Tale of the Mormon Trail (1870)

Eagle Plume was not the first dime novel to feature Mormons, but this is the volume that created the mythos of the Danites, the allegedly murderous pack of villains that have populated unknown numbers of cheap books and nightmares ever since. As Ardis and Mike state in their introduction, “Nearly all of the anti-Mormon stereotypes of the nineteenth and twentieth centuries can be traced genealogically back to Eagle Plume, the White Avenger.”

In real life, the Danites were a bunch of overly-anxious men circa 1837-1838 who thought it might be useful to kill disaffected Mormons. The Danites believed these disaffected Mormons were responsible for the killings, rapes, and destruction committed by non-Mormons in Missouri. But Joseph Smith commanded these few to repent or in other words, turn the other cheek. There have been no Danites since 1838.

This alliteratively-titled volume features Buffalo Bill Cody as the hero, with such subtlely-named characters as “Satan’s Pet.” The primary villain is Danite leader, John Leigh, obviously based on John D. Lee. In real history, Lee was convicted of being responsible for the Mountain Meadows Massacre and was subsequently executed in 1877. The Doomed Dozen brings together all the standard anti-Mormon stereotypes in one place, with Buffalo Bill thrown in to save the day.

Frank Merriwell Among the Mormons; or, The Lost Tribes of Israel (1897)

The character Frank Merriwell was expressly created as a role model for boys: clean living, athletic, and brave. Frank Merriwell would survive the end of dime novels and go on to save the day in radio dramas, comic books, and motion pictures.

The villains in Frank Merriwell Among the Mormons are not mainstream Mormons, but a radical sect of Mormons living in the mountains, who have rejected the Manifesto. As Mike mentions in the Q&A, “Frank Merriwell points out that the rising generation of Mormons are good citizens who are opposed to polygamy. In 1897, in a dime novel, this amounts to something like high praise.”

The Bradys Among the Mormons; or, Secret Work in Salt Lake City (1903)

By 1903 the wilderness had been tamed, and dime novels turned from horse-riding heroics to detectives. The Bradys Among the Mormons was written after the election of Reed Smoot, a Mormon Apostle, to represent Utah in the US Senate. As sometimes happens after elections, opponents demanded an investigation. The Smoot Hearings went on for four years, filling the newspapers of the day with “every peculiarity of Mormonism, especially its polygamous family structure, ritual worship practices, “secret oaths,” open canon, economic communalism, and theocratic politics.”

The aspiring Mormon politician in The Bradys Among the Mormons is Mr. Joseph Smith Podmore, a Mormon who is courting the daughter of a sitting US Senator and planning to run for the Senate himself. The Bradys are called in to investigate, and soon uncover a secret world of Danites, tunnels, murder, and polygamy.

As I reflect on my past, I remember a time when I told a work colleague that I was getting married. With a look of dread, the man asked, “Is your fiancé Mormon?” When I said he was, my colleague replied with sorrow and may have wept, saying “You will never be saved now.” Reading these dime novels gives me perspective on why various people I have know had such strange ideas about Mormons and why they felt it was acceptable to be so impolite. And if you can suspend a feeling of deep outrage at the gross factual distortions contained in these books, you will likely have a great time reading the tales.