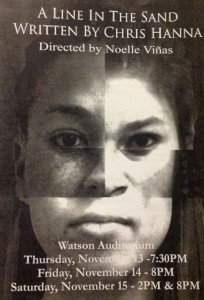 Last night our family attended a high school production of a new play, A Line in the Sand by Chris Hanna. The play tells the story of the Norfolk 17, black children who had petitioned to attend their neighborhood high schools in accordance with the 1954 Supreme Court decision in Brown v. Board of Education.

The State of Virginia decided to close the schools rather than admit black students. For months the children’s lives became polarized as the legal battles raged and individuals had to face the consequences of the resulting brinksmanship.

As with all high school productions, there was much to congratulate and much that could have been improved. The students had been encouraged to research the history of the situation, and the play had begun with comments from the perspective of the immediate aftermath of the black students being admitted to the white schools. In these brief statements, we were told that one of the students had been stabbed on her way to class, that she lay bleeding, while no one went to her aid. Unaware that this was not part of Chris Hanna’s original script, the members of my family waited in dread for the final scene which we presumed would show this confrontation.

However the play itself ended on a vaguely humorous scene of a black girl’s parents falling asleep the night before the landmark day when she would attend the white high school for the first time.

Perhaps if the play had been smoothly done, we would have been content with the knowledge we’d gained during the performance. Instead, we searched the internet from our seats, looking to find out what had really happened to the Norfolk 17.

We finally came across a series discussing Virginia’s policy of Massive Resistance, with a summary of the result when the Norfolk 17 began attending the white schools.

Despite the constant abuse, 16 of the black children completed their high school education within the white schools. The 17th, Delores Johnson, was stabbed while walking to class and ended up transferring to the black high school. While Delores may be the only one with physical scars, all the black children suffered severe emotional damage, including various forms of PTSD.

I couldn’t help contrasting the violent and bitter struggle for school integration with the joy almost all members of the Church reported when they were told of the 1978 revelation making the fullness of the priesthood available to all men, opening the temple ordinances to all families.

[Edited]In 1954 David O. McKay was said to have commissioned a study of the Priesthood Ban. The statement crafted under the administration of George Albert Smith had promised that at some future time the priesthood would be granted to all, but that the current ban was a matter of commandment. The 1954 study allegedly found that the ban was not based on doctrine, and therefore could be changed if President McKay felt the commandment had been lifted. However they also reported that it was clear the membership of the Church was not ready for such a change. 1

Likely sometime after 1954, David O. McKay was challenged about when blacks would receive the priesthood. Those familiar with President McKay report that he, of all men, would have been most pleased to lift the ban. 2 And yet his hand was stayed, much to his frustration.

Into the 1950s and beyond, the highest leadership in the Church was open and supportive of reaching out to all races, despite the policy. Chieko Okasaki told of how these high leaders (including Ezra Taft Benson) were pleased to enroll their children in her class, though there were small-minded bigots who had refused to allow their children to learn from a Japanese woman. In the case of my Chinese aunt, N. Eldon Tanner was specifically assigned to protect her when her marriage to a white Elder who had served in Taiwan caused her to be attacked and slandered. When my white mother became engaged to a Chinese man, Sterling W. Sill advised against the marriage, warning of the dangers when individuals from such different cultures marry (Elder Sill’s concerns were all validated in my parents’ lives). Yet when my parents persisted in seeking a marriage that was not yet legal under Utah law, the Church still issued them temple recommends and their marriage in Los Angeles was a cause for great rejoicing for all in their student community.

Finally in the time of Spencer W. Kimball, the Church was united in a desire to have the ban lifted. For all the leaders, it was a source of concern and distress. For individual members, the ban was an embarrassment. No one wished the ban to continue. All looked forward with anticipation to a day when all could participate openly in the blessings of the gospel, despite the silly tales that had grown up over time to explain the reason for the ban. 3

I can imagine a God who would insist the ban remain in place until we as a people had been sufficiently purified from our collective sins. I can imagine a God who wanted us to desire the removal of the ban with our whole hearts, to wish it removed as one might desire to remove a hair shirt, as one might desire to escape the tormentor’s lash. Only then could He entrust his beloved black children to our society. For me, this God would have us become purified in this one thing, that we might not scar our brothers and sisters the way the Norfolk 17 were scarred by their forced exposure to a reluctant white world.

The history of our past and the ban continues to serve as a hair shirt, to goad us to remain open, to remind us that we must not merely accept our brothers and sisters, but yearn for their deliverance.

Only as we live in accordance with such honest yearning will we remain pure and delightsome in His sight.