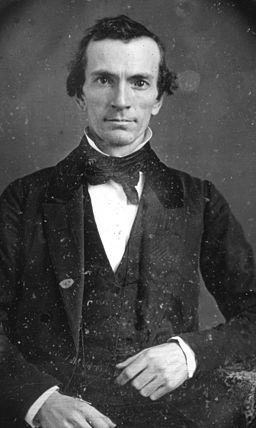 Oliver Cowdery was at Joseph Smith’s side for nearly a decade at the beginning of the restoration.

They started their association working together on the Book of Mormon starting in May 1829. Within days they reportedly received the Aaronic Priesthood from John the Baptist so they would have the proper authority to baptize one another.

Oliver Cowdery was also involved in the restoration of the Melchizedek Priesthood. 1

Oliver Cowdery would marry in 1832, becoming husband to Elizabeth Ann Whitmer. This made Oliver brother-in-law to all the witnesses of the Book of Mormon other than Joseph Smith’s relatives and Martin Harris. 2

Oliver Cowdery was at Joseph’s side on April 3, 1836, when the two reported receiving a glorious vision of Jesus Christ, Moses, Elias, and Elijah.

The visit of Malachi is described in D&C 110:

“Behold, the time has fully come, which was spoken of by the mouth of Malachi—testifying that he [Elijah] should be sent, before the great and dreadful day of the Lord come—

“Therefore, the keys of this dispensation are committed into your hands; and by this ye may know that the great and dreadful day of the Lord is near, even at the doors.”

It was apparently in the spring of 1836 that Joseph Smith covenanted with Fanny Alger. 3 If this occurred, the obvious officiant would have been Oliver Cowdery.

Sometime in the summer of 1836, Emma Smith allegedly became upset when she found Joseph with Fanny in a barn. The source of this report is Oliver Cowdery, who Joseph had supposedly called in to help calm Emma down. But Cowdery’s report of these matters would not be documented until 1838, over a year later.

Or Outrage that Joseph Interfered with Oliver’s Covenant with Annie Lyman?

An alternate version of events was recorded by Charles L. Walker in 1872, based on a sermon given by Brigham Young. 4 Walker wrote:

“…while Joseph and Oliver were translating the Book of Mormon, they had a revelation that the order of Patriarchal Marriag and the Sealing was right. Cowdery, according to Young, proposed to Smith, “Why don’t we go into the Order of Polygamy, and practice it as the ancients did? We know it is true, then why delay?” Smith warned that “the time has not yet come.” Ignoring the prophet’s counsel, “Oliver Cowdery took to wife Miss Annie Lyman, cousin to Geo A. Smith. From that time he went into darknes and lost the spirit. Annie Lyman is still alive, a witnes to these things…”

But Charles L. Walker joined the Church years after Cowdery’s death and wouldn’t have know the context well. Therefore Walker may have inappropriately conjoined the Book of Mormon translation with the Annie Lyman interaction.

If Walker had been viscerally aware that Oliver became estranged from Joseph Smith in 1838, he would know this later date was when Oliver Cowdery “went into darkness and lost the spirit.”

I propose a more knowledgeable person might have recorded Brigham’s sermon as follows:

“…while Joseph and Oliver were translating the Book of Mormon, they had a revelation that [plural marriage] was right. 5

“[After April 1836] Cowdery proposed to Smith, “Why don’t we go into the Order of Polygamy, and practice it as the ancients did? We know it is true, then why delay?” Smith warned that “the time has not yet come.”

“Ignoring the prophet’s counsel, Oliver Cowdery took to wife Miss [Mary] Annie Lyman, cousin to Geo A. Smith. From that time he went into darkness and lost the spirit.

“[George A. Smith tells me] [Mary] Annie Lyman [Rowland] is still alive, [and has confirmed that Oliver Cowdery sealed her to himself as a plural wife before Oliver’s apostasy in 1838.]”

Instead of reasoning from 1838, researchers for decades have been holding fast to the belief that Oliver covenanted with an Annie Lyman around 1829. But then they admitted that this was unlikely until 1831 while Joseph was working on the inspired translation of Genesis. Further research into Annie’s family then persuaded researchers that the date was likely 1833 or 1834. At which point some tried to tie this to obscure mentions of sin involving Oliver at that time.

But no one seems to have considered that the Annie Lyman who was cousin to George A. Smith was not born until February 1818. This would make her only eleven years old in the summer of 1829. On the other hand, Mary Ann Philomelia Lyman was eighteen years old, the same age as Fanny Alger, at the end of 1836.

Another factor is the location where Mary Ann Philomelia 6 Lyman [Rowland] spent the remainder of her adult life. She ends up marrying Jesse Dotson Rowland on March 21, 1839, in Ray County, Missouri. Ray County is where David Whitmer settled following the apostasies of 1838. Ray County is where Oliver Cowdery was in 1850, visiting with David Whitmer, his wife’s brother and fellow-witness to the Book of Mormon. It is possible Oliver hoped to win David back to the LDS faith, into which Oliver had be re-baptized in 1848. Unfortunately, Oliver’s 1850 illness led to his death and David Whitmer was never rebaptized into the LDS faith.

Oliver was clearly the most prominent of those who turned against Joseph Smith in 1838. Oliver was arguably the primary person of whom Joseph was thinking when he wrote the following:

37 That they may be conferred upon us, it is true; but when we undertake to cover our sins, or to gratify our pride, our vain ambition, or to exercise control or dominion or compulsion upon the souls of the children of men, in any degree of unrighteousness, behold, the heavens withdraw themselves; the Spirit of the Lord is grieved; and when it is withdrawn, Amen to the priesthood or the authority of that man.

38 Behold, ere he is aware, he is left unto himself, to kick against the pricks, to persecute the saints, and to fight against God.

Oliver had had the sealing power conferred upon him. But if we believe Brigham Young, Oliver had sought to do that which Joseph had forbidden for him, claiming that “the time was not yet come.”

It may well be that Joseph had claimed that it was specifically Oliver’s intent to unite with Annie Lyman that was inappropriate.

Joseph’s in-laws had already written him off as a loss. Therefore Joseph’s union with Fanny Alger did not alienate multiple members of the Mormon community, with the supposed impact on Emma largely inferred from Oliver’s angry accusations. Joseph appears to have won the Alger family over to see the covenant with their daughter as a blessing.

But Oliver’s in-laws were the Whitmers and Hiram Page. There is no reason to think Oliver spent time attempting to win them over. The brothers of Oliver’s first wife would find the idea of such a plural marriage repugnant. David Whitmer opposed the possibility of plural marriage to his deathbed. Nor is it clear the Lyman family was ready to see Oliver’s union with Mary Ann as a blessing.

This story of Annie Lyman is relatively new to me, so I welcome feedback if readers find I have significantly misunderstood the situation and sources.

[My thanks to Andrew Ehat for telling me of the Walker account.]

7 thoughts on “Oliver Cowdery and the New and Everlasting Covenant”