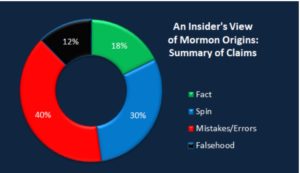 In the past I have talked about those who fall away from the Church, referring to them as akin to the layer (called ablative) of the space shuttle that is designed to wear away when the going gets rough. Not that anyone is pre-destined a prior to lose their belief, but that when we put ourselves in a dangerous place, breaking away is a higher risk.

This past week I’ve had the change to visit with relatives and we had time to talk at length. My uncle is well-known to various individuals of note. He went to high school with Carol Lynn Pearson and played basketball with her now-deceased husband, Gerald. He was counselor to Richard Bushman when Bushman was an Elder’s Quorum president. When he wished to bring his Chinese wife into America and needed a sponsor for her, he reached out to Mitt Romney.

As discussion drifted to my interest in early LDS history, I became aware that this uncle harbors deep antipathy to Joseph Smith and polygamy, largely based on his belief in Grant Palmer book, An Insider’s View of Mormon Origins, published in 2002 by Signature Books. As my uncle expounded on his views, I realized he had bought into a fun-house mirror view of the history I know so well. Curious, I purchased Palmer’s book, then found both an online history of Palmer’s eventual decision to leave the Mormon Church (circa 2010) and a detailed FairMormon analysis of Palmer’s claims.

Palmer’s book is a bit like “Letter to a CES Director,” only clothed in a more refined veneer of plausibility.

For those who have been affected by this book, I recommend you read the FairMormon analysis of Grant’s claims.

Grant wanted to believe that he was not creating a challenge to members of the Church, that because he continued to profess belief in Jesus Christ he should be allowed to remain in full fellowship with the Saints. And it may be true that the publicity associated with the Church discipline he faced exposed Palmer’s heterodox views to many more people (free publicity Signature Books was pleased to exploit).

If the God Mormons believe in and the associated afterlife is what really occurs, I imagine Grant Palmer is having a chance to re-evaluate the choices of his final decades. And as those particularly damaged by Palmer’s work join him in that afterlife, interesting conversations will transpire.

In the meantime, it is fascinating to see how people will use the power of their past associations with the Church to argue for their current belief that it is wrong. As for me, I’ve studied enough that I am not swayed. If you are facing similar challenges from loved ones, I wish I could help strengthen you. In the mean time, lean of Christ and those who have taken the time to study the weaknesses in the arguments flung at our heads.