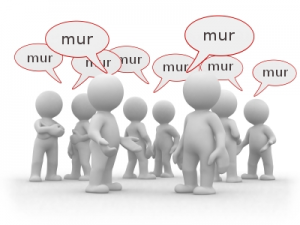 Every six months a General Conference comes and goes, and along with it the usual gripes from those who are not satisfied. That isn’t only non-Mormons who don’t believe in Prophets and Apostles, but some members of the Church. They will claim that the right words weren’t said, too much was asked of them, or the leadership just doesn’t understand. Whenever it is pointed out that the Lord is in charge and not them or their desires, they make accusations of heartlessness or lack of caring. Invariably they will insist that doing what they ask is a way to, “mourn with those that mourn; yea, and comfort those that stand in need of comfort,” (Mosiah 18:9) whether the requests are deserving or not. It becomes a spiritual extortion by pointing fingers at those who don’t agree with their concerns. Too often they confuse the emotional turmoil of mourning with the selfish sin of murmuring.

As was said on another mourning related discussion, “Mourning with those who mourn is an important Gospel principle, but like any Gospel principle, it can be distorted and used to serve incorrect (should I say “problematic” instead?) ends.” The mixing up of mourning for murmuring is more than a social misplacement of scriptural injunctions. In the past the Lord has become displeased enough that he condemned the whole of Israel for what amounts to ungrateful insolence.

Despite the traditional understanding of Israel’s 40 year wanderings, they were not without food and luxuries. They took with them, according to Exodus 12:38 , “flocks, and herds, even very much cattle,” with the large group of people. That wasn’t all that went with them as they took the spoils of Egypt, using the animals and supplies as in Exodus 29 to preform the rights and sacrifices of the Tabernacle. Worship consisted of sacrificing a young bullock and two rams, including a lamb in the morning and one in the evening every day. That didn’t count the private purifications using lambs or two young pigeons after childbirth. During the 40 years of wandering, as pointed out in Deuteronomy 2, they were never alone and at times allowed to do trade and commerce with other people. Yet, they still complained they didn’t have enough food.

The Lord heard Israel murmur and answered in Exodus 16:3-4 with a miracle:

3 And the children of Israel said unto them, Would to God we had died by the hand of the Lord in the land of Egypt, when we sat by the flesh pots, and when we did eat bread to the full; for ye have brought us forth into this wilderness, to kill this whole assembly with hunger.

4 Then said the Lord unto Moses, Behold, I will rain bread from heaven for you; and the people shall go out and gather a certain rate every day, that I may prove them, whether they will walk in my law, or no.

That was still not enough, because they wanted more meat. In verses 11-13 another miracle:

And the Lord spake unto Moses, saying,

12 I have heard the murmurings of the children of Israel: speak unto them, saying, At even ye shall eat flesh, and in the morning ye shall be filled with bread; and ye shall know that I am the Lord your God.

13 And it came to pass, that at even the quails came up, and covered the camp: and in the morning the dew lay round about the host.

With all that Israel had brought with them or was provided by the Lord, they were still unsatisfied. After so much long suffering the Lord in Numbers 21:6 had enough and sent fiery serpents to inflict them. Many died, although he provided a way to deliver them (vs. 8-9), “And the Lord said unto Moses, Make thee a fiery serpent, and set it upon a pole: and it shall come to pass, that every one that is bitten, when he looketh upon it, shall live. And Moses made a serpent of brass, and put it upon a pole, and it came to pass, that if a serpent had bitten any man, when he beheld the serpent of brass, he lived.” Even before this in Numbers 14:3-4 Israel feared the inhabitants of the land they were promised and murmured there was no way to defeat them. They were ready to return as slaves to Egypt, although realistically be slain there. The Lord in his wrath declares:

22 Because all those men which have seen my glory, and my miracles, which I did in Egypt and in the wilderness, and have tempted me now these ten times, and have not hearkened to my voice;

23 Surely they shall not see the land which I sware unto their fathers, neither shall any of them that provoked me see it:

24 But my servant Caleb, because he had another spirit with him, and hath followed me fully, him will I bring into the land whereinto he went; and his seed shall possess it.

Israel had murmured too much. No amount of blessings would satisfy them. Years of the Lord “mourning” with them by doing miracles was enough. They would not be allowed to enter into the land they were originally promised. Another generation had to wait for it to be fulfilled.

Elder H. Ross Workman, former member of the Quorum of the Seventy, said in his Doctrine and Covenants 101:43-62 referenced talk Beware of Murmuring:

Why did the servants fail to build the tower? The seeds of the disaster were planted by murmuring.

According to the Lord’s parable, murmuring consists of three steps, each leading to the next in a descending path to disobedience.

First, the servants began to question. They felt to exercise their own judgment upon the instruction given by their master. “What need hath my lord of this tower, seeing this is a time of peace?” they said (D&C 101:48). They questioned first in their own minds and then planted questions in the minds of others. Questioning came first.

Second, they began to rationalize and excuse themselves from doing what they had been instructed to do. They said: “Might not this money be given to the exchangers? For there is no need of these things” (D&C 101:49). Thus, they made an excuse for disobedience.

The third step inevitably follows: slothfulness in following the commandment of the Master. The parable says, “They became very slothful, and they hearkened not unto the commandments of their lord” (D&C 101:50). Thus, the stage was set for disaster.

God has blessed His children with prophets to instruct them in His ways and prepare them for eternal life. The ways of God are not easily understood by man. “For my thoughts are not your thoughts, neither are your ways my ways, saith the Lord” (Isa. 55:8). Obedience is essential to realize the blessings of the Lord, even if the purpose of the commandment is not understood.

Mourning is a serious emotional response that must be responded to with care and attention. Sometimes those who have a complaint are correct in calling out necessary improvements. Grecian converts in Acts 6:1-6 expressed concern that the Hebrews neglected the daily needs of their widows. The leadership of the Church who had other responsibilities sympathised and asked the membership to find people who could preform the requested duties. This was a great example of finding a way to help those in need.

Those who might have legitimate worries must be careful not to cross into murmuring territory. There are right times and reasons to express concerns. Likewise, inappropriate or disproportionate grumblings will result in lost testimonies and eventual cursing instead of blessing. This is expressed in 2 Corinthians 7:10, “For godly sorrow worketh repentance to salvation not to be repented of: but the sorrow of the world worketh death.” In Mormon 2:12-15, the prophet saw this firsthand when his people become blood thirsty warriors:

12 And it came to pass that when I, Mormon, saw their lamentation and their mourning and their sorrow before the Lord, my heart did begin to rejoice within me, knowing the mercies and the long-suffering of the Lord, therefore supposing that he would be merciful unto them that they would again become a righteous people.

13 But behold this my joy was vain, for their sorrowing was not unto repentance, because of the goodness of God; but it was rather the sorrowing of the damned, because the Lord would not always suffer them to take happiness in sin.

14 And they did not come unto Jesus with broken hearts and contrite spirits, but they did curse God, and wish to die. Nevertheless they would struggle with the sword for their lives.

15 And it came to pass that my sorrow did return unto me again, and I saw that the day of grace was passed with them, both temporally and spiritually; for I saw thousands of them hewn down in open rebellion against their God, and heaped up as dung upon the face of the land. And thus three hundred and forty and four years had passed away.

Most important is in what spirit does mourning and the need for comfort come from within our hearts. Does it exist because of a real loss of a loved one, loneliness, physical and mental distress? Is it an egotistical need or selfish desire to please the world or coveting what others have? The Lord will punish the wrong kind of mourning that turns into murmuring with the same intensity as committing other sins. He is not pleased with those, “who confess not his hand in all things, and obey not his commandments.” (Doctrine and Covenants 59:21). True answers to prayer and gaining of comfort comes by aligning our will to God’s and recognizing the blessings that do exist before seeking more.

25 thoughts on “Mourning With Those Who Mourn, Not Murmur”