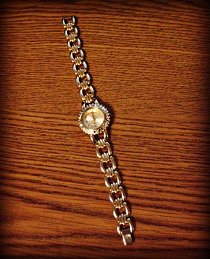 This post is done on behalf of Bonnie, the founder of the Real Intent.

My eyes darted across my dresser one last time as I rubbed frantically at my left wrist. Where was it?! I could not leave without it, but the clock on the wall was fairly shouting that I was going to break my word if I did not go right then. I would have to choose between wearing a watch and being on time. I set my teeth and left watchless.

We live one block from the church, but for months we’d been straggling in four different kinds of minutes-late. My children are teens who get themselves ready. I had no excuse and I knew it. I promised the Lord that I would make a priority of being on-time for the service that allows me to renew my baptismal covenant as a small way of honoring the great sacrifice it remembers.

But I couldn’t go without my watch.

So there I was, sitting in Sacrament Meeting rubbing my right hand around my left wrist absently. After the sacrament portion of the meeting, my youngest daughter got out my ‘grandma bag’ that I bring to church to entertain the small children who sit in the long pew with us, and there was a watch! It was my old gold one with crystals, permanently stuck at 12:00. That’s why it was in the grandma bag. I nudged her and told her to hand me the watch, which she did, thinking I had come up with some new way to use it for a toy. I put it on and breathed a deep sigh of relief.

“It doesn’t matter; it’s a watch,” I said firmly, and with considerably greater peace of mind. 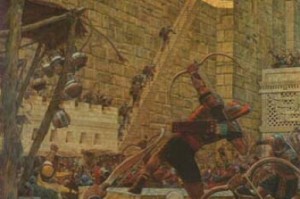 As I pondered the people of Zarahemla, who would reject a foreigner who stood on a wall to tell them that they weren’t paying attention to the truth they had, and about whom I would be teaching in a few minutes, I felt a sudden connection. As so often happens when I read about fools in the scriptures, I was them.

It’s far too easy to wear our religion comfortably and never look at it, to not be changed or motivated by it, to have it “on” but not have it directing our timetables and our activities. If it’s dead, it’s just an ornament, because a watch is meant to be more than an ornament. It’s a tool.

Religion is a tool to bring us to Christ. Do we check it? Do we make decisions by what it says? Does it help us be prepared?

I’ve watched this devotional, given by Elder Holland the same day as my watch lesson, several times in the last two weeks. I keep finding points that inspire me and they’ve been the best hours I’ve spent in some time. If you’re the sort who consults your watch, you’ll probably like it.

This forms the raison d’être for Real Intent, a new LDS magazine online. Published entirely by faithful LDS writers without advertising or sponsorship, Real Intent is entirely the work of a writer’s group intent on improving the conversation about and within the LDS faith online as we refine our discipleship exploring pragmatic issues of personal faith, strengthening families, and engaging in our communities.

In future posts we’ll explore “Everything Since Sunday” – a gospel discussion meant not to substitute for the vital worship and connection we get from our local congregation, but to expand that worship into our week, our conversations, our lives. Check out our Everything Since Sunday topics section in the lower left corner of the site when you’re looking for something specific.

It is time to do something more, to expand the conversation, to take it to a higher level. This is our effort to pay more attention to our watch, to let it set our priorities. We hope, as faithful readers at Millennial Star, you’ll join us. We look forward to what you’ll add to the conversation as well.