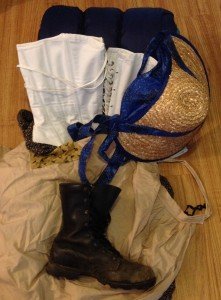 This weekend our stake held their fourth “trek” youth conference, of which members of my family have participated in three. This is my second trek, accompanying my daughter who is autistic.

Eldest daughter, as passionate about fiber arts as I am about the history of polygamy, decided we would be greatly benefited by participating in authentic period costume, including corsets. Now that I know what it is to wear one and how it shapes the body, I can see the corsets on all the pioneer women in pictures from the 1800s. Speaking for myself, my reaction went from “You have got to be kidding!” to “Not bad.”

The handcart trek experience is becoming one of the experiential touch points of being a Mormon young person. In contrast to all the intellectual hand wringing I see on the internet, the trek experience is down to earth and visceral. This is no simple lecture about how hard life was for the early Saints. It is days of sleeping on the hard ground, pushing and pulling a cart carrying your few possessions, not knowing ahead of time what will happen, how long the road will be, or what natural delights and perils await on the path ahead.

We had the chance to trek in the Northern Virginia countryside on a large cattle ranch. The real possible danger was underscored by the permission forms each participant (and/or their parents) had to sign in order to participate.

Handcart treks are typically held as a Youth Conference for the young people of an entire stake. Out west many stakes opt to recreate the trek experience at Devil’s Gate, site of the dramatic 1856 rescue of the Martin and Willie handcart companies, along with the Hodgett and Hunt Wagon companies. It was a great reunion of me and my old hiking boots which I tended to as the pair had clearly already worn out. After reading a guide on how do small boot repairs on ShoeAdviser.com, I successfully brought it to life again. Demand for the facilities at that site is so great that a stake can often only hold handcart trek once every six years, meaning any individual young person is likely to only experience trek one time. Elsewhere, stakes that are equipped to stage a handcart trek tend to do so once every four years.

The purpose of Youth Conference is to bring together the young men and young women in an extended weekend of focused time to build their character and testimonies, and strengthen the bonds between the individual young people.

Only ten companies of handcarts made the trek across the west to Utah. It was a desperate attempt to allow Saints to gather to Zion when economic resources were slim. The vast majority of pioneers traveled in wagon companies, either bought and purchased by the travelling pioneers themselves (up to 1860), or provided by the Saints already in Zion (from 1861 on, with the Down and Back Companies).

But though the handcart experience was not widespread among pioneers, it is iconic of the lengths to which the faithful would go to gather to the Zion where their children could be raised in the gospel, surrounded by like-minded Saints.

From a practical perspective, a handcart is the perfect size for a group of 10-12 young people to push and pull across the countryside, laden with the few possessions they need for a couple of days. There is no need for oxen or horses (or the skills required to successfully manage them).

The rules of the handcart are simple: Pull on the bar, push on the back. The extra bar attached to the axle is positioned in the front to pull up hills or on level ground and switched to the back to be pulled against to brake when traveling down hills. Above all, stay away from the wheels, which can rip and crush in 2015 just as easily as they could rip and crush in the 1850s.

One of the scenes most handcart treks will reenact is the crossing of the Sweetwater in the fall of 1856. The handcart companies – starving, caught in snow, and lingering at the edge of death, faced one last crossing of the freezing Sweetwater River. Had the rescuers not arrived, all the surviving handcart pioneers would have likely died from that final river crossing. But three of the rescuers spent the day in the icy river carrying the stricken pioneers across the river on their backs. These three were teenagers, George W. Grant, David P. Kimball, and C. Allen Huntington.

Each of these young rescuers suffered severe health problems as a result of their saving service that day, health problems that would ultimately cause each to die before his time.

In homage to the sacrifice of those three teenage boys, the young men participating in trek are given an opportunity to carry the other trek participants across a shallow river. In my experience, when this is an option rather than a requirement, most all the boys volunteer to carry over members of their party.

Another iconic feature of the pioneer experience was the large number of women who traveled without having a husband to help. Mary Fielding Smith is perhaps the best-known individual woman, insisting on traveling west after her husband Hyrum was murdered, despite the objections of her company leader, Cornelius Lott. There are also the wives of the 500 who joined the Mormon Battalion, who continued to Utah alone.

Of these, my ancestor Elvira Annie Cowles lost a wheel, and had to travel 10 miles on foot to fetch the blacksmith in the next company. Next, one of her animals died, and she took the yoke on her own shoulders to keep up with the company until someone provided her a replacement animal.

During trek, it is common for there to be a time when the young men and their gear are sent off to a different place. The handcarts, with a slightly lighter load, are then only manned by the young women. During this portion of the trek, it is often necessary for the young women to pull the handcarts up a hill. Sometimes a team of girls is unable to get their cart over the rocks and roots along the incline, and girls from either preceding or following carts will gather to their side, to assist as desired.

At other times when help is offered, a team will refuse, maintaining that they can do it without assistance.

In the treks I have participated in or heard about, the young men are witness, but are forbidden from directly assisting or even talking to the young women during the pull. The most they are permitted to do is fan the young women or place rocks or sticks behind the wagon wheels, to prevent the heavy load from slipping backward down the slope.

Food along the Trail

[If you were lucky, like us this past week, the trail was lined with bushes filled with ripe berries. We were able to gather cupfuls of raspberries and blackberries from the thorny bushes.]

Of course, fixing food usually depended on having heat. So the first task was to chop wood and start a fire. Once that was going, the ingredients for the meal could be prepared and placed in an appropriate cooking vessel. For our treks, each cart had a pair of dutch ovens, as well as other large pots for boiling water.

There’s nothing so good as food around a twilight fire after a hard day of travel and physical labor. I hear there are some trek experiences where one meal is inadequate, supposedly to give the youth an appreciation for the near starvation experienced by some companies. But I think wise stake leaders ensure that the youth don’t have too much reason to become “hangry.”

It goes without saying that there were no cell phones or tablets permitted during trek. The only electronic intrusions were the infrequent and harsh sounds of walkie talkies, conveying important details regarding escaped livestock or severe weather conditions.

Along the trail there was storytelling and singing. The young men traveling near our cart were exposed to the songs the young women sing at camp, many of the songs dealing with young men. This was particularly amusing during the women’s pull, when the young men couldn’t say anything.

Around dinner, the youth talk with one another, sharing the lore of teens and inventing new stories. In between the fanciful, the youth speak of the issues of their times, their thoughts about friends and loved ones who don’t understand the nature of God and the plan of salvation.

One of the things hardcart trek makes possible are miracles. In one of the more concrete examples from our past weekend, there was a young woman who honestly fears and hates bugs. Within a few moments of leaving the car at the drop-off site, she realized that the Northern Virginia countryside in midsummer is absolutely alive with insects. And so she said a short prayer, begging God to protect her from having to touch any bugs.

This young woman was with the first handcart to enter the woods where the women’s pull occurred. Other girls mentioned that, for the first several handcarts, the ticks were practically raining from the trees above (making my group very glad we were the last handcart). When I mentioned this, the young woman who had been with that first handcart was confused, for she hadn’t seen any ticks.

I could go on, but suffice it to say that there were plentiful opportunities for insects and humans to interact. And most of us came home with a goodly portion of evidence that we had been in nature.

Yet this young woman didn’t have a single bug bite. That was absolutely a miracle.

I don’t know of anyone who wishes they hadn’t gone on trek. Even my daughter who went on the first trek in Northern Virginia loved it, though they got lost until 1 am the first day and were only fed watery broth (and then had the chicken killing as an “experience”). The reason I went twice is because my autistic daughter absolutely wanted to repeat the experience. More than any other youth experience, I’ve observed that trek gives each individual a chance to test themselves and conquer, to work together as part of a team and to find friendship and companionship in an emotionally safe and supportive environment.