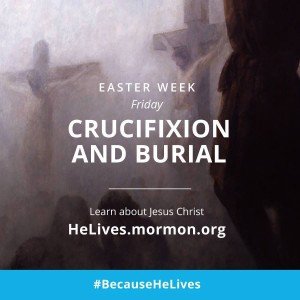 Each day this week, as part of the Church’s #BecauseHeLives Easter initiative, there will be a new question, meme, and/or video that members can share with their friends. Today is Friday of the Holy Week and the focus of today’s devotional is the Crucifixion and burial of Jesus Christ. You can find out more about Jesus Christ at http://mor.mn/2puvc.

Here in New Mexico kids are out of school today for Good Friday. I’m very glad, because it gave us some extra time this morning with our daily “scripture-picture”. Each morning over the course of this week, we have focused on the events of the Holy Week. This morning as I sat down next to my kids, my six year old asked if we were going to learn about Jesus on the cross today. Yes, kiddo, we sure are!

As you mature in the church, in the gospel and with your testimony, I think sometimes you forget, at least I do, that at one point, you learned the truths of the gospel and the timeline of religious history for the first time, and that first time learning something is a marvelous experience. This year, has been a watershed year for my son. He is old enough to start understanding and remembering the things we teach him. He sat with rapt attention this morning as I told him about how Christ was arrested, and taken away; how he was beaten and had a crown of thorns placed on his head, and how he prayed and suffered for us. My son was very concerned about the crown of thorns. He was very worried that it gave Christ a big headache. It probably did, along with every thing else he had to endure. My three year old son, was also very worried that Christ “had bleeded too much on the cross”. Yes, he did bleed too much, but it was for us that he bled.

As Christ hung on the cross he bled and suffered for us again, he showed patience and mercy for those around him. In Luke 23: 34 it reads, “Then said Jesus, Father, forgive them; for they know not what they do.” Today, in the world, as we look around on social media and in the news, we are anything but forgiving with each other. We all need to learn from Christ to forgive and to show mercy. Imagine what that would do for our society?

As Christ’s spirit left his body, the scriptures tell us that the veil of the temple was rent, and that there were storms, and earthquakes. The Book of Mormon in 3 Nephi 8: 19-21, tells us more about the destruction that happened,

“19 And it came to pass that when the thunderings, and the lightnings, and the storm, and the tempest, and the quakings of the earth did cease—for behold, they did last for about the space of three hours; and it was said by some that the time was greater; nevertheless, all these great and terrible things were done in about the space of three hours—and then behold, there was darkness upon the face of the land.

20 And it came to pass that there was thick darkness upon all the face of the land, insomuch that the inhabitants thereof who had not fallen could feel the vapor of darkness;

21 And there could be no light, because of the darkness, neither candles, neither torches; neither could there be fire kindled with their fine and exceedingly dry wood, so that there could not be any light at all; 22 And there was not any light seen, neither fire, nor glimmer, neither the sun, nor the moon, nor the stars, for so great were the mists of darkness which were upon the face of the land.”

Then Christ’s friends and followers removed him from the cross and took him to be buried. I know this must have been agonizing for them. My sons asked if he was resurrected right away. I said, no, Christ and his friends had to wait till Sunday for that to happen. And the resurrection did happen, and for that I am profoundly thankful.

4 thoughts on “Good Friday: The Crucifixion and Burial of Christ”