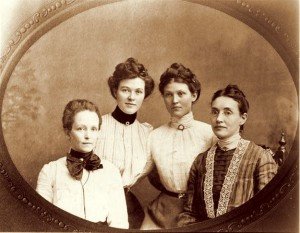 John W. Taylor was initially disfellowshipped in 1905/6 for marrying two daughters of Job Welling in 1901 (college-educated women, seen standing in the picture, who had been helping John’s two Farmington wives (sitting in the picture)). In 1909 John married again, wedding his secretary, Ellen Sandburg. In 1911 John was called before a disciplinary council.

It did not go well. He apparently yelled at his brethren of the first presidency and quorum of the twelve apostles, telling them it was none of their business, and so forth.

After John’s excommunication, he did not attack the Church. Yet the seriousness of his error, committed as a beloved apostle and son of a former prophet, meant that his reconciliation with the Church could not be a matter of a single year, or even of a decade or so. Not even after his death in 1916 were John’s blessings restored.

Kate is being offered the possibility to come back in as little as a year. I don’t in any way deny the pain she and others are feeling. Yet to wallow in that pain, to justify and complain and condemn, will not ease that pain, any more than scratching an itch promotes healing. Though I am sorrowful that Kate has been excommunicated, I have full faith that she will eventually be able to return to God. And I have that faith because of what I’ve seen happen with John W. Taylor.
_____________________________________________

It’s not just the cuddly kids and parents stuff either (though that is very important). It’s tying families together across time and space, in hopes that someday all mankind will have the choice to be linked together.

That’s what temples are for.

But for my grandmother and her siblings, that was an impossible dream. Their father, Mormon apostle John Whitaker Taylor, was famously excommunicated back in 1911 (for marrying too many women) 1. Thus he was barred from claiming his wives and children (36 of them) in the eternities.

It has caused untolled sorrow in this group of believing, faithful folks. The later wives, the ones who “caused” the schism between John W. Taylor and the church, wore shame like a brand. They never dared attend the temple together, lest the name Taylor alert suspicion. And yet they deeply loved their husband and refused to permit anything to stand between them and the possibility of eternal reunion with their husband.

Five of the wives were barred by US law from inheriting any of their husband’s estate when he died in 1916. Despite the resultant poverty and their large families, each of John’s widows received offers of marriage.

John’s wives never gave their children that possibility. Every one of these six beautiful (and they were beautiful) women went to their graves mourning their decades dead husband, poverty and loneliness notwithstanding.

As recently as 2009 descendants of John Whitaker Taylor and his brides were requesting permission to “seal” the family together, to no avail.

The record now shows John and his wives eternally and uniquely bound together (assuming, as always, that they so choose and God agrees). Not only that, but the sealing dates for two of the wives has been updated to reflect the day on which they were married in 1901, and their children are now shown as “born in the covenant.”

All thirty-six are gone now, the last one gone to her grave in 2004. But those who comforted John’s children and heard their cries know how much this means.

We who remain are left to contemplate this scripture, given to Joseph Smith in March of 1830, before the Church itself was even founded:

Woes shall go forth, weeping, wailing and gnashing of teeth…

Nevertheless, it is not written that there shall be no end to this torment, but it is written endless torment… that it might work upon the hearts of the children of men, altogether for my name’s glory.

Behold, I am endless, and the punishment which is given from my hand is endless punishment, for Endless is my name. 2

For the descendants of John Whitaker Taylor the torment of separation is now over. All is knit back together. The family can be at peace.