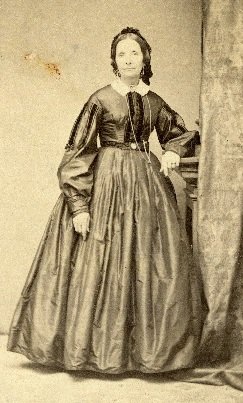 BYU-I professor Andrea Radke-Moss has come forward with an account that Eliza R. Snow was gang-raped by eight Missouri men.

The original account was recorded in the 1930s by Alice Merrill [Horne] (b. 1868), grand-daughter of Bathsheba Wilson Bigler [Smith] (b. 1822) apparently based on discussions of former times shared in the 1880s, when Alice was a teen or pre-teen.

According to the story in the Salt Lake Tribune, Eliza was raped in Missouri circa 1838 by 8 men. Andrea Radke-Moss asserted that due to the rape, Eliza was subsequently infertile.

Why I Hesitate to Wholly Accept this Account as Reported

I have no doubt that someone was gang-raped by eight men from Missouri. And I don’t have any hesitation in considering that such violence could have been committed against Eliza R. Snow.

However, we are talking about a record made decades after both the primary subject (Eliza R. Snow) and the raconteuse (Bathsheba W. Bigler [Smith]) were dead and unable to clarify. The honored lady making the record had been a mere teenager at the time the confidence was shared.

Bathsheba [Smith] was herself an unmarried teen at the time of the reported rape. Thus Bathsheba’s awareness of the rape was likely based on oral history from Eliza R. Snow decades after the event.

Hence we have at least two opportunities for oral transmission of a late recollection to become corrupted.

Regarding the assertion that Eliza R. Snow was necessarily infertile as a result of the rape, we must consider that Eliza’s window to conceive was limited. The earliest point (other than the reported rape) when Eliza might have become pregnant would be 1842, when Eliza was 38 years old. This is the year when she covenanted with Joseph Smith. 1842 is also the year when she wrote about innocence being taken side by side and face to face by a vile wretch, presumably referring to Dr. John Bennett or one of his strikers.

There are also the stories indicating that Eliza was pregnant and lost the child. The most credible is the account originating with Charles C. Rich, who reportedly saw the fall Eliza R. Snow suffered which precipitated the reported loss of her child.

Though many scholars have dismissed the possibility that Eliza could have been pregnant as indicated in the oral history traced back to Charles C. Rich, their reasons for dismissing the possibility are based on the fact that the reported event could not have occurred in February 1843 at either the Smith Homestead or the Mansion House. However Eliza R. Snow’s own contemporary poetry hints the fall and miscarriage, if they occurred, took place in November 1842.

Thus I am curious to know what Alice wrote that leads Andrea Radke-Moss to assert that Eliza was rendered infertile by the reported gang rape.

If Eliza was not the Victim, Who Was?

I absolutely don’t doubt that a gang rape occurred, perpetrated by eight men from Missouri. The question is why, if the victim wasn’t Eliza, might someone have misunderstood who was attacked.

Most people don’t know about Marietta Rosetta Carter [Holmes], a woman who died in August 1840 in Nauvoo. A band of men from Missouri came up the river to Nauvoo. In the intense storm that hit, they ended up at the cabin owned by Jonathan Harriman Holmes. When they departed, Marietta was fatally wounded and the house had been set on fire. Marietta died within hours of the attack. Marietta’s infant child also died, though the child lingered for a month after the attack.

In 1842 Jonathan and Eliza became close. In September 1842 a discussion of the resurrection prompted Eliza to write a poem dedicated to Jonathan. As originally formulated, the poem appears to have been celebrating the eventual union of Jonathan and the deceased Marietta. Celestial marriage at the time was a matter of great secrecy, suggesting that Eliza was in a privileged position. I have suggested that Jonathan Harriman Holmes may have been asked to serve as pretend husband to a possibly pregnant Eliza. We see in the case of Joseph C. Kingsbury that a man accepting the duty of sheltering a woman as a pretend husband was associated in that early period with the man being granted the privilege of being sealed in eternity to a deceased wife.

Reports from those who heard the tale directly from Jonathan Harriman Holmes suggest that his December 1842 marriage to Elvira Annie Cowles was initially a pretend marriage that was not consummated until after the death of Joseph Smith. In particular, the account of John Fish Wright (delivered to LDS Church headquarters by William Duggan Wright) indicates Jonathan was willing to serve as Elvira’s pretend husband if she would have him, suggesting that there was another who had not ultimately been willing to have him.

Whether Jonathan was mere friend or intended husband, Eliza would have become familiar with the conditions leading to Marietta’s death, conditions that almost certainly involved the same sort of gang rape Alice Merrill [Horne] reported against Eliza R. Snow.

Ultimately Jonathan Harriman Holmes ended up as the husband of Elvira Annie Cowles, and the poem, as modified, was published in December 1842 as a celebration of the union of Eliza R. Snow’s two friends. In February 1843 Eliza R. Snow moved from the Smith Homestead two blocks up Water Street to the home of Jonathan Harriman Holmes and Elvira Annie Cowles. Eliza would live in the Holmes household until her departure from Nauvoo circa September 1843.

Thus I see it as plausible that Eliza Snow might subsequently describe of a terrible rape of a woman who lived on the same property she lived at in terms that Bathsheba might have misunderstood as being a rape of Eliza. Or Bathsheba, in recounting the tale of the terrible rape, might have left young Alice with the impression that Eliza herself was the victim of the rape.

Ultimately, the tale recorded my Alice Merrill [Horne] indicates that there was an horrific rape perpetrated against either Eliza R. Snow or someone she cared about so deeply as to permit a second-hand reporter to identify Eliza R. Snow as the victim.

I reject the assertion that the reported rape rendered Eliza infertile due to conflicting testimony and lack of primary sources.

I am suspicious of the assertion that the rape was perpetrated against Eliza herself because there is a known attack likely involving gang rape that killed another woman, a woman close to Eliza through co-housing with the woman’s surviving widower. Some of Eliza’s 1842 poetry seems inconsistent with suffering an egregious rape in earlier years. However I consider the rape of Eliza R. Snow as reported by Alice Merrill [Horne] a possibility.

34 thoughts on “Eliza and Missouri”