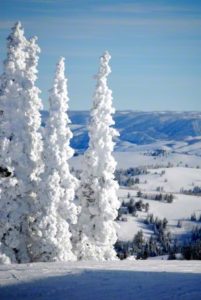 Many of the Christmas traditions we enjoy in America come from Germany. This is partly due to the fact the Prince Albert, the husband of Queen Victoria was German, and he brought with him his traditions. Albert and Victoria were trend setters. The German influence is also from the large numbers of German immigrants to the United States in the mid to late 1800s. My brother served his mission in Wisconsin, and said that you were as likely to hear German spoken as you were to hear English in some areas he was in. We grew up with German traditions in our home as our cute little (4 feet 9 inches) Grandma Gold was from Thuringa — the most German part of Germany. Dad also served his mission in Germany and loved to share fun traditions with us. We had a big red advent caledar on the wall with little charms to pin on a felt Christmas tree, yes we had the little chocolate door Advent calendars too (yum!). On December 5th we’d leave one shoe out for Sankt Nikolas to come and treat us, or leave a lump of coal the next day on Sankt Nikolas Tag. There was also fun treats like stollen and Lebkucken to eat. The greatest of German contributions to Christmas is the tradition of the Christmas tree. Dad used to tell us how when he was on his mission the Germans still were using real candles on their trees and how they’d only light the candles on Christmas Eve, so as not to burn the house down. I love German Christmas!

Lo, How A Rose Er’Blooming — I love this song because it talks about Christ coming from the lineage of Jesse, which is found in Matthew 1. “Boaz begat Obed of Ruth; and Obed begat Jesse; And Jesse begat David the king.” A variation of this hymn is called “The Noble Stem of Jesse”.

In Dulci Jubilo — Good Christian Men Rejoice. This song is interesting, in that you can find it sung in Latin (Catholic version), German (Lutheran Version), and English.

Still, Still, Still. Is an Austrian carol from the Saltzburg region. This is another lullaby that Mary sings to the Baby Jesus.

Silent Night. This, perhaps, is the most well known German carol — and it’s actually Austrian. The story behind it’s creation is quite miraculous. Click HERE to see a quick video about how Silent Night came to be. This year the song turns 200 years old.

1 thought on “Christmas Music: Songs from Germany and Austria”