Normally I do book reviews for non-fiction, and primarily for LDS focused books. However, I saw that Rachael Eliker*, a LDS friend of mine, wrote a teenage dystopian novel. I was interested in checking it out, and sharing my findings with MStar, where I know there are many people who enjoy good fiction. 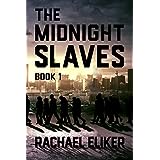 Imagine living in a perfect world risen from the ashes of global warfare. Everyone lives in New Haven, a city that has a perfect set of rules, the best of schools, great technology, and even robots that quietly clean your home as you sleep in your automated sleep pod.

It seems that every perfect world has a hidden secret, and New Haven is no different. When Jude, a promising young high schooler with a penchant for art, wonders what the cleaning androids look like, he is shocked to find out the real secret.

Midnight Slaves draws Jude into a hidden world of people used as chattel by the powers that be in New Haven. He struggles, as do others that learn of the secret, to decide between the comforts of continuing the lifestyle of New Haven, or attempt a coup to free those that are kept in servitude.

Midnight Slaves is well written with descriptions of people, animals and places flowing easily through its pages. The dialogue is natural and convincing.  The characters are believable and have a good depth of character developed. It is written with the modern reader in mind, lots of action and interaction. It definitely kept me engaged through the book with strong dialogue and action.  It is not a Tolkien novel of yesteryear that insists on using 10 pages to describe a meadow (there is nothing wrong with this, as I grew up reading and loving Tolkien’s world building).

There were just a few small issues that I had with the writing. Eliker notes frequently the poverty and deprivation the slaves live in, yet one of the slaves owns two horses, and others go into the local market where gold and silver jewelry are being sold. We also see some questions answered by a person-in-the-know, rather than allowing important facts and past events unravel naturally. Some of these things are told, rather than discovered by the characters and readers together.

For a first attempt at a dystopian teenage novel, Rachael’s offering is well worth the read. It is an engaging story, as it introduces us to two civilizations and the conflict that rages underneath the surface, bracing to explode at any moment.  I look forward to seeing the next volumes in this series.

*Rachael Eliker is mother of 4 children. She and her husband now live near Indianapolis, where they live on some acreage with 2 horses, chickens, cats, and whatever other animals interest them. Their home is an old, rustic (meaning: old and broken down) home that they have been fixing up over the last few years. She’s written a series of fictional books on horse racing previously. She has an active blog on homesteading at: http://therehomesteaders.blogspot.com/

All of her books are available for purchase on Amazon: https://www.amazon.com/s/ref=nb_sb_noss?url=search-alias%3Daps&field-keywords=rachael+eliker