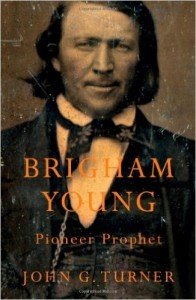 During his life, Brigham Young was among the most hated and feared men. Even some of those who supported him didn’t always get along with his irascible personality. National newspapers often portrayed him as a portly womanizer on the verge of destroying the progress of a modernizing civilization. International opinion agreed, although they saw him as the result of an upstart and untamed United States. The Mormons, along with Brigham Young, were seen as a force to be reckoned with or an unspecified moral doom would be the result. Many generations later he is still mocked and derided with the same images started in Eastern newspapers. Among current Mormons his image is rough, but strong as his statues in Utah. Both believers and detractors have made him into an legendary icon of opposing saint and sinner visions.

The biographer John G. Turner hoped with his book to slice through the competing images of a man who was either a hero who built half the Western U.S., or committed every crime imaginable. Like most things Mormon it wouldn’t be an easy task. Turner believed Stanley P. Hirshson’s The Lion of the Lord relied too heavily on Eastern newspaper accounts, and Leonard J. Arrington’s Brigham Young: American Moses slanted too positive as a loyal follower of the religion. He wanted to use more first hand accounts and reminiscences to build a better biography that accepted both the good and the bad about the man. With some reservations the book succeeded.

Stylistically it reads almost like a companion to Richard L. Bushman’s Joseph Smith: Rough Stone Rolling by giving the participants benefit of the doubt through their own words. Nothing seems to have been written to try and undermine or explain away spiritual experiences. There are some differences in subject treatment. Turner doesn’t focus as much on the theological developments and teachings, except where there is a direct connection to events. He uses theology to try and understand why Brigham Young or his followers behaved a certain way, while Bushman sometimes went off on a theological or philosophical tangent. In no way does this take away from the whole of the book, but sometimes it can feel like unexplored gaps remain. Considering that the biographer is a non-Mormon it probably is for the best. Even if he has a decent and mostly unobjectionable understanding of Mormon theology. Very few Mormon readers should be offended by doctrinal treatments, although certainly have a few disagreements with interpretations.

Considering the use of personal journals and reminiscence without much criticism, the first half of the book could have been written by a competent Mormon biographer. The biography starts out describing Brigham Young’s grandparents, parents, and then his own birth and life as a young man. It was a rather typical treatment that could be done for any person of interest. Nothing remarkable is told that would give away his future destiny. The known history of Brigham Young receiving The Book of Mormon from family members, his conversion, and eventual first meeting with Joseph Smith Jr. is told direct and without incredulity. In fact, any spiritual experience is allowed to stand on its own for the reader to decide to believe or not. If it happened or not is besides the point compared to what it meant for the person’s directly involved. Probably the most unexpected moments were when critical opinions were challenged by the inclusion of others. As an example, a contemporary former Mormon was quoted as saying the Kirtland Temple visions were inspired by heavy drinking. This was followed by a quote from a response by another former Mormon who said there wasn’t enough drinking to account for the spiritual events. It was even noted that the same was said in the Bible about Pentecost. This wouldn’t be the only time a pseudo-apologetic stance would be taken.

Despite the occasional foray into sympathetic treatments, the biography paints a far from perfect picture of Brigham Young or the Mormons. The book is not for those who are easily troubled by messy history or hold leaders of the Church on high pedestals. The Mormons are not always seen as innocent bystanders whose neighbors do everything bad and they nothing. Sometimes the Mormons apparently did some vigilantism of their own by burning down a few houses, or run people off land. In return, the neighbors did far worse not equal to a few crimes that the law could have handled if there was fair treatment. Brigham Young is not represented without his own tyrannical activities during the Utah years of leadership. Nowhere is the “Danites” or “Avenging Angels” mentioned as organized culprits ready to do Joseph Smith’s or Brigham Young’s bidding, but a few Mormons took it into their own hands to mete out frontier or religious justice. Instead of chastisement and excommunication, Brigham Young is often quoted that he didn’t approve and yet wouldn’t disagree with what happened after the fact. The biography does assert that at least a few executions or physical abuses were ordered by Brigham Young for extra-legal reasons. None were done directly by his own hand.

Of course, mention of Mormons and violence could not go without a discussion of the Mountain Meadows Massacre. This is yet another instance where there is an insistence Brigham Young had no direct hand in what happened. The opinion of those then and now that put the order to kill an immigrant caravan directly on him is brought up and quickly dismissed. Yet, his war-like rhetoric preparing for an invasion by U.S. forces possibly created a circumstance where a massacre became inevitable either from or toward the Mormons. Once it was done, the lack of actions by Brigham Young to bring those involved to justice or even Church discipline is seen as accessory after the fact, or at least approval. It is left open the possibility he was afraid doing anything would cause more trouble within and outside than covering it up, although a poor excuse. He decided punishments or pardons; and there were more guilty parties than John D. Lee who was the only one executed for the crime.

The reason for harshness toward his enemies is explained by the murder of Joseph Smith and the following turmoil. Turner continually brings up the theory that Brigham Young was afraid of the same fate, and would do anything to avoid an early violent death. He is quoted as saying that if it came to it, he would run away and go into hiding with or without Mormons following him. Although a man who didn’t like to be told what to do, during his leadership he demanded obedience and loyalty. He saw how trusting and forgiving Joseph Smith could be and how it got him killed by apostates. Because of that, almost any opposition was quickly trampled in public even among the closest associates. That caused rifts between him and other Church leaders, but they respected him for more congenial treatment in private.

Polygamy is treated much more as a religious devotion than deviance. Some abuses are noted, and there is a fascination with shared husbands. Still, the practice is presented as an extension of religious beliefs associated with building dynasties. The women are no more or less enthusiastic as a whole to be part of the marriage unions. Especially after public notice, some women begged and succeeded in becoming part of Brigham Young’s family. They saw within him a chance to be an influential member of Mormon society. There were still hardships, jealousies, and divorces to strain the institution. But, it also gave opportunities for independence and personal growth. Regardless of the moral or emotional questions, the idea woman were slaves to men’s appetite is disregarded as mostly untrue and sensational. A disgruntled woman could leave the marriage with as much difficulty as any monogamous relationship.

Unlike many discussions of the United Order where it was a success story that became a failed experiment, in the biography it never worked. The more Brigham Young tried to make it work, the more it failed. When he was around the Mormons put up a good front. Once he left for other places during his travels, the community went back to the usual way of doing business. He became frustrated no one seemed to be trying and as usual blamed his closest associates. They silently took his criticism and shrugged their shoulders. It was one of his biggest regrets that the United Order couldn’t get off the ground, although it produced the first and longest running Western co-operative retails knows as Z.C.M.I. There were too many poor who saw prosperity opportunities in other ways.

The vastness of topics covered by this book is too much to review or go over in a short space. Once the book enters Utah it becomes a more harsh treatment of Brigham Young. That doesn’t mean the soft and religious aspects of the man are ignored. They just become more spread out as his leadership responsibilities expand and he becomes a public figure. That is more than can be said about other biographies that see him as an oddity or cruel despot. To reiterate, the book is not for those who have a nascent faith in the Church or simplified understanding of its history. It can be absolutely as shocking as Brigham was for people in his own lifetime. For those who are less prone to becoming upset by unfamiliar aspects of Mormonism, it is a fascinating look at a man who is as controversial now as he was then. In fact, the reader might come away appreciative of this prophet’s spirituality and theological knowledge. For those who believe that corporate leadership replaced spiritual charisma and miracles during the early 20th Century, Turner claims it was Brigham Young who changed the leadership style. It would have been nice to read more about how today’s Mormonism as implied by the epilogue was shaped by the prophet, but that subject was hardly covered. There is enough for anyone to decide for themselves.