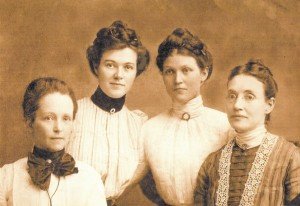 In light of the recent discussions about Joseph Smith having many wives and the gender issues survey, I think it’s not inappropriate to bring up the impact beliefs about polygamy have had on the way men and women behave towards one another in the Church.

One thing that I have found quite striking in my discussions with Mormon men about Joseph’s polygamy is the large number who cannot wrap their minds around a Joseph who might have remained physically faithful to Emma, or at the very least didn’t go to bed with every woman he could corner into having sex.

When I talk about this to non-Mormons, they get the implications of the small number of children and the fact the DNA data fails to prove any of the children were engendered by Joseph. They get the idea that there wasn’t effective birth control in 1840.

But Mormon men, in particular, are very invested in a Joseph who was sexual in his plural marriages. Why? Why is my hypothesis on this point treated with derision by some Mormon males who have studied polygamy? What does the “traditional” view of Joseph do for them that they are so invested in protecting it?

The traditional view of Joseph gives us a man so intent on obeying God’s commandment that he deceived his wife and kept her out of his confidence. Prior scholars would have you believe that Joseph went around procuring wives even while Emma was openly preaching virtue, that Emma was preaching virtue in direct opposition to Joseph’s behaviors.

Yet this version of Joseph is absolutely not the only way to interpret the data. I would argue that only a terribly sloppy reading of the historical data can possibly lead to such a distorted image of Joseph.

Frankly, I think the thing that would do the most to ameliorate inappropriate behavior between members of the separate genders would be to critically examine the history that we have been brought up to accept. Of course, that would be part of why I have been blogging about these matters for the past year.

What are ways that relations between the genders have improved greatly in recent times with respect to Church? What are the factors to which you attribute the improvements?

PS – The picture shows the four plural wives of John W. Taylor in 1901. That’s some kind of chutzpah. At a time when everyone else was creeping around in hiding, Taylor arranges for his plural wives to participate in a photo shoot. Sweet great-grandpa – that’s why they had to excommunicate you.

48 thoughts on “Another Approach to Addressing Gender Concerns”