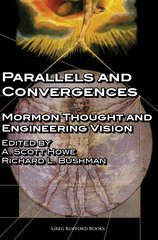 The book was much of what I was hoping for. Let me just say that unlike my esteemed colleague at M*, Ivan Wolfe, who also reviewed the book, I am a huge fan of speculative theology, especially speculative ways to work out the points of conflict between our current best scientific theories and our current best theological theories. Or, at least I’m a big fan if it’s not being presented as doctrinal fact, which this book never does.

I remember a Home Teacher coming over to our house when I was a child that, for some reason I can’t remember, gave us a lesson on the stars. I guess he was just interested and wanted to share. Back then standardized teaching was not as common and one could go wild on just about any topic. He spoke of the eventual heat death of the universe. I asked my father about that afterwards and my father’s simple answer was “God can change things so that there is no heat death.” As a child, that was as good an answer as any.

What I had actually been introduced to was two different ways in which Mormon doctrine can be interpreted. One way is that of my father’s. He simply accepts on faith that God controls the laws of the universe and so we can pretty much ignore factors like heat death as they can be rewritten at God’s whim.

The other approach is to see God as a “being who… gained His power and achieved perfection through obedience to laws.” (p. 93)

Thanks to the speculations of our 19th Century Mormon Ancestors, these two points of views intermingle in Mormon Thought to such a degree that it’s often impossible to tease them apart. This book falls firmly into the later camp, proposing various ways to interpret Mormon doctrine in a strongly naturalistic vein. Yet it does so humbly, always admitting that they have no answers yet, but are just exploring.

The Problems of the Spirit

One of my favorite topics from the book is the attempts to come up with a model for what spirit is. This is a challenging topic and Adam Davis, in his essay called Models of Spirit Matter, goes over several proposed models and the issues that exist with each. For example, what he calls the Mirror Model is a spirit world that “inhabits a spirit planet that basically sits on top of our own plant.” (p. 7) This sounds good in principle, but it actually presents an overwhelming challenge to existing physics. Consider how planets are formed according to our current understanding of physics. The Mirror Model has a significant explanation gap in that it does not explain why a spirit world would just happen to sit on top of our own world and just happens to travel around the sun at exactly the same speed as our world.

It’s tempting to try to ‘fix’ this problem by claiming that spirit matter must be attracted by the same forces as regular matter. Under this theory the spirit world is held in place by the force of gravity, just like we are. But this ‘fix’ creates a new significant explanation gap. Why can’t we then detect the spirit world since it too must exert gravity? We should be able to measure it via our current instruments.

Several other models are considered in turn. By the end of the essay Davis has basically shown that all the proposed models have significant issues. But this is the part I love about the book. David ends by expressing his optimize that despite these issues, we can and will eventually come up with a coherent model of the spirit world. Davis takes serious the doctrines of the Church and is exploring ways to reconcile physics and the doctrine of spirit matter. He knows he can’t resolve the issues today, but by exploring the issues he is working towards ways to resolve the problems.

This strikes me as the only legitimate way to treat religious doctrine: as legitimate basis for future observation. After all, if a spirit can influence our bodies in any meaningful way, then by definition it must be in some sense physical. (D&C 131:7) For ‘physical’ really means nothing more than ‘able to influence via forces.’ Spirits can either influence our bodies by some means (i.e. they contain something that can rightly be called a force) or they cannot and they have no relevance to us at all. There is no real middle ground here. Therefore spirit must be in some sense material. QED.

But he doesn’t just say (as too many do) “I can’t come up with a way to make this work, so it must be impossible.” He recognizes that all models start out this way, contradictory and problematic. (Oh that John Dehlin understood this point of rational thought!) So he sees little issue with exploring the issues and addressing them head on.

Scott Howe follows Davis with his own proposed model for spirit based on the idea of ‘primitive intelligences’ that are formed together as building blocks of personality. In addition he takes such passages as D&C 84:45, 93:29, 36 literally and notices that a reoccurring theme in these passages is that light is the basis for both truth and intelligences. He then explores these two thoughts and notices that there is a sense in which this is already literally true in modern physics.

Consider, for example, that all living things utilize biochemical signals to live. These signals exchange messages via photons which, and we know, is actually a package of light. So literally ‘intelligence’ (and all organic life for that matter) is a form of light.

Going a step further, he points out that the existence of all objects in our universe is actually a gigantic computation. For example, a simple rock actually does 10^45 computations per second essentially calculating its existence. It then ‘transmits’ the truth about itself to all our senses using photons, or in other words light. So in fact ‘truth’ is also deeply intertwined with light.

Though I am not sure how much I agree with many of Howe’s conclusions (often for the very reasons Davis explains) I find this an exceptional insight. And again, it’s a case of taking Mormon theology seriously as an explanation of the world and then exploring how to integrate it with our other explanations.

The right sort of poppycock indeed! I can think of no higher praise.

Objective Morality and the Second Law of Thermodynamics

The book continues with these patterns throughout. It consistently takes Mormon scripture and doctrine seriously and then makes conjectures as to how to interpret them in a scientific worldview. It then points out its own failures and looks towards a future improved conjecture.

Perhaps my favorite essay from the book as a rather serious (and chillingly good) attempt by Scott Howe to define morality in wholly lawful and naturalistic terms. As I’ve pointed out in my own posts on the subject (see here and here plus I have a future summary coming soon) defining morality naturalistically has proven problematic. And indeed, citing Popperian epistemology (and some would also claim also Occam’s razor, though its unnecessary here) the best naturalistic explanation of morality right now is that morality is just a delusion that happens to have survival value.

Essentially Howe gets past long since debunked attempts (and also here) to define morality as not causing harm and instead defines a moral choice as one that opens up future opportunities rather than closing them down. (See 2 Nephi 2:27) Morality is then really the choice that reduces the long term negative consequences of our actions and is based on restraint rather than lack of it. (p. 96)

This insight now found, he then demonstrates that we can then, in theory, measure morality just like we can measure any type of entropy. Though this theory is still to computationally primitive at this point, one can easily see how this approach could give way to a fully computational understanding of morality.

However, if I had one criticism of Howe’s approach, it would be this: doesn’t the second law of thermodynamics say that entropy must always increase overall? And if so, does that not suggest that we actually live in literally an evil universe? (Lovecraftianism rears its ugly head again.) So Howe’s model, while intriguing, is insufficient on its own without some means of interpreting the second law of thermodynamics as not merely saying that the universe is going to one day quash all goodness out of reality without the slight hope of goodness winning out in the end.

But again, we see how the book takes a Mormon doctrinal insight and runs with it and comes up with starling conjectures based on those insights. Are they correct? Probably not a chance! But this is the way knowledge is developed folks!

I was asked by Kofford books to not give away too much of the contents of the book. If I had my choice I’d take each essay and summarize it and then interact critically with it. But I hope the above examples give you enough flavor of what to expect from the book and give a good explanation as to why I find their approach spot on for how to take religion seriously as an explanation of reality.

15 thoughts on “A Review of Parallels and Convergences: Mormon Thought and Engineering Vision”