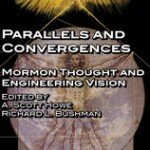 I should have hated this book.  While I don’t mind the occasional theological speculation done in a private setting, I generally do not enjoy speculation on “deep” matters of the gospel.  Yet this book, which contains a lot of very deep speculation into many, many theological matters related to the latter-day gospel, won me over.

Not that I agree with any of the authors on any particular subject.  However, the essays in this book (culled from a conference held at the Claremont Graduate University in 2009) come across as very humble.  While various authors present their views in varying degrees of forthrightness, each one maintains an attitude of “I could be totally wrong, but based on what I know, here is my best idea.”

Overall, the essays have a theme of (as the subtitle states) “Mormon Thought and Engineering Vision.”  However, individually they cover the gamut from Transhumanism to Quantum Physics and Philosophy of the Mind.  Essays deal with whether “light” can be considered “spirit matter” and how that would affect our understanding of the gospel, whether Mormonism helps deal with the apparent contradiction between free will and materialism, and whether God can be considered an Engineer (this latter essay I found to be the best, as even if one does not accept it on a literal level, it works wonderfully as a devotional analogy).

I personally have very little sympathy for Transhumanism and yet I found the chapters on that subject the most fascinating.  They didn’t win me over (or even nudge me), but the presentation was clear, concise, and creative.

Interestingly, the subject covered in this volume I have the most sympathy for (the Gaia hypothesis) left me somewhat cold.

Not being a scientist, I also appreciated that each essay seemed aimed at a more general audience.  Though not every scientific principle was explained, the more difficult concepts received clear explanations.  If I had a complaint, it might be on this front – several essays felt as if they had so much explanation of the basic concepts that the main point of the essay came across as almost an afterthought.

Overall, however, as long as these essays are taken in the humble spirit they were offered and not taken as the final (or near final) word on these subjects, any reader will (even if they think some of the speculation, as I did, was somewhat misguided) find something worthwhile in this book.