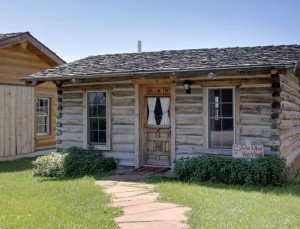 When we visit Nauvoo, our home away from home is the Van Fleet cabin, one of the authentic log cabins off Mulholland Street, a few blocks east of the Nauvoo temple.

I love to stay in this home, where dozens of people lived over the years, a cabin where Butch Cassidy was welcomed as a friend. As late as 1924 babies were being born in this small cabin that had neither electricity nor running water. Now it has both and all the comforts of a modern hotel room. Yet as I lay back and look at the worm-carved ridge beam, I am still powerfully reminded of a time in the past.

This adds extra depth to what my husband and I are learning this weekend at the Untold Stories symposium at the Community of Christ Joseph Smith Historic Site here at Nauvoo, where historians and members of the two major sects that grew up out of Joseph’s teachings happily work together to learn about the past.

Today we will attend the Nauvoo temple, almost 170 years after the Saints thronged the doors, begging to be given permission to risk their lives so they could spend another two weeks completing their temple ordinances. Then we will walk with hundreds of others from the center of Nauvoo down to Water Street, the path our thousands of spiritual forebears walked as they began the arduous journey into the unknown west, away from the mobs and terrors that threatened Nauvoo.

Last night, I laid my head down under beams that protected Saints in a time of privation I can barely fathom, a time where God was not questioned, when a good man prayed that he might not have to ever shoot an Indian, despite the fact that an Indian attack on the family in childhood had left his toddler brother dead, scalped, and mutilated.

As I was preparing to post this, I tumbled across pictures for another story I meant to tell you, a story that might have remained untold.

Sandy Petersen was one of my husband’s best friends at Provo High School. Sandy Petersen also was great friends with Bill Hamblin (the BYU professor of religion). My husband and Sandy and Bill have each found their own way in the world.

In Sandy’s case, he became active in game design, both computer games, live action role playing, and board games. He designed the levels for the old computer game Doom. And he created the role playing game Call of Cthulhu. 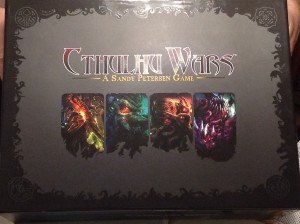 This isn’t just a shiny box of awesome fun with friends, gleefully dividing the world up after the puny humans have been demolished. It’s an unexpected story of how God loves us and loves what we care about. Even if what we care about it Cthulhu.

A while back, Sandy and his lovely bride had come to the end of a run of luck. I think the description went something like “all the credit cards were maxed out – we needed to find the next opportunity.” It isn’t that Sandy and his family were poor. It’s just that the game and entertainment business doesn’t provide its devotees with steady incomes.

As had happened many times before, Sandy and his bride sought out possibilities. A promising opportunity fell into their lap, a chance to go work in a foreign land for a good paycheck.

Being good Mormons, Sandy and Wendy took this matter to The Lord. They waited for the answer, secure in the presumption that the answer would be “Yes!” It all seemed logical and perfect.

God said, “Meh…” Actually, I think maybe God just didn’t even pick up His end of the line at all.

The offer to go to the foreign land seemed so right intellectually. But God didn’t give either of these good Mormons a sufficient thumbs up for them to move forward. And so Sandy and his bride let the opportunity pass.

Then somehow, the idea of doing a Cthulhu board game emerged. I have heard Sandy talk about the experience, how he felt, well, inspired. Everything came together: the art, the game design, the concept, the marketing, the supplier. The team launched the game using Kickstarter.

Now, if you aren’t familiar with Kickstarter, it’s a crowd-funding site where you tell the world how much money you need to successfully bring the product to market. Then you put your idea out for the world to consider. Supporters pledge money, and usually they get something in return, depending on what the product is. A thank you note. Their name of the screen of a movie theatre for a year. A deluxe copy of the game. Extra exclusive add-ons if the project meets stretch goals. For example, I’ve contributed to community gardens, new seats for my local budget movie theatre, and cool products for my own DIY projects.

Sandy and his team deliberated. In order to do this game right, they figured, it would take $40,000. They designed the kickstarter campaign, and put Cthulhu Wars out for the world to consider.

Sandy said he was pretty confident that they’d make the $40,000 project goal. The Cthulhu mythos has a strong following in the gaming community. So they launched the campaign and waited. 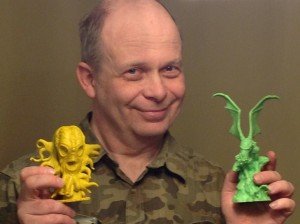 I’ve already shown you a picture of the shiny box, so I suppose it doesn’t come as a surprise that Cthulhu Wars made its goal. Cthulhu geeks around the country, nay, the world, can now do as my husband is shown doing in the picture at the left: grin and exult in the chance to play a well-designed game that builds friendships and delights the senses, based on the disturbing yet compelling stories of H. P. Lovecraft (1890-1937).

The product is exquisite and the game design (how the thing plays) is outstanding.

Let’s get back to Sandy, however, and the downright stupor of thought he and his bride experienced when considering the foreign job offer. I don’t think I’m lying if I say that Sandy would have felt adequately rewarded by the sheer flow and satisfaction he felt while bringing this game into existence. Perhaps it wouldn’t be God’s will to have every believing Mormon design horror-themed world domination board games. And yet, do I believe in a God who loves His children enough not only to save them, but to entertain them? A God who would speak stupor to the mind of a brilliant man who was about to waste his energies on a lesser good?

The delightful thing was to see how well the community responded: 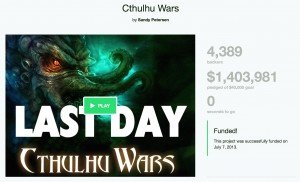 [I can’t help but compare the $1.4M raised for a game that will delight thousands of people to the paltry $0.09M one fellow is getting for spending his life to convince hundreds to turn against the faith of their youth.]

Back in the day, when Sandy was being interviewed regarding Doom or Quake, he was asked how members of his faith respond to his work, producing such games. Do they ostracize him at Church, call him to repentance, mobilize to show he is on the path of evil?

“No,” said Sandy. “The only thing they’ve ever done is ask if they can get a copy of the game…”