Those of us who chose in the pre-mortal world to come to the Earth spotted two fatal flaws in Satan’s plan to save us all.

Satan’s plan did not allow for free will and had Satan at the center. Said Satan:

“Behold, here am I, send me, I will be thy son, and I will redeem all mankind, that one soul shall not be lost, and surely I will do it; wherefore give me thine honor.” (Moses 4:1).

Jehovah’s statement, which supported Heavenly Father’s plan, allowed for free choice. This meant that some people will ultimately choose not to be saved, but the Lord, in his wisdom, realizes that you cannot force people to be good. In addition, Jehovah’s plan puts the Lord at the center. 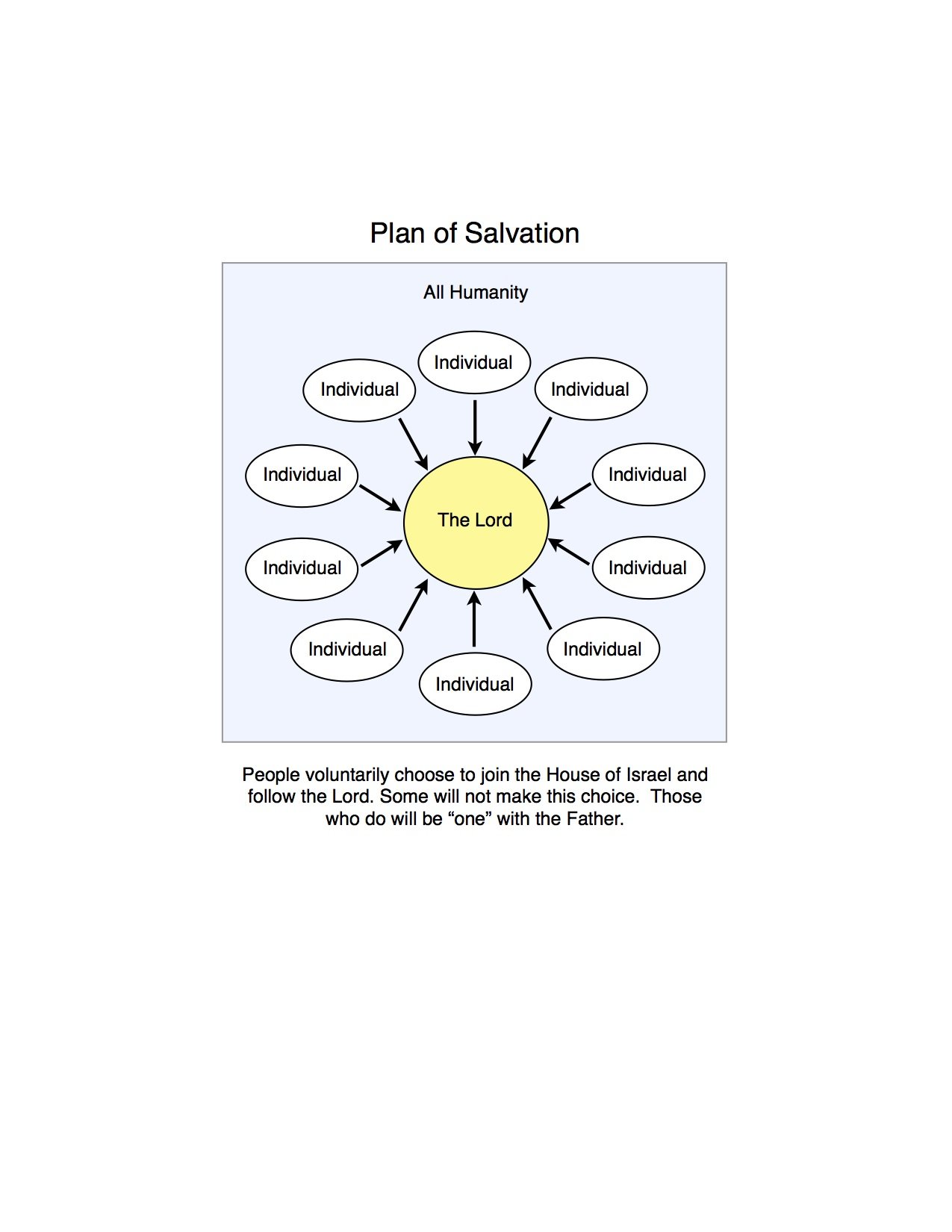 Note that Jehovah’s plan relies on individuals freely deciding to take on the name of the Lord and join the House of Israel. The Lord is at the center. Some people will decide not to accept this plan. Those who do accept it will “be one” with the Lord and will have eternal increase, meaning they will progress and become more and more like God.

Satan’s plan is a counterfeit of this plan. It looks like this: 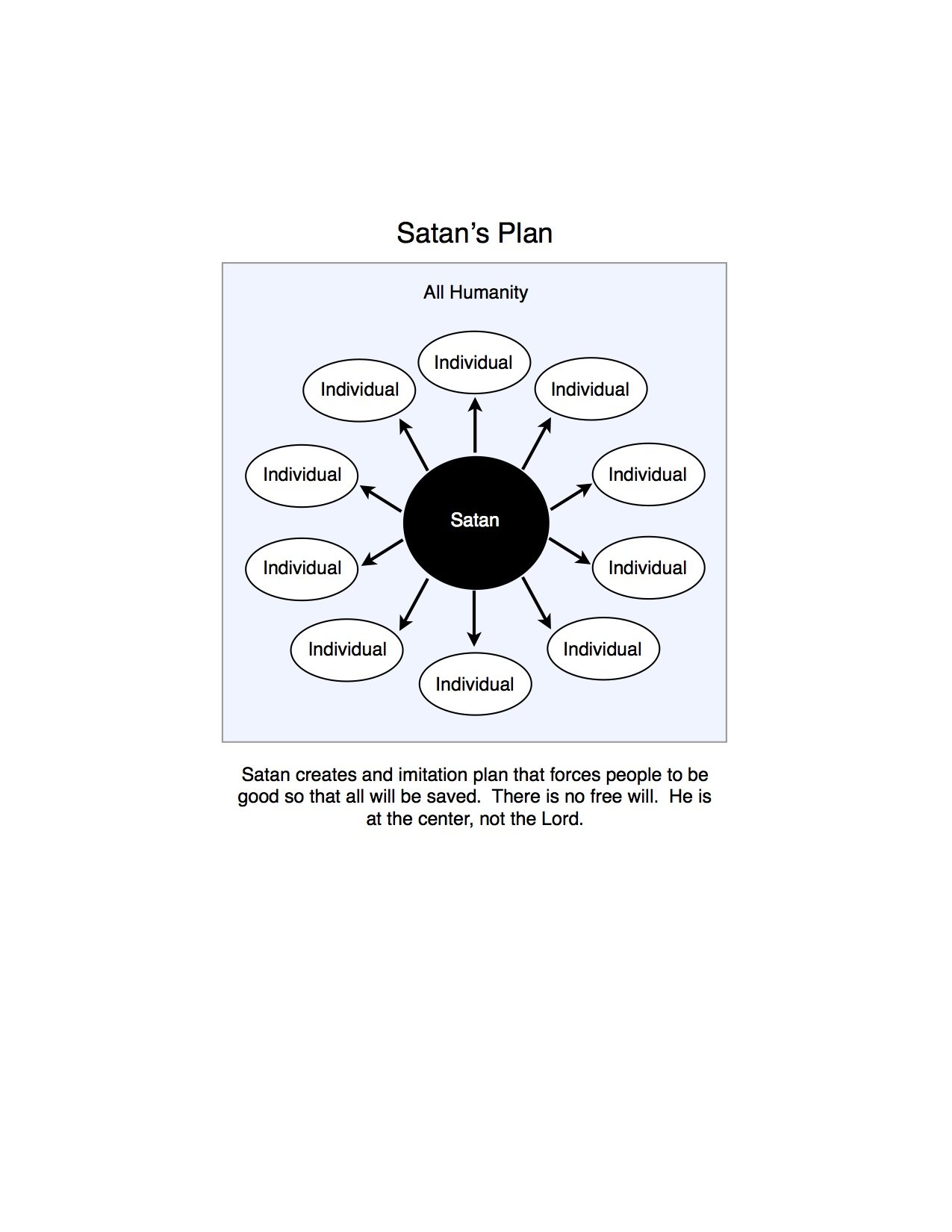 Note that Satan’s plan involves him forcing his will on others. There is no free choice. While in theory “one soul shall not be lost,” the reality is that the coercion involved puts Satan at the center of the plan, rather than the Lord. And of course Satan wants all the glory for himself.

(The first step of Satan’s plan may have been to allow people to be saved in their sins, meaning that they can do whatever they want and still be “saved.” The end game, however, was for Satan to step in and institute his own system based on controlling people’s actions.)

As humanity has lived on the Earth, it has sought models for setting up societies that allow people to prosper and be at peace. We see glimpses of models that work in 4 Nephi and in the early New Testament period. In effect, people are striving to create Zion, the ancient city of Enoch, which “the Lord called…Zion, because they were of one heart and one mind, and dwelt in righteousness, and there was no poor among them.” (Moses 7:18).

We know through modern-day revelation that creating Zion involves voluntarily consecrating yourself to the Lord through his Church. But note that the model does not include all people on the Earth. Some people will choose, for whatever reason, not to join the Zion society. Jesus recognized that some people would become lost sheep. We should seek them out and bring them back to the fold, but some of them will choose not to join Zion.

To create a Zion society, people need to be One in purpose and they need to place the Lord at the center. A Zion society looks like this: 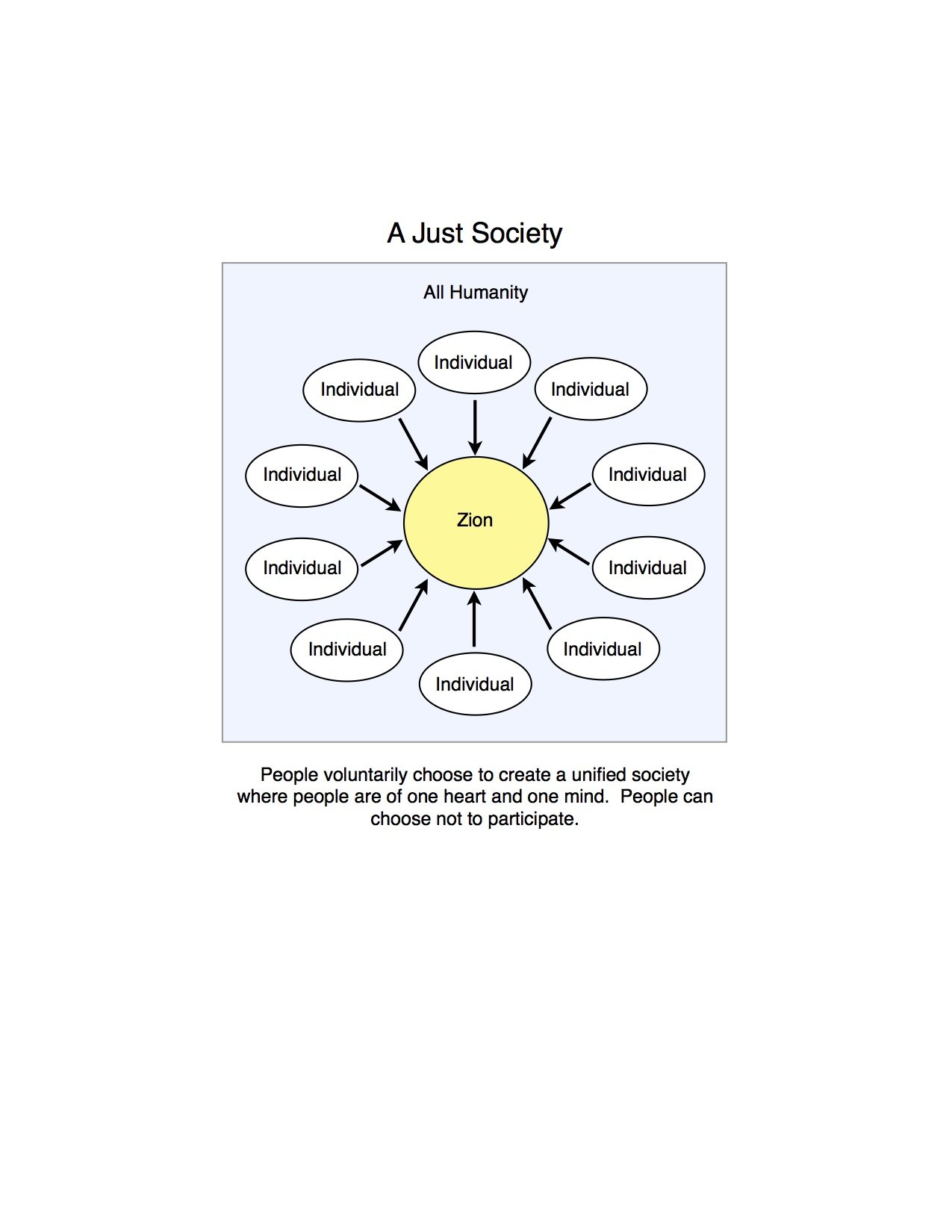 The American experience is about creating a “city on a hill” that is meant, at is heart, to create something approaching a Zion society. There has always been a strain in American history of utopianism. One of the most unique features of the American experience from the early 1600s until 1789 was the combination of personal freedom and personal responsibility to better society. This resulted in the Constitution, which enshrines the rights to “life, liberty and property” that are the center of a Zion society. This society obviously was not perfect (slavery was not abolished for many decades), but the desire for a just and perfect society comes through in the writings of all of the Founding Fathers. The goal, in the end, was a society where people governed themselves and voluntarily chose the right.

The Constitution, through its system of checks and balances, intended most of all to prevent the creation of a tyrannical government. Unfortunately, the history of humanity is that the vast majority of societies end up with tyrannical domination. All tyrants are aware that the people want peace, want justice and want prosperity. The people also want the poor to receive help, but unfortunately many people don’t want to do that often dirty work themselves. So tyrants will promise, peace, will promise justice, will promise prosperity and will promise to “help the poor.” What they will deliver is always the exact opposite. 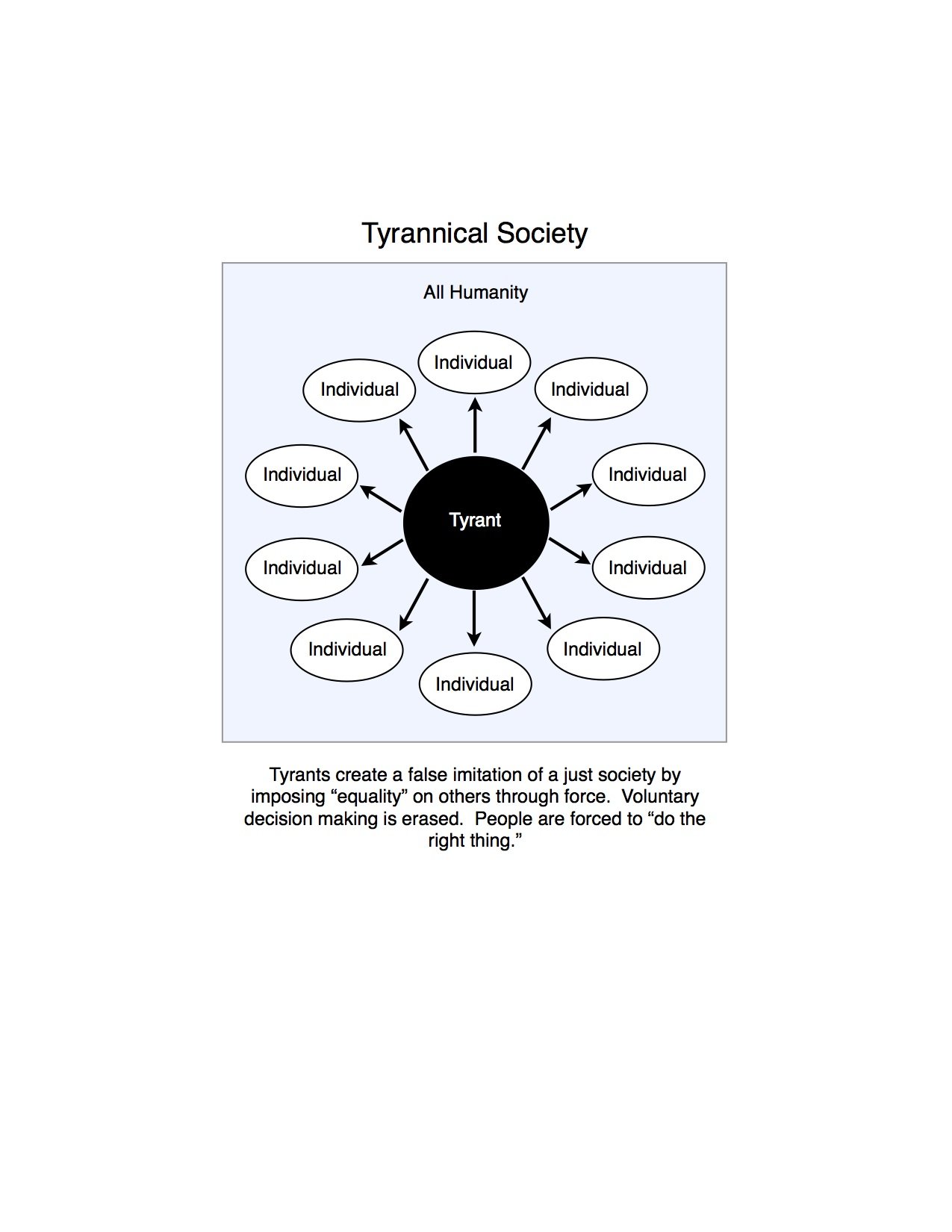 Modern-day prophets have repeatedly warned us about the ideologies that will create counterfeit versions of Zion.

“We again warn our people in America of the constantly increasing threat against our inspired Constitution and our free institutions set up under it. The same political tenets and philosophies that have brought war and terror in other parts of the world are at work amongst us in America…

“… Communism and all other similar isms bear no relationship whatever to the United Order. They are merely the clumsy counterfeits which Satan always devises of the gospel plan… Latter-day Saints cannot be true to their faith and lend aid, encouragement, or sympathy to any of these false philosophies. They will prove snares to their feet.”

Joseph Smith in the 1840s was exposed to Socialism, and said the following:

“I attended a second lecture on Socialism, by Mr. Finch; and after he got through, I made a few remarks… I said I did not believe the doctrine.” (History of the Church 6:33)

Just two years ago, Elder Uchtdorf pointed out that the world’s way of helping the poor is not the Lord’s way:

There are many good people and organizations in the world that are trying to meet the pressing needs of the poor and needy everywhere. We are grateful for this, but the Lord’s way of caring for the needy is different from the world’s way. The Lord has said, “It must needs be done in mine own way.” He is not only interested in our immediate needs; He is also concerned about our eternal progression. For this reason, the Lord’s way has always included self-reliance and service to our neighbor in addition to caring for the poor.

A true Zion society will involve people voluntarily choosing to be one. This will naturally grow into seeing all people as our brothers and sisters. We will rejoice in helping people who need assistance. There will be no coercion.

The false model always ends up with some tyrant — or group of tyrants — forcing people to do things they do not want to do. These tyrants will always tell people that they must bring “equality” or “social justice,” but it is always their version of equality and social justice imposed by force on society. Inevitably, these tyrants benefit financially from the unjust society they create. This is the exact opposite of Zion.

The crucial building-block of a Zion society — and in fact the Lord’s creation of the House of Israel — is a family headed by a mother and a father. The Proclamation to the World on the family says:

WE, THE FIRST PRESIDENCY and the Council of the Twelve Apostles of The Church of Jesus Christ of Latter-day Saints, solemnly proclaim that marriage between a man and a woman is ordained of God and that the family is central to the Creator’s plan for the eternal destiny of His children.

The Lord is at the center of this relationship, which looks like this: 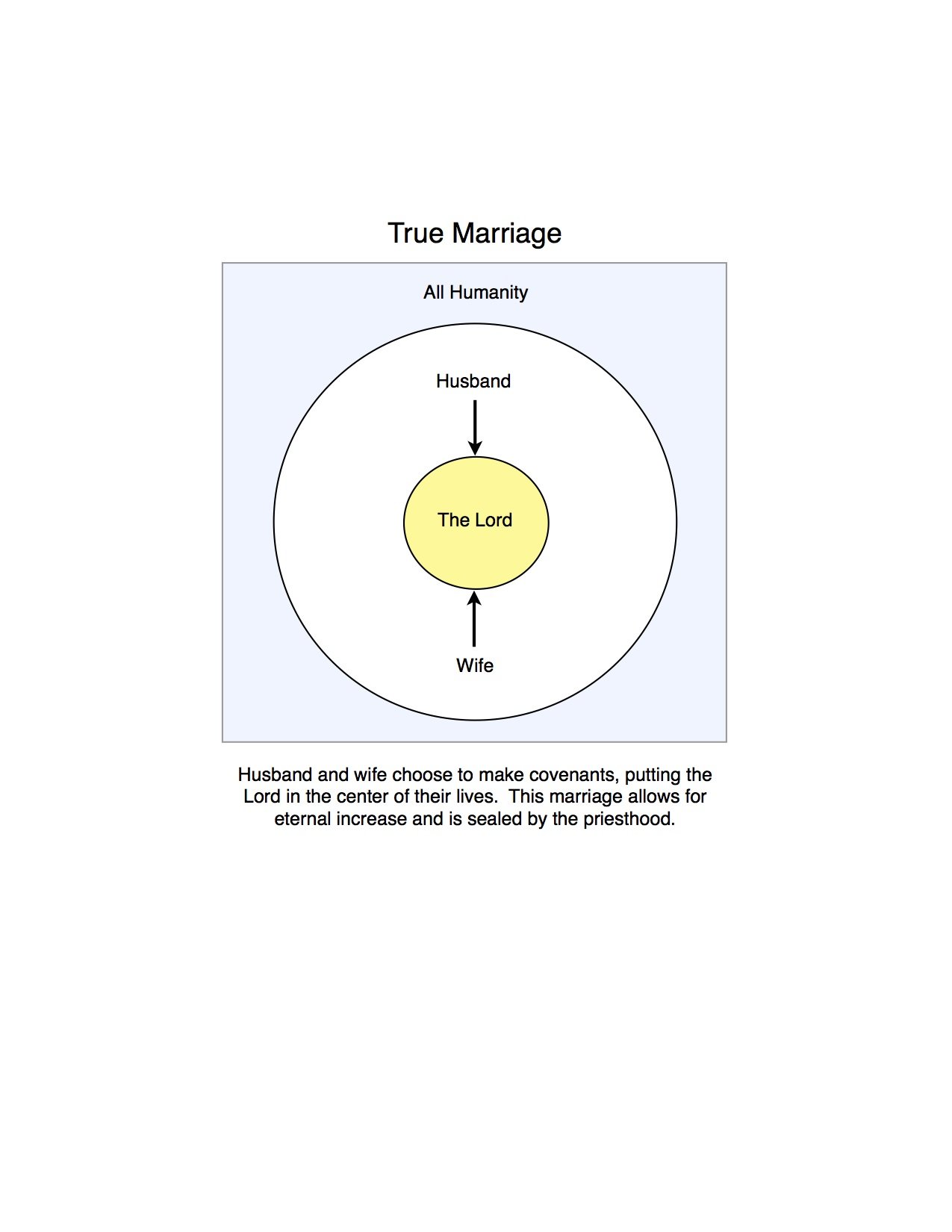 The world has seen many counterfeit models of this relationship over time. Marriage has been used for financial reasons, or to create dynasties that have nothing to do with a lasting, loving relationship. People have casually entered into marriage, only to ignore vows taken just a few days later. And now we are seeing same-sex attraction and bonding being called “marriage.”

Here is a counterfeit version of marriage: 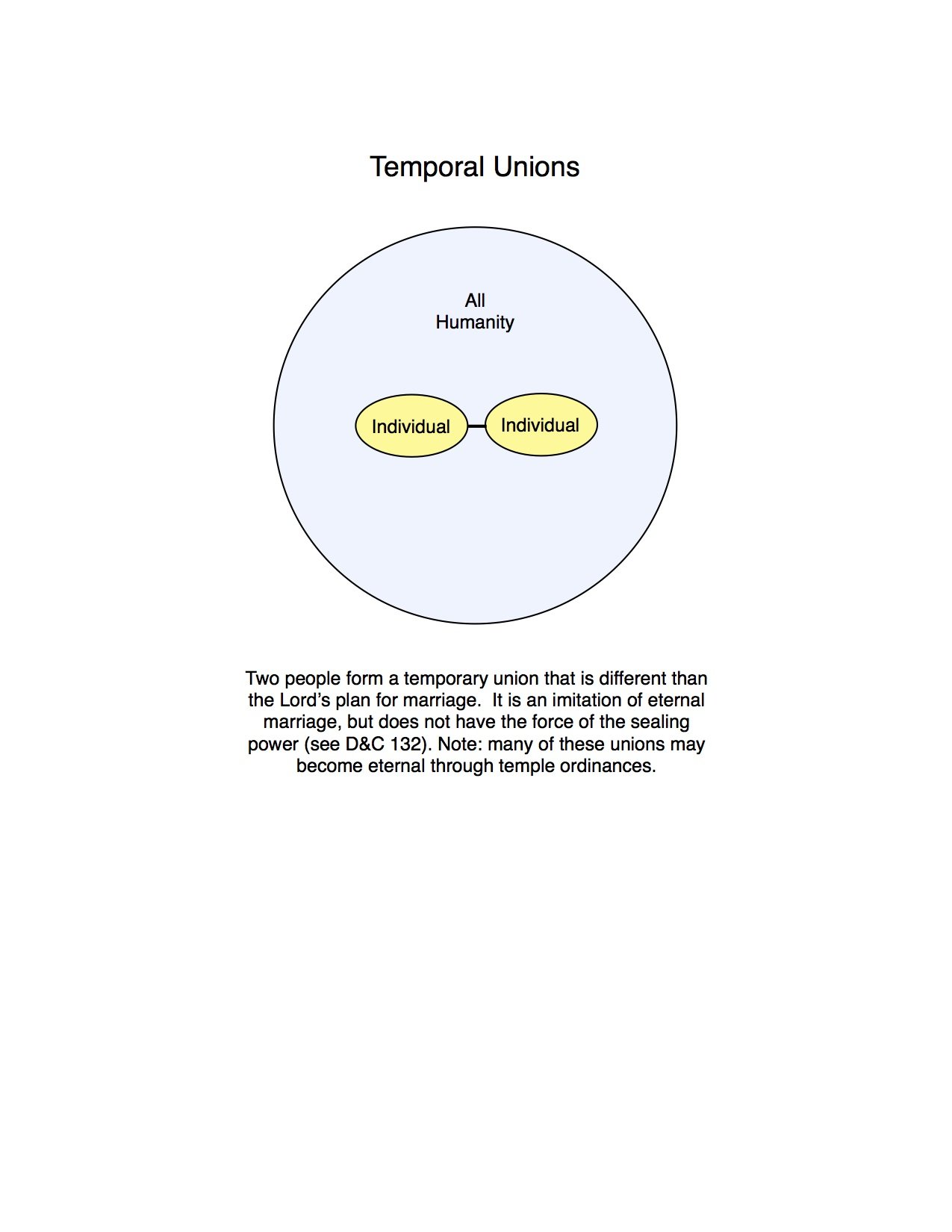 Notice that this type of union does not put the Lord at the center of the relationship and will not last over time. The Lord says in D&C 132:15:

A close reading of D&C 132 makes it clear, in language that is legalistic in nature, that the Lord only recognizes marriages that are sealed through priesthood power. Marriage has a very specific definition, and this cannot be changed by the world. The good news is, however, that true marriages based on love and mutual respect can be sealed after people have died for time and all eternity in the temple. The Lord’s plan provides a way of solemnizing these marriages after people have died.

Before we came to the Earth we saw Satan’s plan for the counterfeit that it was. Now it behooves us to continue to watch for counterfeit plans and reject them. We can recognize the true plans if we follow modern-day prophets and the scriptures.

16 thoughts on “True and counterfeit plans through the eternities”