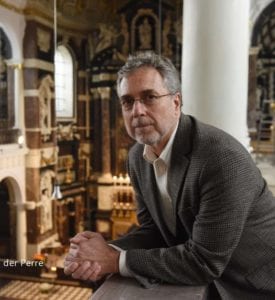 It is clear Luther suffered from Toxic Perfectionism, a condition that in his day was thought of as “overscrupulousness,” a common peril for monks in Luther’s day. When one’s entire life was focused on devotion, it became easy to see the myriad ways one had fallen short of the possible. Luther’s inability to believe himself saved within a paradigm that required any works caused him to spearhead the movement that became Protestantism. Luther proclaimed that mankind is saved by grace alone.

Some Mormons regard Martin Luther as a hero. While this could be true, most of the things that Luther was against, Mormons would be for. In fact, Mormonism has more in common with Catholicism than it does with most Protestant belief systems.

500 years ago this October, Martin Luther famously nailed his 95 theses to the church door in Wittenberg, the act that is seen as the beginning of the Reformation and the rise of Protestantism. In celebration of this world-changing event, BYU professor Craig Harline has written A World Ablaze: The Rise of Martin Luther and the Birth of the Reformation.

As an educator, Harline tries to teach Luther on his own terms instead of trying to fit him into a Mormon paradigm. Years of teaching the Reformation to college students have shown him that most Mormons don’t know much about this period, and what they do know is usually wrong.

1 thought on “Toxic Perfectionism and the Reformation- LDS Perspectives #58: The Martin Luther that Mormons Don’t Know with Craig Harline”