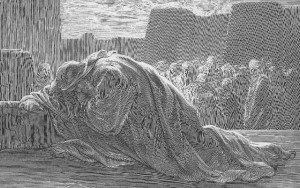 The other day, as the missionaries visited us, we discussed repentance.

My daughter and I both thought of our foreign language experience and proposed that repent seemed to come from the Latin for “think.” Thus, re-pent would seem to mean re-think.

I happily looked up the etymology of the English term repentance, and was dismayed to find that my insight was not accurate. Yet the search also brought up articles discussing scholarly disagreement on this point.

At this point, inspired by Reid Litchfield’s exploration of the original Greek and Hebrew terms in the Bible (related to slavery), I dug further to see which Hebrew and Greek words have been translated as “repent.” I found the following at Bill Fallon’s Free Grace Resources, discussing the three words translated as a form of “repent”:

“Nacham” is used 108 times in the OT and is translated some form of “repent” 41 times. It is translated as “comfort” or “comforter” 66 times. Whereas “shuwb” means something similar to “turn” or “return,” “nacham” has a different meaning similar to being “eased” or “comforted.” Neither word seems to have the identical meaning as the most common New Testament Greek word for “repent” (metanoeo), which basically means ” a change of mind.”

If we consider a view that God is our Father, a beloved parent acknowledged by us as God before this life, then the idea of returning and being comforted make perfect sense for “repent.”

Once we get to the New Testament, we are faced with a Hebrew nation that has strayed sufficiently far from the God of Abraham that the establishment rejects the Christ. And then in the epistles, we are speaking to the non-Hebrew individuals who are encountering the gospel from the perspective of a completely different religious background. In the context of these two wayward audiences, a word that means “change of mind” makes better sense than just “comfort” or “return”.

With these ancient words in mind, then, the commandment we’ve been given to “Cry repentance unto every people” takes on, perhaps, a different sense. We are crying unto the world to return to the God they loved before this life, to be comforted in His eternal and loving embrace, to change the thoughts that have made them strangers and foreigners to the God and parent who loves them.

The Bible tells us “As a man thinketh in his heart, so is he.” 1 This premise was picked up by James Allen in his 1903 book, “As a Man Thinketh,” arguably the first in the genre of self-help books.

To illustrate how thoughts affect behavior, let me relate a little-known story related to Elder John Taylor, who would become the third President of the LDS Church. This story occurred in the winter of 1847/48 in Salt Lake Valley.

When the Mormons had prepared to leave Nauvoo in the winter of 1845/46, they had been counseled to prepare a year’s supply of food stuffs. It was known that 1846 would be consumed in travel and that the fugitive Saints would not be able to plant and reap a harvest. Not everyone heeded counsel, however.

The exodus from Nauvoo went less well than hoped. Instead of reaching the mountain haven in the Rocky Mountains by late fall, the Saints only made it to the eastern border of Nebraska, a site they termed Winter Quarters. Over 300 souls would die that year, many from scurvy 2 caused by a lack of fresh vegetables. 3

Early the next spring, Brigham Young and others blazed a way west from Winter Quarters, but didn’t arrive in the Salt Lake Valley in time to put in a proper crop. Word was sent out to the Battalion veterans to stay away from Salt Lake Valley, and further emigration from Winter Quarters was similarly discouraged. The few who were trapped in the small compound in the valley prepared for another long winter without adequate food.

Unbeknownst to the Saints, they had brought with them European bacteria and viruses previously unknown to the Mountain West. The local Indians began to suffer from illness. The son of a local chief was particularly ill. In time it appeared the child would die, and nothing the Indians knew could halt the deadly illness.

Desperate, the Indians approached the Mormons, asking that the new people minister to the child. It was a quandry for the Saints, because if the child died anyway (as the Saints knew all too well sometimes happens, despite blessings), the Indians could be transformed into implacable and deadly foes. But John Taylor did go and minister to the boy.

Several days later, the Indians approached the Saints forts. Instead of war, they brought sorely needed food. This is where the Saints learned about thistle root and sego lily bulbs as food. The Indians also brought a savory meal of unknown origin. The Saints gratefully accepted the gifts.

The nutty meal was a great favorite of all, particularly John Taylor. All too soon, the meal was gone. With the loss of this particular food, the more vulnerable members of the community began to suffer, notably the pregnant women. Seeing their distress, John Taylor took it upon himself to petition the Indians for more of the meal.

Recall that this was not our day. One couldn’t just go to the store and ask for more. Populations tended to only create the food they themselves needed. So John knew that going to the Indians at the end of winter asking for food, when the Indians had already shared so generously, was likely to prove an unprofitable trip. Yet the distress of the women and children was so great that he had to try.

When John arrived, the Indians were very happy to see him. In some manner John communicated the need of his people. To John’s gratification, the Indians seemed happy to accommodate his request. But they would have to harvest more.

John returned to the forts with the meal. As the protein-rich meal was passed around, John refused his portion. His family noted this in their later histories, seeing this as a sacrifice John was making to ensure that the meal would last until spring and summer brought other sources of protein.

However a detailed account from 1850 informs us regarding what John now knew and why he had changed his mind about the nutty meal.

Major Howard Egan observed how the Indians harvested the raw materials for the nutty meal and recorded his account for posterity. First the men would dig a long curved trench. The trench would be filled with dry grasses.

Next the men and children would walk several hundred feet away from the trench, fanning out in a semi-circle focused on the trench. As one, the began to whoop and hollar, beating the grass and bushes before them. Slowly they walked forward, continuing their hollering and thrashings.

At the half-moon-shaped trench, the first waves of harvest arrived – anabrus simplex, a species of wingless katydid now known as Mormon crickets. These katydids can hop forward about a foot at a time, but are not able to hop up. Thus, they were trapped in the shallow trench.

As the men and children neared the trench, the trench filled to capacity with a writhing mass of the katydids. When all the Indians were again gathered near, the trench was set on fire. After a brief, hot flame, the fire extinguished itself.

The roasted insects were then gathered by the women, who ground the mass into the savory “nutty” meal, the same sort of meal that had saved the lives of unknown numbers of 1847 pioneers.

One can understand why John Taylor refused to eat the nutty meal, once he knew its full origins. Obviously it isn’t that there is anything inherently wrong about eating bugs. But the English don’t delight in eating bugs. And John was born in England.

So we could say that John repented of eating the nutty meal, in that he changed his mind about whether he personally was able to stomach the stuff, knowing that it was made of mashed up bug bodies. Thankfully, he didn’t run around the forts screaming “The nutty meal is bugs!!!!” 4 And thus he allowed those who did need to eat protein the sustenance they needed.

There are things we do that, in the sight of God, are as objectionable as eating ground up bug bodies. Moreso, perhaps. As we come to know God, out eyes will be opened, and we will see ouselves as He sees us. We will come to rethink certain of our past behaviors as we begin to see them as disgusting. Inasmuch as those past behaviors have caused harm to ourselves or others, we will be able to call upon Christ and His power to heal all wounds in eternity, and many wounds even in mortality.

Thus, as we cry repentance to every people, we are calling them to return to God, to be gathered in His loving arms, to change their thoughts to God’s thoughts, and, from that exalted perspective, act as God would have them act.

Note: The illustration I included in this post is a detail from Gustave Doré’s Ezra Kneels in Prayer. This is particularly apropos as Ezra was charged with bringing Zion out of captivity and purifying the people.

9 thoughts on “To Repent”