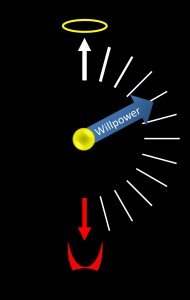 For the past twenty years a narrative has been building steam. Willpower, it appeared, was a consumable commodity. If you used up your willpower too early in the day, you were left defenseless by evening, unable to continue making right choices.

A previous generation was known to say, “The devil made me do it!” Moderns were able to say with scientific verve, “I just ran out of willpower.”

Then junior scientists such as Evan Carter attempted to replicate the famous willpower experiments, only to be unable to repeat the results. A meta study of prior results was attempted, only to show no effect of “ego depletion.”

The formal Association of Psychological Science (APS) reports are not yet published, but the uncopyedited, unformatted reports can be reviewed at the APS website, and will be replaced by the published versions as soon as they are final.

For those of us wishing for a shorter synopsis, Daniel Engber wrote a cover story for last month’s Slate regarding the paradigm shift, titled Everything is Crumbling.

This mythos of the consumable willpower had been particularly damning with respect to rigorous faiths such as Mormonism. Popular wisdom proclaimed that so much self control had to be bad. Why waste the precious quantity of willpower on such silly frivolities as controlling thoughts, avoiding coffee, tea, and tobacco, or making any choice that denied the “natural man?”

It is unclear what, if any, impact this belief in consumable willpower has had on those now self-declared as “Nones.” How many others, still attempting to retain some level of faith, have felt they must yield to powerful urges to give in to temptation, to preserve their precious “willpower” for the few decisions they felt were in fact crucial to their futures?

It’s still silly to attempt rigorous tasks without sufficient preparation. Go ahead and eat before going grocery shopping. Don’t surround yourself with cookies and chips if you’re trying to eat a healthy diet. Don’t try to give up drinking by frequenting bars.

But you no longer need to feel like you are incapable of resisting temptation after a hard day. You don’t need to fear obeying the commandments at the expense of achieving other goals.

18 thoughts on “The Myth of Ego Depletion”