In April 1843, in the small village of Kinderhook, Illinois, Robert Wiley dug a deep shaft into the center of a nearby Indian mound ( to read the previous post about mounds click here). Wiley claimed to have had dreams in which valuable treasure was hidden in the mound. At first, Wiley dug the hole alone, but after a few days, Wilbur Fugate, Bridge Whitten, WP Harris, and few other men came to assist him. Soon after the men commenced digging they “found” six small bell shaped plates of copper held together by a ring. Also unearthed was a skeleton of a nine foot man.  WP Harris took the plates home to wash them with sulphuric acid. Once the plates were cleaned, strange markings were revealed which appeared to be Egyptian hieroglyphics.

The Kinderhook plates, as they came to be known, were taken to Nauvoo and as reported in the Nauvoo newspaper, Times and Seasons, the plates were shown to Joseph Smith and he was able to decipher the symbols written upon the plates. The article touted the Kinderhook plates and Joseph’s translating skills as further evidence of the credibility of the Book of Mormon. There were also mentions of the Kinderhook Plates in the Warsaw Signal and the Nauvoo Neighbor:

“Why does the circumstance of the plates recently found in a mound in Pike County, Ill., by Mr. Wiley, together with the ethnology and a thousand other things, go to prove the Book of Mormon true? – Ans. [Answer] Because it is true!”

“The new work which Jo. Is about to issue as a translation of these [Kinderhook] plates will be nothing more nor less than a sequel to the Book of Mormon…”

“The contents of the plates, together with a Facsimile of the same, will be published in the ‘Times and Seasons,’ as soon as the translation is completed.”

William Clayton, a secretary of Joseph Smith, recorded in his journal: 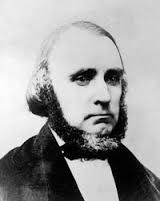 “President Joseph has translated a portion, and says they contain the history of the person
with whom they were found; and he was a descendant of Ham, through the loins of
Pharaoh, King of Egypt, and that he received his kingdom through the ruler of heaven and
earth.”- William Clayton 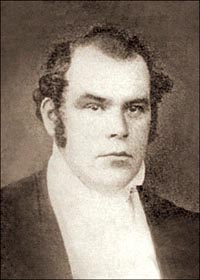 “Six plates having the appearance of Brass have lately been dug out of the mound by a gentleman in Pike C. [County] Illinois. They are small and filled with engravings in Egyptian language and contain the genealogy of one of the ancient Jaredite back to Ham the son of Noah.”

And then… nothing happens; Joseph himself never mentions the incident and the Kinderhook affair is swept into time. The event is kept barely alive as a sensationalized tale told around LDS circles, until James T. Cobb, step-son of Brigham Young, wrote to Wilber Fugate in 1879. Fugate responds:

“I received your letter in regard to those plates, and will
say answer they are a humbug, gotten up by Robert Wiley, Bridge Whitten, and myself. We read in Pratt’s prophecy (a missionary tract written by Parley P Pratt) that ‘truth would spring up out of the earth.’ We concluded to
prove the prophecy by way of a joke… Bridge Whitten cut them [the plates] out some pieces of copper Wiley and I made the hieroglyphics by making impressions on beeswax and filling them with acid and
putting it on the plates.”

Unfortunately the church’s enemies got ahold of this “joke” and used it many times over in their arsenal of evidences against Joseph’s prophetic abilities.

Adding to the muddle was the History of the Church, an official publication, written and complied by several individuals who essentially put words into Joseph Smith’s mouth, after he was dead, and not all of what they wrote was factual. Historian D. Michael Quinn explained,

“Joseph Smith’s autobiographical “History” was written in large part after his death by clerks and “historians” who transformed third-person accounts by others than Joseph Smith into first-person autobiography of Joseph Smith, and that between the first serialized publication of the history

(1840s-1860s) and the seven-volume edition of the History of the Church in the twentieth century, there have been thousands of deletions and additions not noted in the text or footnotes. This is certainly all true, and as an historian I regret the confusion that such editorial practices have caused. Nevertheless, until quite recently official LDS history was written by men (often of limited education) who were not trained in methods of editing and history.”

Quinn goes on to explain that this was normal scholarship for  the early 19th century America.

LDS Historian Stanley Kimball acknowledged the clever joke had been played upon the Nauvoo Mormon  population and he said,

“The time has come to admit tha the Kinderhook plate incident of 1843 was a light-hearted, heavy-handed, frontier-style prank, or ‘joke’ as the perpetrators themselves called it.” – Stanley P. Kimball, Mormon scholar, in the The Mormon Association Newsletter

Finally with the compilation of the Joseph Smith Papers the truth about what really happened with the Kinderhook plates has come to the light.  Historian Don Bradley gave an entertaining and enlightening presentation to read here or watch it here. Bradley, reveals, fellow Joseph Smith Papers historian, Mark Ashurst-McGee, and himself have unraveled the Kinderhook plate mystery.

Just to give you an idea, here is an informative graphic from his paper: 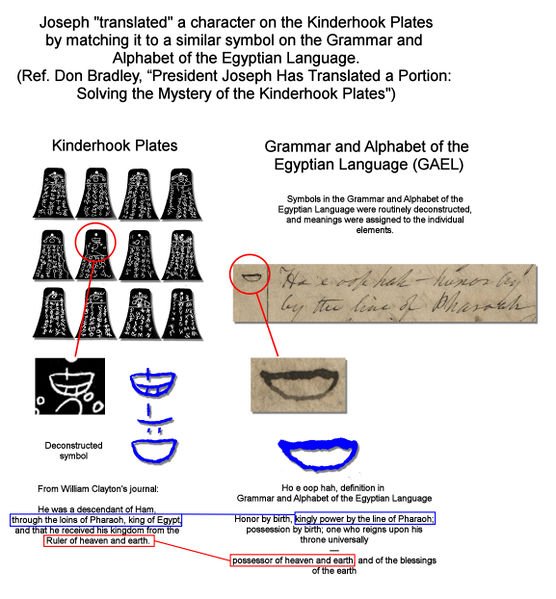 Bradley and Ashurst-McGee reveal Joseph Smith was indeed shown the Kinderhook plates and was asked the translate them. In Joseph’s papers we find that he had a copy of a book called  Grammer and Alphabet of the Egyptian Language which he consulted to give his secular personal opinion of one lone symbol which was repeated several times on the plates. The Kinderhook plates event was of so little importance to Joseph Smith that he failed to mention the incident in his own journal. Clayton and Pratt and others impulsively and erroneously inferred Joseph’s “interpretation” of the Kinderhook plates as a spiritual rather than a secular event. Don Bradley gives an enjoyable presentation of how it all was discovered.   Kudos to Mark Ashurst-McGee and Don Bradley for brilliantly solving the mystery!! 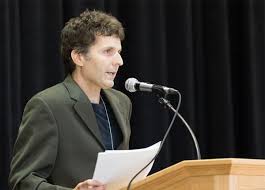 There is a moral to this story, Dear Reader, which is…there are a lot of goofy stories out there about Joseph Smith. Don’t be so gullible to believe everything you read/hear. The wisest course of action to maintain is, unless there is a verifiable account written or signed by Joseph Smith, what others said, he said or did, is only pure speculation.

20 thoughts on “The Mystery of the Kinderhook Plates, Solved!”