In 1934, the Tennessee Valley Authority (TVA), was constructing a dam which would flood a portion of the Clinch River in East Tennessee. Because the area to be flooded included a Hopewell Native American mound, a group of archeologists were called in to excavate the site. The archeologists came upon an amazing discovery when they uncovered the ruins of a large stone and wood structure. So unlike any other find found at a Hopewell site, British Egyptologist, James Rendel Harris from the London Museum, was consulted. At the site, Harris identified the structure as an “Egyptian Temple”. A single newspaper article documents this account.

When European colonists settled North America they found immense earth mounds and earthwork enclosures, larger than Giza in Egypt. Manifest Destiny and all that, it seemed prudent to plow it all under.The vanquished Native inhabitants were deemed ignorant savages. In regards to the Native Americans, consequentialism was the morality of the day, in other words “the ends justify the means”.

“The geography of the Book of Mormon has been a complex issue with multiple factors involved.  For example, when the book was first published, it was commonly thought that Native American Indians had never achieved the level of “civilization” as defined in the book Ancient Society by Lewis Henry Morgan which had become the handbook of instruction for the US government in dealing with the Indians.  Morgan proposed that all human societies evolve through three stages of development, from being ignorant savages (a term he then used to label the Native Americans) to barbarism and finally on towards civilization.  John Wesley Powell, Ephraim George Squier and Morgan were three highly influential men in science, politics and Native American affairs, governing such organizations as the AAAS (American Association for Advancement of Science), the Bureau of Ethnology, the Smithsonian Institution, the Bureau of Indian Affairs and were very active politically.  Both Powell and Squier’s fathers happened to be Methodist ministers in Palmyra New York in the 1820’s when the Book of Mormon was first published and these men began what non-Mormon scholars have called the “wanton destruction” of the ancient history of the Mound Builder civilization.” -Rod L. Meldrum  see:http://www.firmlds.org/feature.php?id=19

Over parts of the eastern half of the United States, farmers put their plows to what they wanted to believe was virgin turf. They uncovered arrowheads by the bucketfuls, clay pots, long metal “knives” and occasional stone boxes with the bones of the dead. Thousands of mounds and earthwork stockades were leveled with shovels.  Native American pottery, and other artifacts, and even the bones themselves sometimes made it into private collections. For the most part the metal was melted down and recycled. For a time, bones were ground up into fertilizer, and the unwanted artifacts were thrown into trash piles. European civilization was the victor, and it was in the best interest to promote a Anglo-Saxon version of history. As the immense earthworks were leveled, the North American Native population was completely conquered by wiping away the history and accomplishments of the ancient inhabitants.

Least we frown and waggle our forefingers at our European ancestors with our modern 21st century morality; this conquering business was nothing new to humanity. One group of humans subduing another group of humans seems to me pretty typical human behavior. Conquerors all over the world, throughout recorded history, and across all civilizations, have made it part of their conquering to erase the traces of the previous dynasties. 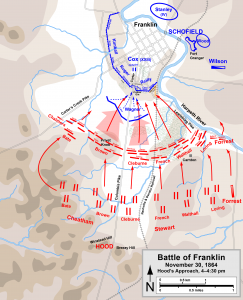 A perfect example of what occurred in the eastern US, both north and south and including the mid-west, happened where I live. Just south of the town of Franklin Tennessee, on the southern edge of the Eastern flank of the Battle of Franklin where the Army of the Ohio soundly beat the Army of Tennessee on that fateful afternoon of November 30, 1864, is a completely demolished Hopewell Mound Site of the Mississippian period (900-1450AD) identified as the DeGraffenreid Site.

Our house sits on the edge of a ridge just a few yards from a large bend in the Harpeth River, right outside of the approximately 20 acre DeGraffenreid Site in a quiet middle-class subdivision of modest red brick homes. Most people would never guess the rich and varied history of land which has been inhabited by humankind for at least a thousand years. I, in fact did not know about the DeGraffenreid site literally right under us, until very recently, and we have lived here for 22 years. 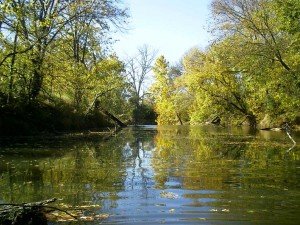 To give you a little history lesson, Dear Reader, the first known inhabitants of our little piece of heaven were the Hopewell Natives of the Mississippian period. Later American settlers, most notably a family of moonshiners who spanned several generations, before, during and after the Civil War, who proudly claimed to be the “biggest moonshining outfit in the county” lived on our property situated between a narrow neck of  land between the 20 acre DeGraffenreid site and 5 Mile Creek which empties into the Harpeth River. The moonshiners were shut down in the 1930’s by a no-nonsense county sheriff who filled the family car with bullet holes and threatened to do the same to the family if they didn’t cease and desist with the illegal distillery. During the Civil War, several skirmishes happened nearby and a Confederate Calvary regiment commanded by Major General Nathan Bedford Forrest camped on our property after the Battle of Franklin.

The DeGraffenreid mounds, one large and eight significantly smaller, were enclosed by an immense stockade. Farmers in the 1800’s greatly damaged the site by leveling the mounds and the stockade. Amateur archeologists shortly after the Civil War carted off some of the artifacts. At the turn of the last century, an early Monsanto company mined the area for phosphate, so by 1919 all traces of the mounds were gone. 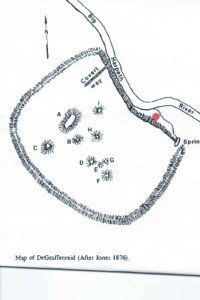 Red dot is where the Benson homestead is probably located

After extensive damage was done, during the late 1960’s, we can thank University of Tennessee-Knoxville archeologist H.C. (Buddy) Brehm who visited the site and conducted a meager salvage of the remaining items and more importantly provided documentation of the  DeGraffenreid site. Without Mr Brehm we would know, even less, of the DeGraffenreid site. Unfortunately where these relics are today, cannot be determined. An interesting bit of information from burial mound H1:

I did a little digging to find out more about Buddy Brehm and I came across this forehead slapping tidbit: 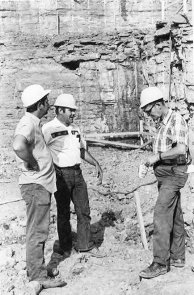 “During this time there was not a State Archaeologist or antiquities laws in Tennessee, nor were there any universities interested in the archaeology of the region. State laws did not yet protect prehistoric human remains, and when an ancient graveyard was encountered during development, the graves were open to whoever wanted to dig them. My memories from that time include seeing Boy Scout troops digging graves to earn their “Indian Lore” badges, and housewives digging with their kitchen utensils. SIAS members were also present on these sites, though with the intention of recording as much information as possible before graves were bulldozed away. ” John T Dowd

If this all weren’t so tragic, it would be really hilarious in a Keystone Cops kinda way. Think about it, Dear Reader, if this chunk of tantalizing history could exist unknown to me, a person who loves history, right under my nose for two decades….

This brings us to Wayne May and Rod Meldrum. Neither of these gentlemen hold degrees in history or archeology, but instead are Book Of Mormon enthusiasts who are able to think outside the box and have spent many years studying and visiting the Hopewell Civilizations, documenting their discoveries. They maintain that the destruction of other Hopewell sites, similar to the DeGraffinreid site, was repeated over much of the eastern half of the United States, including the mid-west. May and Meldrum believe the North American Hopewell civilizations were the People of Lehi and the Jaredites, and the events described in the Book of Mormon played out not in Mesoamerica, but right here in the United States. May and Meldrum have amassed an amazing amount of data to support their claims. 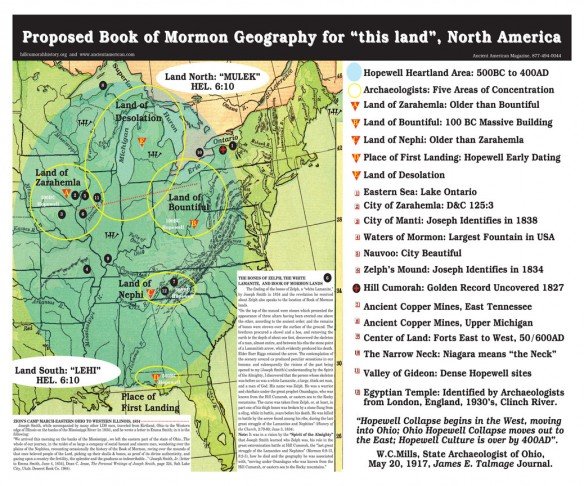 You can look at the vast evidence they have collected in two presentations available on Youtube. These presentations by Wayne May are long, but well worth your time. We popped a whole lotta popcorn and watched the videos for a couple of Family Home evenings (parent, young adult, high school and elementary age family members). I am happy to report a good time was had by all.

27 thoughts on “How Manifest Destiny Destroyed Book of Mormon Evidence”